“The junior league coaches in Sweden don't take on the responsibility of encouraging young players to care about school or to think about life after hockey”, Mikael Renberg explains.

When Mikael Renberg debuted on the ice for the Philadelphia Flyers in 1993-1994 at the age of 21, he had put all of his energy into hockey since the age of 16. Now he had all the opportunities in the world to become one of the great Swedish stars in the NHL. His life's journey began: a journey and an adventure which few get to experience, but many young hockey players dream of — life as an NHL superstar. Mikael Renberg soon became a hero on the ice and found himself right in the big, crucial and thrilling moment.

“The joy you feel in your whole body after an important victory. It gives you such a buzz. You're so damn happy with yourself. You work incredibly hard for so many years, and then you get paid in success — it's an unbelievable feeling. You can't beat it. It's a feeling I know I'll never have again, now that I've retired”, says Mikael Renberg.

From the golden years in the NHL, he remembers in particular the flights home to Philadelphia in the hockey team's chartered plane after an away victory, sitting and sharing a beer with his teammates, eating good food and celebrating the victory together. Then of course there were all of the luxury hotels, the star status and the first ecstatic telephone calls home to his parents in Piteå in the middle of the night, just to talk about the goal he scored in a match, so that would know that it was all going well for him, their son, very well indeed - it was a time for celebration. 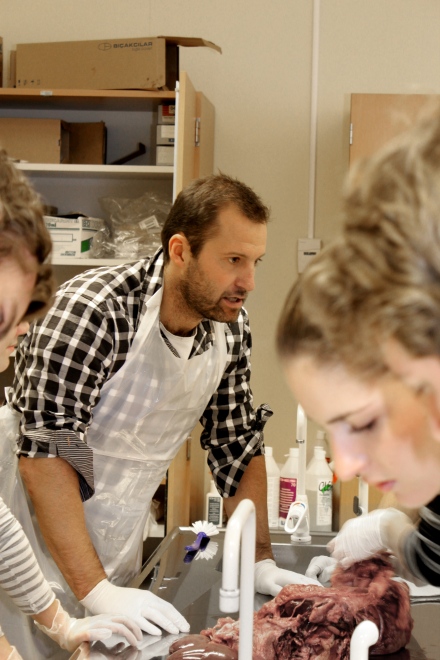 Between 1995 and 96 he formed, together with John LeClair and Eric Lindros, the successful "Legion of Doom" forward line in the Philadelphia Flyers. His entire life rotated around hockey. Mikael Renberg was in the spotlight, even in his personal life, not least in the Swedish media; the confident, calm Norrlander who battled on the ice against the best players in the world, in the NHL.

“But everything has a beginning and an end. Even hockey. It is a career which ends early; as a pro, around the age of thirty-five”, says Mikael Renberg.

When he realised that his hockey career would soon come to an end, he didn't want live his life as though it was after the play-offs - waking up in the morning with an empty feeling.

“I have enough money from my hockey career to not work another day in my life. But that doesn't do it for me. When hockey was over, I wanted a new goal in life. I wanted to have a meaningful existence”, says Mikael Renberg.

What many people don't know is that Mikael Renberg began studies at Komvux as a 20 year-old, on his own initiative. During high school, he had a hard time combining school with hockey at the A-team level when he began as a 16 year-old. When his career as a hockey pro took off in the USA, he had managed to complete almost all of his high school studies at Komvux.

Now he finished the studies he started years ago at Komvux, took the high school exams and applied for a physiotherapy programme at Luleå University of Technology - and got in. In the autumn of 2011, he started at Luleå University of Technology; it was a whole new world for him. Leading up to the first exam, he was so nervous that his hands were shaking. But he's doing well in his exams, he's happy, and he is persistent and single-minded.

“I'm not the smartest in the class, but I’m definitely ambitious”, he says with a confident smile.

But he has heard tales of many that dedicated a lot of their youth to the hockey dream and neglected school entirely. Then all of a sudden they're left alone with no hockey and no grades. With his experience as a hockey pro and all of the years training to get there, Mikael Renberg now turns his criticism on the Swedish Ice Hockey Association. He says the junior league coaches in Sweden don't take on the responsibility of encouraging young players to think about school, keeping in mind life after hockey.

“I don't think everyone needs to go to college or university, but studying opens up more opportunities in life, and I think the coaches in the junior leagues should take more responsibility for their players when it comes to thinking about school. They could for example have obligatory study sessions during cup tournaments”, says Mikael Renberg.

"When hockey was over, I wanted a new goal in life", says Mikael Renberg.

Despite this, he is very critical about the idea of mollycoddling elite players and feeling sorry for them after their sporting career. Instead, retired sports stars should understand that it is a privilege to have had the opportunity to live this kind of life and that new goals need to be set for themselves.

“We need to do what everyone else in society does; think about where we want to be and strive to get there. But a disadvantage which elite sports can bring with it on a professional level, especially in team sports, is that you become passive”, Mikael Renberg explains.

Elite players in a team sport such as hockey bring with them talent and an enormous drive, but they haven't learned to use this off the ice. Their life is more or less handed to them on a silver platter, so they can dedicate themselves 110 per cent to hockey. He believes that because of this, many hit a void after their hockey career.

“When you are a hockey pro, there's always someone telling you what time to get up, what time you're supposed to be at the rink, when to eat, when you have to be at the airport to check-in, and so on. You never need to use your own initiative or take any responsibility, except on the ice”, says Mikael Renberg.

“I'm sure a lot of people will be irritated by me saying this, but after a hockey career, you have to work with something else for at least another 25 years, and for most, hockey is over quicker than you think.”