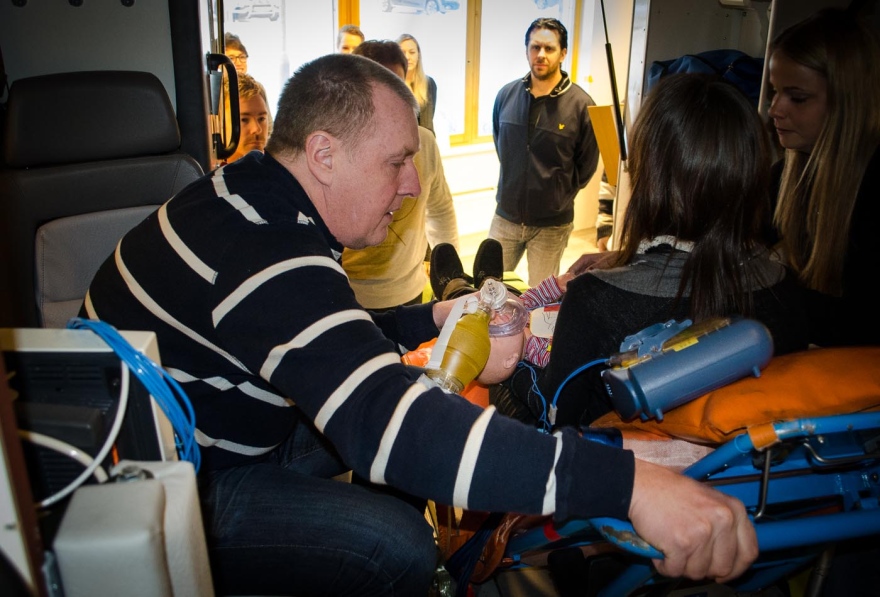 Stefan Holgersson has worked in the ambulance for 28 years. Taking care of babies is unusual, so he appreciated the exercise. The used patient compartment of a real ambulance did the exercise realistic.

For the first time used the "ambulance" as the Department of Health Sciences at the university bought in autumn 2013. It consists of a used sick bay from a real ambulance.
-Great, it's that our work environment looks like, so this is how it should be, says Stefan Holgersson, Gävle, one of the students.
He has worked as an ambulance nurse for 28 years and enjoys the exercise was good because it provides preparation for a situation that is not so common.
-Once that happens something like this it is good to be prepared for when you need to be tightened, he said.
Stefan Holgersson and Sandra Holmgren, Örnsköldsvik, acted ambulance nurses during the exercise, which was conducted in late January.
The condition of the baby (doll) was critical, the cause is unclear. The mother, played by a student, was very anxious, bordering on hysterical.
After some initial steps to stabilize the child's condition was worn it to the ambulance (infirmary) for transport to the hospital.
The whole exercise process took place in front of students and several teachers.
Afterwards discussed Stephen and Sandra's actions.
-Had you been able to ask more questions to parents, asked Christer Kågström, one of the teachers.
-You took my blood pressure, said one of the students.
-That you get feedback for one of these exercises, it is the most important. That's what you learn from, says Stefan Holmgren.
The students who participated in the exercise is the second semester of their distance education that gives 60 credits.
When studies after two semesters are completed with results accepted students have a specialistjuksköterskeexamen.

The baby (doll) is examined by Stefan Holgersson, even though the mother, played by another student, is worried, bordering on hysterical.

Christer Kågström, one of the teachers, go through the exercise together with the students. What could have been done differently?