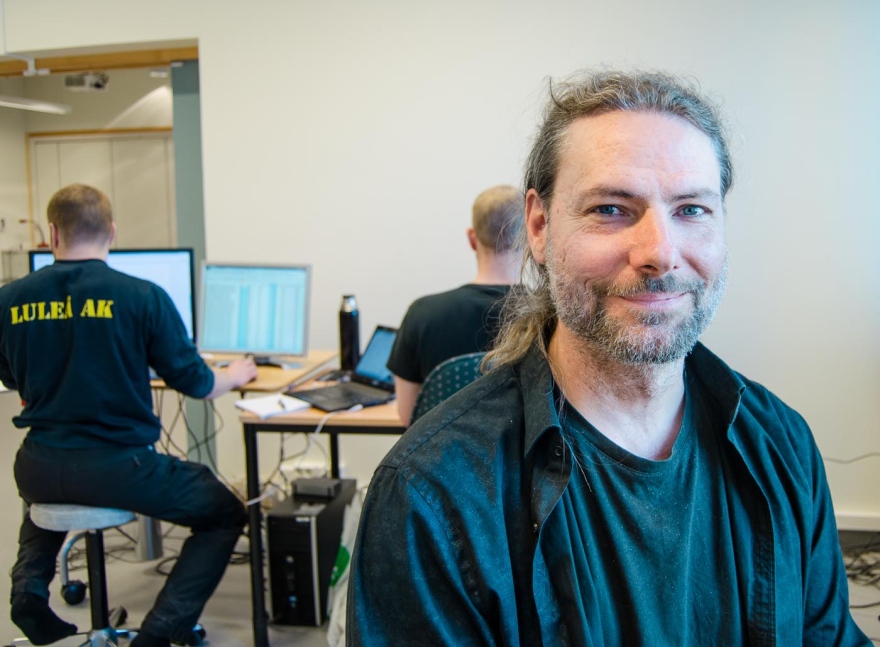 -There;s a lot of interest from various departments at the university to use the lab, says Ulrik Röijezon, physiotherapy researcher and responsible for operating the lab. Behind Ulrik Röijezon physiotherapy students Gustaf Lövbrand and Daniel Fahlstedt is working with analyzes of data collected in the lab during their thesis about the load on weightlifters. View original picture , opens in new tab/window

The eight high-speed cameras in the motionlab is positioned at ceiling registers movements using reflectors placed on the body.

Data from the first study conducted in the laboratory is currently being analysed. It is about the body movements with different grips used by weightlifters and is part of a thesis project at the physiotherapy program.

- A study like this would not have been possible without the motionlab, says Ulrik Röijezon, researcher in physiotherapy and in charge of the lab.

The lab, The Human Health and Performance Lab - Motion Analysis, has recently started to be used. The equipment consists among other things of advanced high-speed cameras and high-tech equipment that can record body movements, forces and muscle activity.

- There is great interest in using the lab in various projects, says Ulrik Röijezon.

Researchers from various institutions within the University has formed a working group (Working Group on Motor Control and Biomechanics) to stimulate interdisciplinary projects where the motion lab can be used.

Projects may involve, for example altered motor control in various disorders and occupational health, e.g. motor control in musicians with musculoskeletal pain disorders, but also machine-human ineraction and sustainable vehicles and machinery.
A project has been started with the aim to create an integrated e-Health system for web-based 3D-motion analysis. Technology from the computer and video gaming world (kinectkameror) may possibly be used.

The idea of the is that physiotherapists, doctors and ergonomists should be able to use the system in the assement/training of patients in his own clinic but also remotely via the internet.

Another project goal is to conduct a feasibility study to examine the possibility of creating a robot that dances ballet as elegant as Vaslav Nijinsky.

The project will build on the use of new technology, so-called pneumatic muscle (PMA).

FACTS: The Human Health and Performance Lab is located on the premises of the D building belonging to the Department of Health Sciences. It was funded with money from a grant of 2.3 million from the Kempe Foundation and the University's lab fund.

The working group for motor control and biomechanics includes representatives of the Departments of Health Sciences (HLV), Systems Engineering (SRT) arts, and communication and learning (KKL).

Read more about the working group