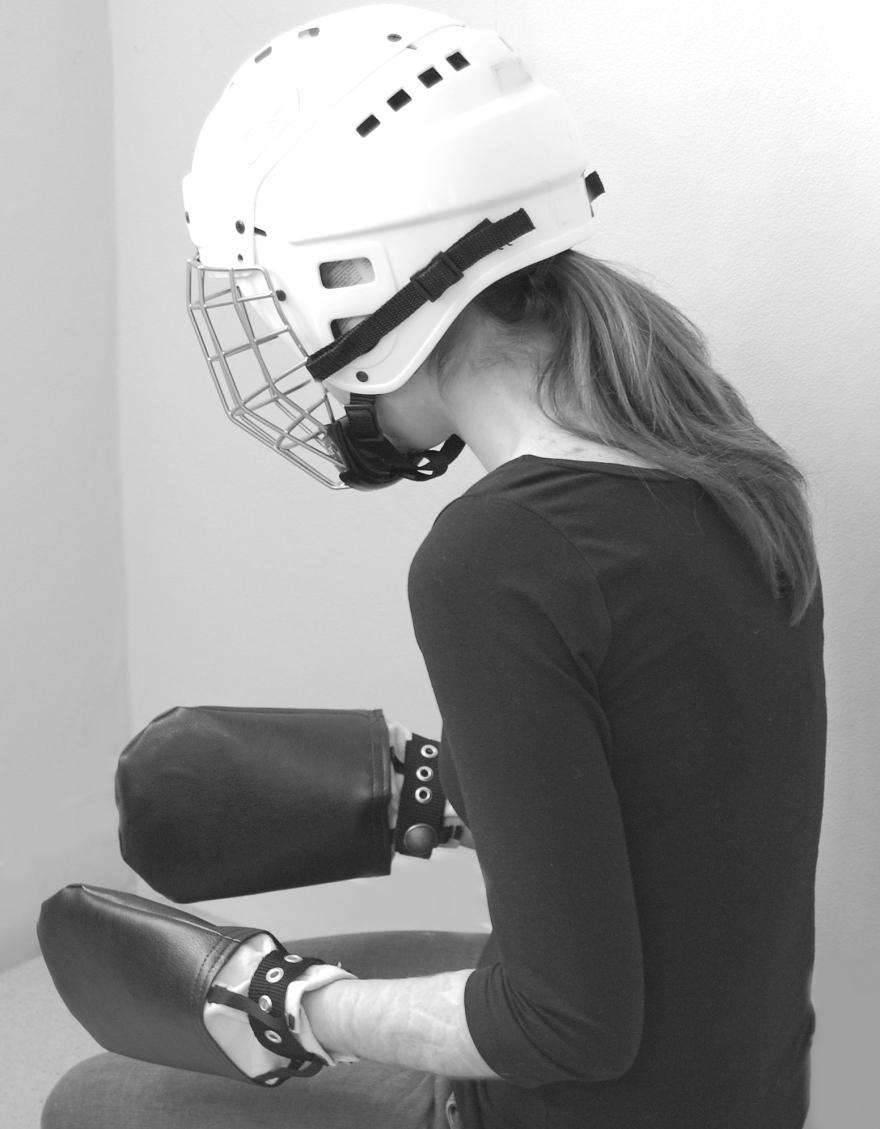 The picture shows a person who against her will is placed in gloves and helmet to be prevented from harming herself. The photo is from Hitachi, S. & Eriksson, T. (2011). End station psychiatric care: compulsory care of women who are not convicted. Stockholm: Nature & Culture. Published with permission of the authors. View original picture , opens in new tab/window

Coercive measures are frequently used, even though new research shows that patients, staff and students agree that there are often other options. The options are really quite easy to implement, but it is not so easy to change old habits. Ignorance, fear of losing power, disciplination and rigid rules contributes to greater use of coercive measures. Git-Marie Ejneborn-Loois studies show that a trustful mutual relationship and the ability to see and understand the needs of the patient, is the sharpest tool to reduce coercive measures in psychiatry care.

The treatment works against its purpose

In her research she has taken part in 19 people’s stories about their experience of having been treated for self-harm behavior in a psychiatric unit. All the studies indicate a high level of consistency between the patients, students and staff descriptions of care as counterproductive and thereby worked against its own purpose. The working methods made the patients felt ignored, misinterpreted and powerless, and at the discharged moment they had fewer opportunities, less hope and less self-esteem than before. Patients describe a desire to have confidence in the staff and a collaboration of the treatment provided on scientific grounds.

– There are dreadful descriptions of the care they received, which show large gaps in the psychiatry care. Before the first care episode the patients felt hope to finally get help, but they lost their confidence more and more after each care episode.

Git-Marie Ejneborn-Looi has also taken part in 14 nursing students' log books to see what approaches and actions they chose from a study task, where they would create a relationship with a selected patient, identify needs, and perform actions that do not involve coercive measures.

It turned out that the students succeeded surprisingly well in creating trusting relationships and mutual cooperation with the patients despite their limited experience.

– For example, they got the patient to come and ask for their injection, instead of as previously be mechanical restraint and forced medicated.

According to the Swedish health care, the health cares mission is to understand and meet the needs of patients, but Git-Marie Ejneborn-Looi believe that patients who self-harm end up in a catch-22 situation. Patients express a need for support and to be able to have confidence in the staff, but the staff distance themselves and believe that this patient should not get the attention they demand.

– In the end, they harm themselves to be able to handle the vulnerable situation. But if they were detected they will be either discharged when they are feeling at their worst, or being mechanical restraint because they violated the rule of no self-harm on the ward. They get no help whatever they do.

Creating a model for nursing development

In her research Git-Marie Ejneborn-Looi concluded that if the staff succeed in creating a mutually trusting relationship with the patient, understand the patients expressed and unspoken signs, as well as do preventive work in collaboration with the patient, there is rarely a need for coercive measures.

– Reflection is the tool that the staffs need to grow as an individual. This requires that careers are supported to develop their reflection skills, have knowledge and get the chance to take responsibility for every situation and thereby build up trust in their own expertise.

Git-Marie Ejneborn-Looi has also worked as a nurse in mental health services. In the future she wants to test and evaluate the approach in a number of psychiatric units. Then it would be possible to compile the results and formulate a model of continuous care developments in psychiatric care.

Patients get their voice heard

The patients study has also qualified for a newly released report from the SBU, the Swedish Council for medical and social assessment, describing the experiences of treatment in the care of people with self-destructive behavior.

– It feels great that the study may contribute to the much needed development of psychiatric care, but also to the persons who gave me their stories get their voices heard in a wider context. It warms my heart.

Nursing as reflective practice. To view and use alternatives to coercion in psychiatry
Read the thesis in Swedish

Read more about our research in Nursing

"There are alternatives to compulsory treatment in psychiatry"
Special Nest