For many years Cecilia Björklund Dahlgren has been interested in the special dance method GAGA and sought cooperation with Batsheva Dance Company, which developed the method. In November, efforts to create a permanent business in Sweden intensified and the Jewish Theatre with Pia Forsgren theater manager and artistic director, as the initiator and organizer of GAGA Sweden.

- We hope to continue to build on this so that we in the future can offer our students exchanges with the Batsheva Dance Company, says Cecilia Björklund Dahlgren. 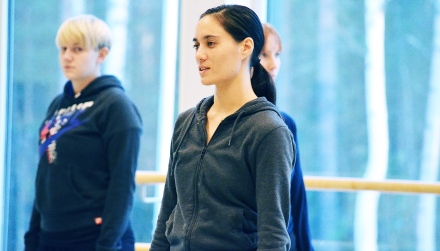 In order to spread interest in GAGA workshops are held for high school students in Stockholm, dance teachers counrtywide and dance teacher students at the LUT in Piteå. The instructor is Rachael Osborne, originally from Australia. She joined the Batsheva Ensemble in 2001 and Batsheva Dance Company 2003. In november she is visiting the students in Piteå.

- It is a great responsibility to teach GAGA to aspiring dance teachers and it reveals how thin the line between student and teacher is. For me it is important to not only teach, but to be constantly in the learning process myself and I feel extra aware of this when I teach future teachers, says Rachael Osborne.

GAGA is about getting to know your own body and to explore and develop your own movement patterns and build speed and explosiveness by the body's own ability.

- It is all about discovering witch habits and bad habits that we have. We try to be aware of them and play with them. A kind of guided improvisation where I as an instructor rather describes the feeling of movement than the movement itself so that students will find new ways to move, says Rachael Osborne. The classes are intensive and takes place behind closed doors without mirrors to allow students to focus on feeling rather than how it looks. A GAGA-lesson may not be photographed or observed by someone not involved.

- I was feeling calm and the feeling went right into the joints and stayed with me over lunch after the first session. When I looked around at my classmates, it was like everyone was moving differently. We were floating in some way, it was awesome, says dance teacher student Liv Trulsson