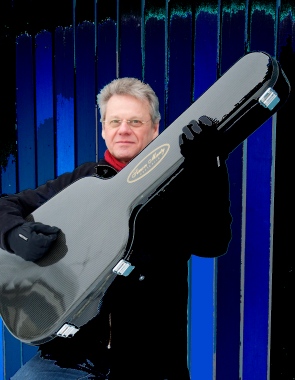 Jan-Olof Eriksson was born in Umeå, Sweden. He graduated from the Gothenburg Conservatory of Music with a masters degree in fine arts and pedagogy. He obtained his soloist diploma in 1972, and made his debut the same year. Since 1974, he directs the guitar program at Department of Music and Media in Piteå/Luleå University of Technology. He was appointed Senior Lecturer in 2000 and Professor in 2006.

He has performed in solo recitals and with chamber ensembles throughout Europé and is regularly invited as a teacher, judge and a lecturer in international guitar and music festivals, including the Guitar Foundation of America festivals in Quebec City 1994, Montreal 2004 and Estonia 2011.

Jan-Olof Eriksson is a prolific arranger and composer for guitar solo, guitar and other instruments, guitar ensembles and guitar orchestra.

He has been published by several publishers including Warner/Chappell Music Scandinavia, VISS Musikförlag, Notposten, Notfabriken, Tuscany Publications, Guitarissimo Publications and Doberman-Yppan. His publications are performed and recorded widely.