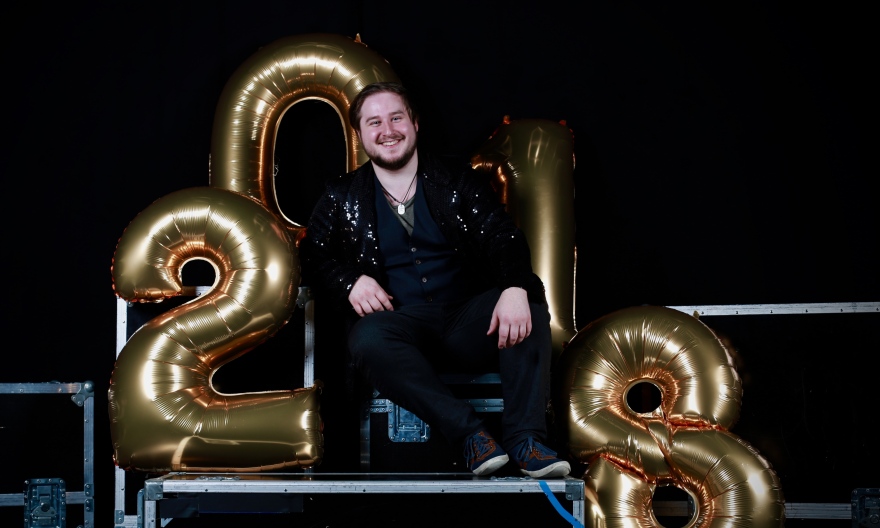 - This year's edition of SMASK will offer a truly magical show with a lot of glitter, magic, and a lot of key changes, says Fredrik Söderlund, music student and SMASK General.

Sveriges Musikakademikers Sång Kåntest, shortened SMASK, is a music competition organized by Sweden's six music colleges since 1991. The competition started as a reaction to the fact that students' contribution to the Melodifestivalen rarely was accepted in the competition. So with the motto "If the melody does not get to the festival, the festival will come to the melody" the humorous and loving parody of the Melodifestivalen was born. Unlike the original, however, SMASK has a live orchestra. With just a few days left for the show, preparations are being made.

- At the moment there is a lot of happening at the same time, but above all it's a short, but feeling very long, wait until we can step into Studio Acusticum to get started with the rigging, says Fredrik Söderlund.
During the production of SMASK, more than 150 students at the School of Music at Luleå University of Technology are participating. Everything is also done outside school hours. However, Fredrik Söderlund confirms that it is worth all hard work when the curtain falls on Friday night.

- The whole school is working together to make it work. One will get to know so many new people in a whole new way and it creates a huge community. It's a long and hard work for all contributors, but when one is about to start the show, everything will feel amazing!

This year's theme is a magical mystery, and as the name suggests, the show is about magic and mystery.

- We wanted to make the audience feel excited but at the same time a wonderful sense of magic in all its forms, ​​says Fredrik Söderlund.

The competition in Piteå will take place Friday, March 16th, in Studio Acusticum. Later in spring, the winner and the second-placed contribution will represent the School of Music in Piteå at RIKS-SMASK in Örebro.