The state of stress affects the rock mass stability and permeability. Therefore, knowledge about the state of stress is of the great importance for the vast majority of rock engineering projects at greater depth.

–  This knowledge is important for several types of applied projects, such as the analysis of the safety of the repository of spent nuclear fuel, geothermal energy, carbon dioxide storage in bedrock and stability calculations for various types of manmade underground structures, says Maria Ask, Professor of Applied Geology at Luleå University of Technology.

–  The technology we use downhole called hydraulic fracturing. With a pair of seal packers we part of the borehole. Then we pump carefully into water under high pressure and measures the pressure when the rock wall cracks or an old crack open. Using a electrical imager then we measure the crack orientation, sais Daniel Ask, professor in exploration geophysics at Luleå University of Technology.

Daniel Ask will work as a project manager in the places where bergspänningsmätnignarna be performed.

The rock stress measurements equipment consists of two main parts, measuring equipment in the borehole and data collection device on the surface. Three versions of the instrumentation in the borehole is being constructed to enable measurements in three different borehole diameters, 122, 96 and 76 mm. The challenge is to design the measuring devices so it fit in the slim boreholes while being robust enough. Above ground, the surface system is installed in a steel container that is mounted on on a 13 meter long trailer. The container also holds ​ three winches which have 3 km long steel tubing and logging wire that connects the borehole equipment with the surface system.

The equipment is being built at the university

Most of the equipment in the borehole built at Luleå University of Central workshop but the project also includes a research collaboration with the University of Strasbourg in France.

–  I have worked here at the central workshop since 1973 and this is the biggest task I have experienced, all categories. There is also a project where all of our skills and experience will be tested and challenged, says research engineer Tommy Nilsson, Luleå University of Technology.

The stress trailer has been developed at LTU in cooperation with, among others, the University of Strasbourg and Geosigma AB. The Swedish Research Council and LTU have funded the project, with in-kind support from Geosigma AB and FracSinus Rock Stress Measurements AB.

The first stress measurement campaign was conducted in the summer of 2018. Testing occurred in a 1.2 km long borehole of Posiva Oy in Olkiluoto, Finland. 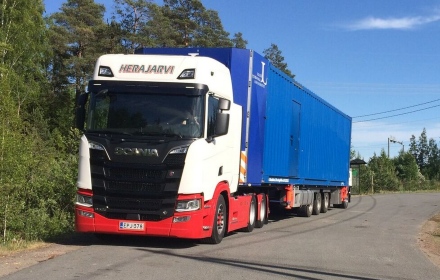