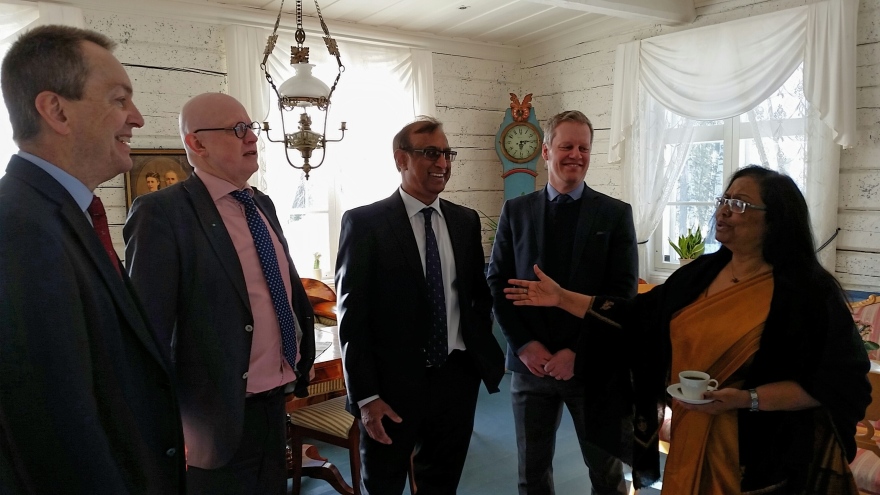 The Ambassador and the members of the faculty discussed the broad possibilities of cooperation between Luleå University of Technology and India in important areas, like;  Railway maintenance including safety and sustainability and in mining technology; She was given a detailed presentation on Luleå University of Technology by the Pro-VC followed by presentations in the field of Operation and Maintenance Engineering, Bridge technology and Mining by the concerned faculty members. After further fruitful discussions, several areas of common interest were identified for follow-up including exploration of a possible joint Centre of Excellence in Railway Maintenance Technology and cooperation in upgradation of bridges and training in the field of mining as well as other areas where Luleå University of Technology had expertise. The Ambassador was then taken to visit various laboratories where path breaking research are conducted; The labs visited are; tribology lab; e-Maintenance lab and structural engineering lab.

The Ambassador also addressed to about forty students and faculty members of Luleå University of Technology where she spoke on "India -Sweden relations, Past Present and the Future". She described the enormous potential for collaboration that exists between the two countries including through the "Make in India" programme launched by the Prime Minister last September where a big focus had been put on infrastructure creation and up gradation. Her talk was well received and generated a very lively interaction. Later in the day, the Ambassador interacted with members of the Indian community of Luleå University of Technology.

Kumar, Uday - Professor and Head of Subject, Head of Division