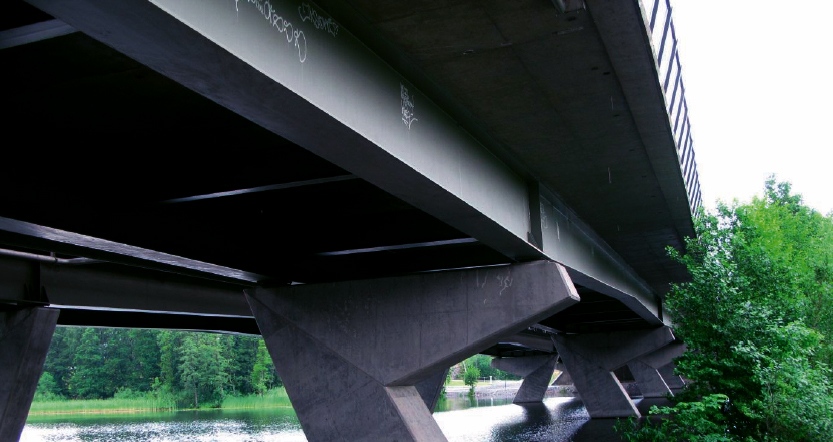 In the summer of 2006, several cracks were discovered in the bridge over Vårby bay.

In the summer of 2006, several cracks were discovered in the bridge over Vårby bay. near Stockholm. All the cracks appeared to have occurred in the welds connecting the vertical main beams over the flanges. On behalf of the Swedish Transport Administration to have an investigation conducted with the aim to elucidate the cause of the fractures formation.

Ramböll´s Bridge Construction Unit in Luleå focuses among other things on technology in the construction of bridges. PhD students Robert Hällmark and Mattias Nilsson has over three years combined studies with their regular work brokonstruktörer.

- The arrangement has worked very well. My Professor Peter Collin, who also works with bridge construction here at Ramboll has supported me in the research.

Mattias Nilsson dissertation Secondary strain in web stiffeners in steel and composite bridges focuses on the fatigue of the steel bridges, namely deterioration of the material due to cyclic loading which can lead to propagating cracks. He has particularly focused on a specific type of fatigue among other things has given rise to a number of cracks on the bridge over Vårby bay in Stockholm. In his work, he has tried to clarify why the cracks have occurred, and how to avoid similar accidents in the future bridges.

Robert has written dissertation Prefabricated composite bridges - a study of dry deck joints. He has studied this possibility to use prefabricated interaction bridges, to build bridges with technology based on finished concrete and steel elements, to a greater extent than before. Robert has, among other things, examined the technique is applicable to multi-span bridges to drastically shorten the time for bridge construction.

- The future of technology is in our hands, the research we produce today will help us get even further in the future. The Ramboll secures expertise in this way is something we should encourage and be proud of, said Peter Collin, Professor of composite structures.

The work was funded by SBUF, the Coal and Steel Union, the Swedish Transport Administration and Ramböll, and has taken off in international workshops organized by Ramböll.

Professor Ian May at Heriot-Watt University in Edinburgh, says the two treatises:

There is a Continual requirement for bridge engineers to find more efficient means of construction. One of the Recent innovation has been to use precast concrete units for the deck placed on steel beams with Which They act compositely. In order to have confidence Ice Such systems They need to be Proved and Robert Hällmark, under the supervision of Peter Collin, has done just this. In his excellent thesis he describes a design method in line with the Euro-Codes together with experimental numerical and theoretical framework to support it.

Fortunately, the occurrence of fatigue failure in welded steel bridges ice Relatively rare. However, When it does occur then it stay connected detailed analysis to understand why it is occurring in order to design a Suitable repair. In his thesis Mattias Nilsson has Investigated the behavior of a bridge in Which fatigue cracking has occurred. In order to fully understand the mechanisms of the crack growth Various effects have had to be Considered. By looking at each of These effects a real understanding of the behavior has been Achieved. Whilst the strategy for repair has not yet been Identified the excellent investigative work of Mattias will assist in Determining what it should be.

Secondary strain in web stiffeners in steel and composite bridges