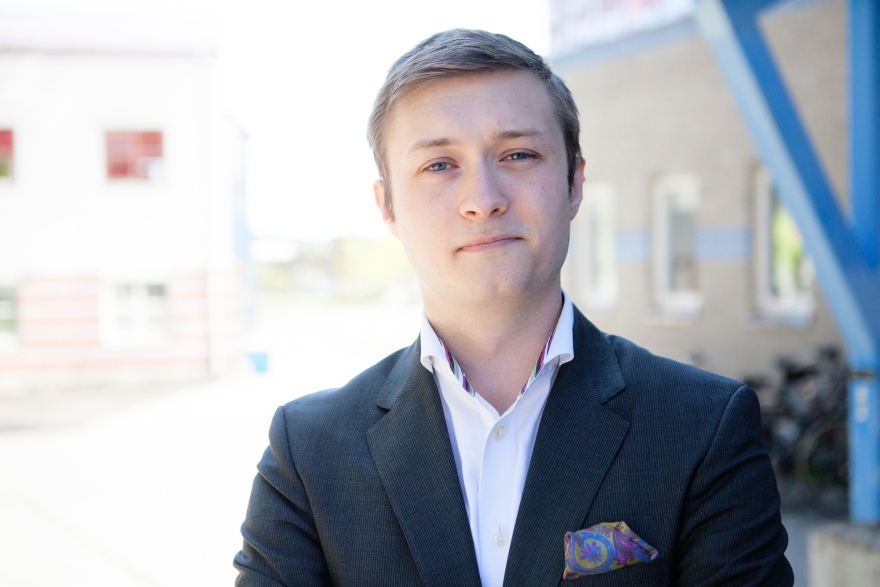 View original picture , opens in new tab/window
Do you have an idea? Contact any of LTU Business coaches

- If I had had the opportunity now, I would have finished my studies and done something else. I have roughly worked 5000 hours and just as many remains before we even have built something, says Johan Levol laughing. Joking aside; I love what I do and you can not be in this business half-heartedly. It's 'All-in' or nothing.

It was in the autumn of 2013 that Johan sat and had coffee with two friends complaining about the lack of student apartments.

- We thought it was bad that hundreds of students didn't have somewhere to stay. We sat and thought that it should not be that difficult to solve. Then  one day a student house burnt down.

That became the start of a several year long journey for Johan Levol and his friends.

- Someone had to fix the problem so that students had somewhere to stay. We began reading and call around to other companies and ask what to do and what it costs, etc., we talked with everything from banks to construction companies and property owners up until we started getting proper picture of the situation.

The team consisted of three people made a idea summary and wrote down a preliminary plan for what to do.

- It was optimistic I'll be honest and say. We started by contacting local politicians; it's they who decide. We called Karl Petersen and told them what we wanted to do and he asked us to come over and tell you more. We pitched our idea and he sent us to the city officials.

All the meetings went well but the students needed land to build on, and the time went. Karl Petersen resigned as mayor and the team had to start over.

- We sneaked into a gala event at the University where we knew Niklas Nordström and Yvonne Stålnacke would be and mingled. We took hold of them and held an elevator pitch that led to a real meeting a little later.

It ended with the team came in contact with a property owner.

- They thought the idea was exciting as we continued to develop it. It was at an earlier stage of the project, at that time we had no name or company. We were three guys with an idea that we thought wholeheartedly were good. I think we called ourselves 'Project Better Living'.

The idea was simple and consisted of two fundamental concepts, people build to little and usually the built environment riddled with bad planning. It's okay when it comes to finishes and floor plan. But on the outside, it can be monotonous and inexpensive, and the houses are down a bit anyway. We draw a house, and copy and paste it 10-20 times a bit random. It is poor at planning how the built environment should look like. It is important to understand that a person living alone in his apartment, they live in their house, their neighborhood, their neighborhood, their city, says Johan Levol and continues.

- A certain houses can all agree on is ugly. But what is beautiful, no one can agree on. Everyone thinks different and the client side, we often hear voices saying that beauty is subjective. I argue that subjectivity exists to some extent but it is actually possible to measure the attractiveness of including the value of condominiums. Planning to the built environment better so you can charge more without for that matter make it more expensive to produce.

- It's was good to find help with networks and Johan Bergström helped with coaching on pitching when we took the course in idea development. It has helped me develop as a contractor pretty much. We have talked many times over the years and Johan has prepped me since day one, says Johan Levol.

Slowly the team gre from three to five people, and in conjunction with that the municipality launched a public contract for a quality and design contracting and that is how the team came in contact with the MAF.

- We met with the CEO and presented our idea. We decided to win the competition together. We came in last place but we did not give up.

Johan Levol and Mats Jakobsson, CEO of MAF got along and worked well together.

- The politicians liked our idea, but we needed a partner for the realization of the project. So we said that to MAF, you said earlier that our idea is spot on, let's do something. We became partners between us and MAF Arkitektkontor.

During the second half of 2015, they formed the real estate company MAF Fastigheter. Today, the focus is on developing a ground area adjacent to Gultzaüudden.

- It can be finished around 2020 if you are optimistic. It is five to eight years to go before we see some houses. The area will be developed in an innovative way which gives citizens the opportunity to influence the final outcome. It will be done by several citizen dialogues in autumn, 2016 and it is looking further ahead, we have several exciting projects underway in Luleå, hopefully we end up in a position where we can present the next project relatively soon, says Johan Levol.