A modern high-speed camera system financed by the Kempe Foundations has been purchased.  The numbers of pixels are 1280x1024 and 2000/s full size images can be recorded.

The figure shows a setup for filming the stick-slip motion of a violin string. 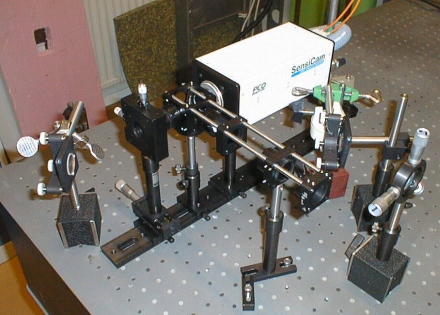 CCD-camera and optics for pulsed TV-holography.

The most used CCD-camera is a PCO Sensicam double shutter with a detector containing 1024 x 1280 pixels of size 6.7 x 6.7 µm. The figure shows a photo of the camera and optics for pulsed TV holography. The detector is Peltier-cooled to -12°C and the dynamic range is 12 bits, which enables the camera to be used at quite low light levels. The camera is controlled from a computer via a fibre optic cable, which is insensitive to electromagnetic transients. The camera is externally triggered and two images can be captured with minimum 200 ns time separation. The exposure time for the first image is controlled by the user via the trigger signal duration and the second is set by the read out time for the first (125 ms). If the laboratory is kept dark however, the exposure of the CCD detector will be due to the laser pulses only. Four double images per second can be recorded at full resolution. The camera can be synchronised to a pulsed laser and properly triggered by a Stanford digital delay generator. We have three PCO cameras. 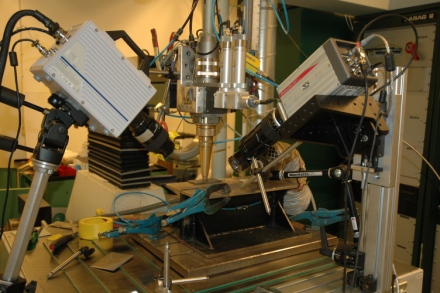 This sophisticated camera system is capable of recording 5400 frames/s at full resolution (1024X1024 pixels). By reducing the active number of pixels the framing rate can be increased up to maximum 675000 frames/s. 16 GByte of 12 bit images can be stored in one recording. After a recording, the images are transferred to a computer via a Gigabit Ethernet connection. The shortest exposure time is 370 ns, which freezes the motion even for very fast events.   The figure shows both the Photron (left) and the Redlake (right) camera systems, here used for filming laser welding. This equipment is financed by the Kempe Foundations.