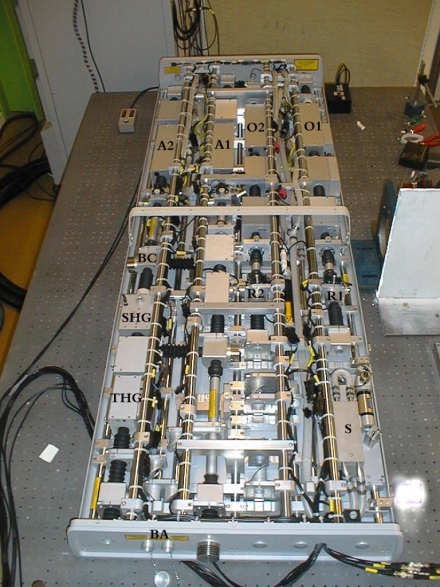 The timing between the pulse trains can be set from zero and up which makes it possible to study transient events in a large range of times. The system is mostly used for pulsed TV holography and PIV.

Twin model Spectron SL804T Q-switched Nd:YAG lasers, each laser comprising a single oscillator with a single power amplifier in series (O1, O2 and A1, A2 in Fig. 2). Each oscillator is configured with a telescopic resonator with intracavity mode-controlling aperture. This gives rise to a true TEMoo spatial profile for spatial uniformity and coherence. Both oscillators can be either single pulsed or double pulsed. Both lasers are mounted in the same laser head on an invar rail chassis to ensure constant alignment between the two beams.

The 1064nm fundamental output from each laser is normally combined (in the beam combining cube (BC)), then frequency doubled to 532nm (in the second harmonic generator (SHG)). Alternatively, each 1064nm beam can first be frequency doubled and then the two green beams are combined. This approach allows flexible access to 532nm output beams with either the same or orthogonal polarisation, which in turn allows us to code each beam spatially. As well as a green output at 532nm, the laser can also be frequency tripled to 355nm (in the third harmonic generator (THG)).

Maximum 150 mJ/pulse at 10 Hz for the green and about 25 mJ/pulse for the UV. The energy is stable from pulse to pulse and can be controlled by changing the amplifier voltage and the Q-switch sync relative to the flash lamp sync.

The pulse duration is about 13 ns. The two lasers are optimised at 10 Hz each but can be operated between 5 Hz and 25 Hz. The time separation between the two lasers can be set from zero to any time. Each laser can be double pulsed with time separations ranging from 40 µs to 200 µs. Single shot operation is obtained using beam dump shutters. For reliable seeding, it is necessary that the oscillators are run repetitively. Stable single shot operation is not possible. Instead, fast solenoid-activated beam dump shutters allow access to a single, stable, single-frequency pulse. By connecting a divider unit to the shutters, the repetition frequency of the emitted pulses can be divided by 2, 4, 6 or 8. This enables recordings of repetitive double pulses at different rates.

For precise adjustment the lasers can be run in long pulse mode (fixed Q) without Q-switching the oscillators. These pulses are non-hazardous for the eye and follow exactly the same path as the Q-switched pulses.