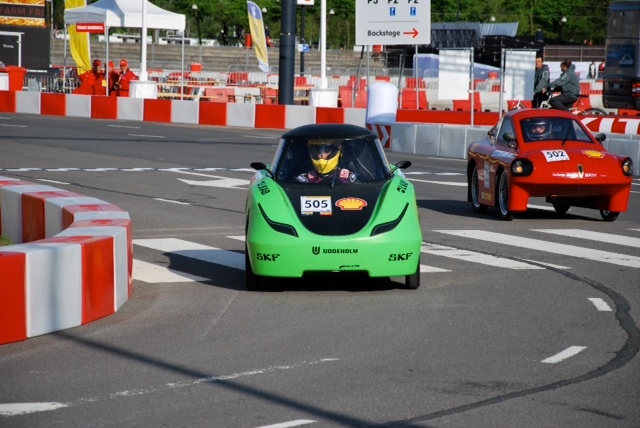 Jonas Lindberg driving with a steady hand during one of the heats in the Shell Eco Marathon. 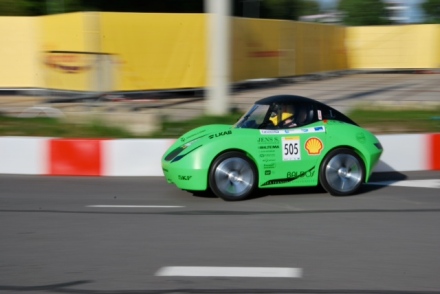 - What have we done with our little green car, not bad we think. It was simply a crazy good end to the week, says Jonas Lindberg who were drivers of Baldo III during the weekend's race in Rotterdam.

After an introduction on Friday with rain, wind and faulty suspension could M.Sc. students in Mechanical Engineering from Luleå University of constantly improving their performance. Team Baldo as they are called has continuously made adjustments, including changed wheel bearings and transmission and fine-tuned the injection. It paid off for the fifth race on Sunday with ethanol in the tank could reach up to nearly 288 km on a liter of gasoline equivalent. It is about 6.5 mil longer than last year's top results for the Baldos II. And to top it all, Team Baldo bring a second dent home for the best description of wear, lubrication and friction (tribology) in his car. It was namely, that one team, receive "Shell Helix Tribology Award."

The competition this year was held in Dutch Rotterdam with student teams from universities in Europe. 224 teams from 24 countries are competing with self-designed cars in the European part of Shell EcoMarathon, with the challenge to drive as far as possible the equivalent of a gallon of gasoline. The race is run in two different classes, the Urban Concept and Prototype, the first case of LTU students car Baldo III.

Swedish competitors in that class is team from KTH and Chalmers and all three, including Baldo III run on different fuels. For KTH car ELBA is the electricity that apply and converted from kWh to Kilometers KTH students drove 1500 km / l for petrol over Chalmers 112 km / l and for Baldo III 288 km / L.