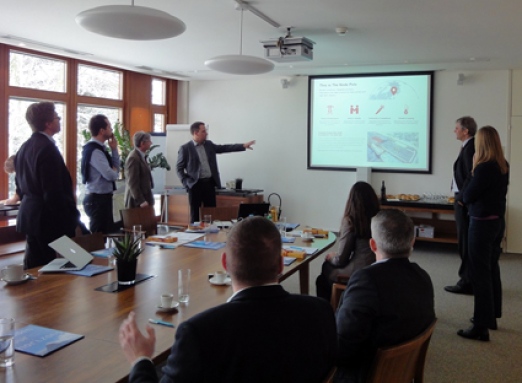 The first visit took place at ETH Zurich, a technical university of the same size as LTU, but who commercialize their research results to a much higher degree than LTU, both in terms of licenses, patents and spin-offs.

- The main difference is that ETH have 75 percent base funding from the state to research and teaching, which among other things means that there is considerable scope for independent research. ETH also expresses that the business rests on three pillars: research, education and commercialization, and in the employment contract commits employees to commercialize research. Existing sideline is allowed for all researchers to add up to ten percent of their time in a spin-off company, says Lena Goldkuhl, commercialization ambassador.

CERN
Next visit took place at CERN, which can best be described as a European collaborative center for human development. Pride among the employees of the discovery of the Higgs particle could not pass.
- CERN's starting point was that the utilization is worth as much as commercialization, and they had divided the activities of technology transfer (patentable innovations) and knowledge transfer. Their way of working with "matchmaking" activities, where an subject invites expert companies and researchers to listen to the business needs of research and development, seemed very interesting, says Lars Hallberg, commercialization ambassador.

Geneva University
Geneva's University was founded in 1559 and is in place 69 on the Shanghai ranking of the world's best universities. The Commercialization Ambassadors (Kam) met the University's commercialization unit Unitec, which over the last ten years has handled 350 so-called Invention disclosures and 150 licenses.

- The spin-off weekend annually arranged for students was really interesting. Students begin to brainstorm ideas. Afterwards they form teams around the ideas that are considered the best, and begin working with them over the weekend. Students work out business plans with the support of Unitecs staff, this has led to several new start-ups. Even the networking events they organize, where students present their research for companies and venture capitalists, was really interesting, says Ola Dagbro, commercialization ambassador.

University of Lausanne was founded in 1537 and has approximately 13,000 students and around 2,300 researchers.

- During the visit raised several questions about how property rights to licensing shall / should be handled, i.e. what strategy we should have at the university to make the best possible public benefit. It was interesting to see how the priority to quickly take out patents on innovations, which allowed the publications are not, delayed, says Jan-Erik Westerlund, commercialization ambassador.

CTI can be likened to Swedish Vinnova. Research grants can be applied to all year round by universities in four areas (no directional call in addition to the areas occurs), and the applications received are evaluated once a month. CTI also works more towards companies to start and develop.

- They work very targeted with coaching for young people to start businesses. In addition, they work with external coaches (entrepreneurs, business angels, etc.) to new companies to get a better position to operate successfully. The survival rate among the companies that received so-called CTI certification (ie, gone through all the coaching steps) are impressive 90 percent. This initiative has been going on for over 10 years, there is continuity in the venture, said Dennis Pettersson, commercialization ambassador.

- Some of what we have seen in Switzerland, we turn now to Startup Luleå, where we work to inspire and motivate innovation and entrepreneurship among researchers and students. Startup catalog is arranged by the LTU, Centek, ABI and Internet Bay, and is open to anyone with an entrepreneurial interest. The goal is to meet every six weeks to exchange ideas and experience, says Peter Parnes, commercialization ambassador.