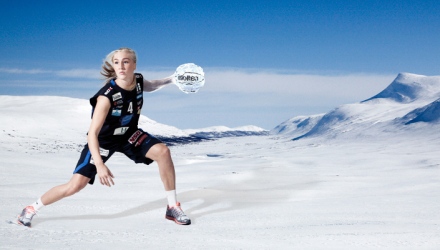 Frida Aili, player in Northland Basket participating in this year's Championship in Yukigassen. Photo Per Pettersson.

- We looked at the SM in snowball fight last year and thought it looked funny, said Tim Kearney, player in the LF Basketball.

The LF Basketplayers have therefore announced a team, but because it requires at least three girls they have called for a trio from the female team Northland Basket. Captain of the joint team will be former top player Håkan Larsson. Basketball players believe they can have an advantage with their ball skills even if snowballs are slightly smaller than basketballs. The team will consist of; Stina Nilsson, Frida Aili, Traci Edwards, Tim Kearney, Emil Salon, Keith Ramsey, Jonathan Larsson, Emanuel Lindbäck and Martin Pahlmblad.

This year's Championships in Yukigassen becomes a sparkling event. During the competition, which this year takes place on the university campus during the evening, the matches will be accompanied with a lot of pyrotechnics.

- We are doing a joint event with the Student Championship in fireworks, says Karin Jonsson, Project Manager.

Shuttle Bus will commute between Luleå city center and the university with departures every hour.

- So we hope that many come here to watch and play, said Jonsson.

The two previous SM in Yukigassen have been won by teams from Luleå University of Technology. Last winter  Team Backyard Porsön was the winner. The inauguration of the races take place at 19:00 and the finals are determined at 23:00. Eateries and barbecue will be available. Likewise, sales of hot dogs, hamburgers, etc. ..

The theme of the SM is snow, ice and fire. Until 19 February, teams can sign up.

* Yukigassen is a Japanese team sport in the old fashioned snowball fight.
* The sport was established by residents of the small Japanese community Sobetsu 1988th
* The teams is mixed and consists of ten players. There are at least three women and three men on the team.
* Thousands of teams signing up to the Japanese championships every year.
* The sport has spread to Norway (Vardö), Finland (Kemijärvi), Russia (Murmansk), Australia (Mt Buller), Canada (British Columbia) and Sweden (Luleå).

The first Swedish championship was settled in 2010 since the sport was introduced in Sweden by students at Luleå University of Technology.