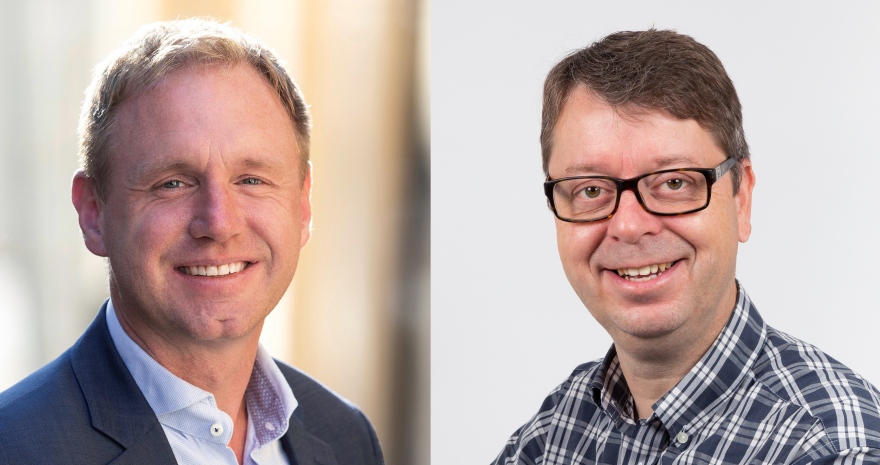 – It is honorable and positive in many ways. It gives me a new platform for increased collaboration between academia and the forest industry in northern Sweden. My philosophy is that it is not only possible to influence the future, but to actually be involved in inventing it. I very much believe that there must be active people inside and outside the universities who see the benefit of collaboration in order to get the application of the research into practice, says Pär Lärkeryd.

Thomas Öström is CEO and one of the founders of the clean tech company Climeon AB, which manufactures electricity from low-temperature waste heat from industry and from geothermal heat from the earth's core.
– It is really, really fun with this award, especially given how incredibly much effort we have put into developing this technology and because I value the academic world highly. I am a deep believer in the importance of the academia in driving development in society, even in direct connection with entrepreneurship, says Thomas Öström.

Every year, Luleå University of Technology appoints honorary doctors as part of the quest for openness and contacts outside the traditional research community.

As CEO of Norra Timber, Pär Lärkeryd has had close contact with the university's research group in wood science and engineering in developing what is called the world's most modern saw line, at Norra's sawmill in Sävar in Västerbotten. Thanks to a state-of-the-art computer tomography (CT), it is possible to scan logs at a speed of 180 meters per hour. Thanks to the technology, every log is utilized optimally.

Both on his current assignment and as former CEO of the engineering company Indexator, Pär Lärkeryd has worked purposefully with gender mainstreaming. Indexator has received the Industry Equality Award and Norra Skogsägarna the Swedish Equality Prize, and Pär Lärkeryd has been hired as an expert in, among other things, the national Equality investigation.

Climeon's CEO Thomas Öström wants to fight climate change by building one of the world's largest heat power companies. With advanced thermal power technology, which produces electricity from low-temperature waste heat from industry and from geothermal heat from the earth's core, the company attracts the world's leading financiers in cutting-edge renewable energy. Climeon's thermal power technology for utilizing waste heat has been installed on Viking Line and Virgin Voyage vessels as well as on SSAB.

When Bill Gates', Jeff Bezos' and Mark Zuckerberg's Breakthrough Energy Ventures fund chose to invest $12.5 million in Climeon's financing company Baseload Capital, Climeon could aim for the goal – to become a global leader in renewable energy. The company is now making great strides in Iceland and Japan, which are the most interesting geothermal geothermal markets in the world.