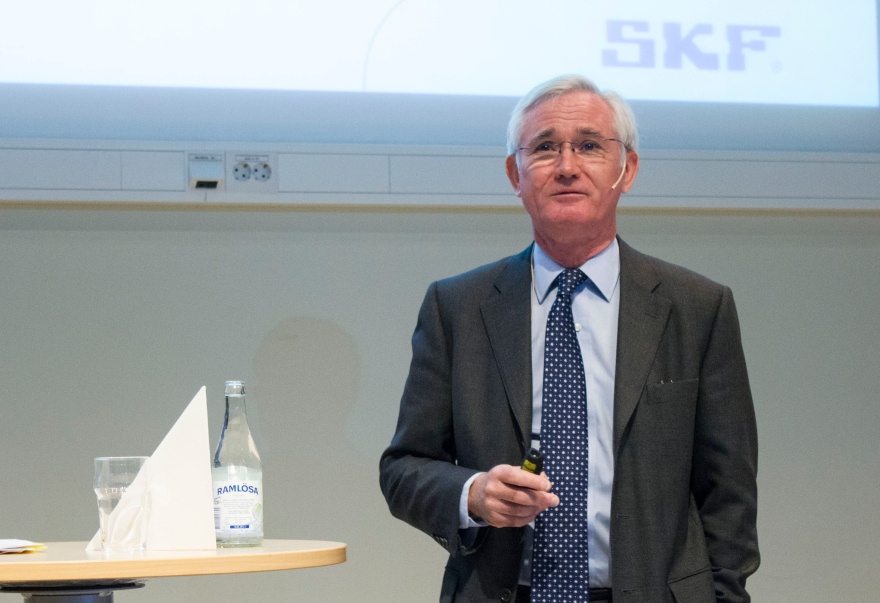 – In the 80's it was thought that the oil would run out in 25 years, which proved incorrect. When an IT-manager presented the idea of World Wide Web in the same decade, we did not believe in it. So I've had blind faith in some things and underestimated others. The further you have to predict, the harder it is. When the bearings were invented in 1907, it was something exceptional. Today we still manufacture them, said Allan Begg.

He is one of the brains behind SKF's exclusive focus on University Technology Centres (UTC), one of five in the world are at Luleå University of Technology.

Alan Begg said it was a great honor for him to be awarded an honorary doctorate at Luleå University of Technology and he was happy to stand before an audience and get to talk about his profession a little more light-hearted than he ususally do. He has an important position within SKF with the future in focus.

What the SKF is now investing in for the future, is about the next generation of advanced condition monitoring which is developing tomorrow's technology for monitoring equipment with smart bearings and there the SKF - LTU University Technology Center comes in. It's all about bearings beeing be able to tell when they are in need of service, and even repair themselves, which would provide significant savings to the industry. Bearings and system goes from being passive to being active and independent.

– We want to get an early warning of problems, so that when something is going wrong in a ball bearing we can stop and fix it, before it becomes a serious error. You sort of get a postcard every five minutes from the bearing, which tell you about how it feels, said Allan Begg.

A smart bearing can be described as a bearing-unit with built-in sensors for condition monitoring technology to self generate the electrical energy required to operate the sensors and equipment to wirelessly transfer data to other storage and networks. Rotating components are everywhere and one single faulty bearings can potentially cause downtime in a factory or, for example, a train or wind turbine stops.

– A bearing can be said to be the heart of a rotary machine, but in the future it will not only be the heart, it will be the brain as well, said Allan Begg.