Luleå University of Technology has received 76 new Doctors in the past year. 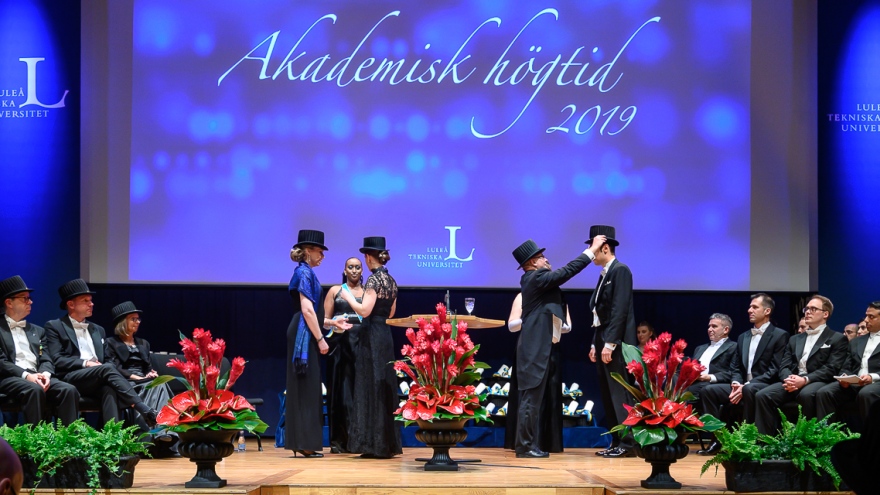 Vice-Chancellor Birgitta Bergvall-Kåreborn giving her speech at the Academic Ceremony. 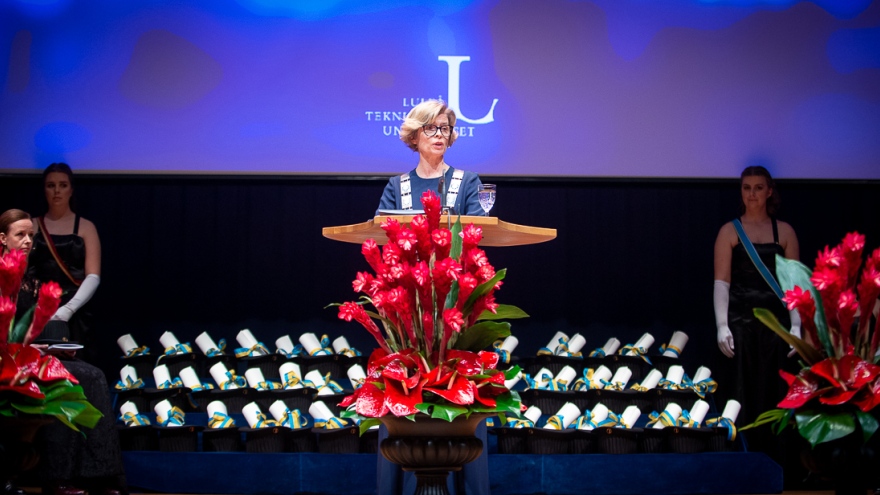 The School of Music's chamber choir. 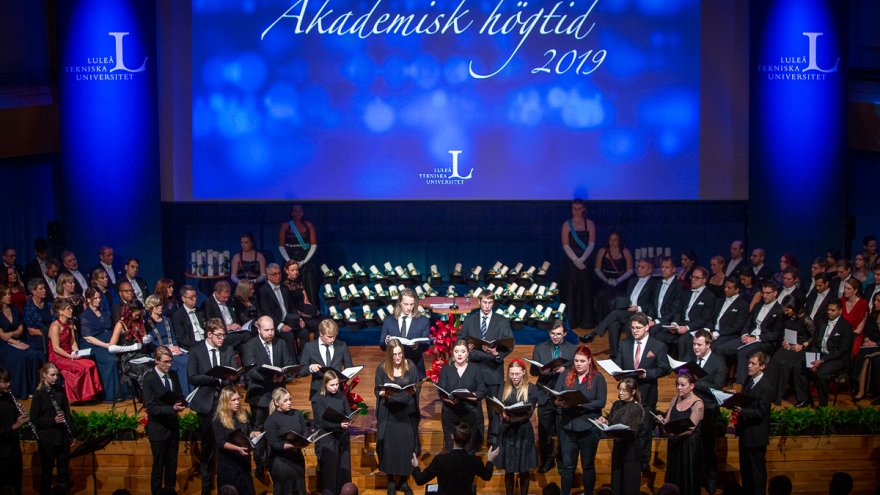 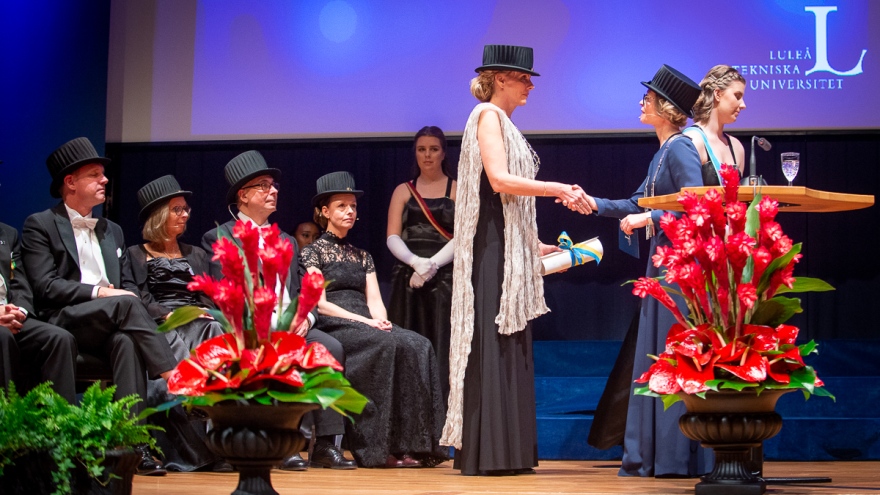 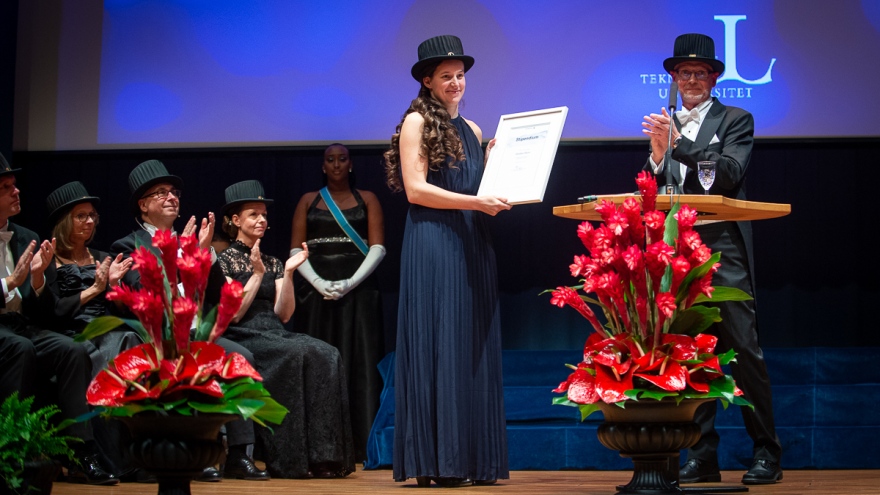 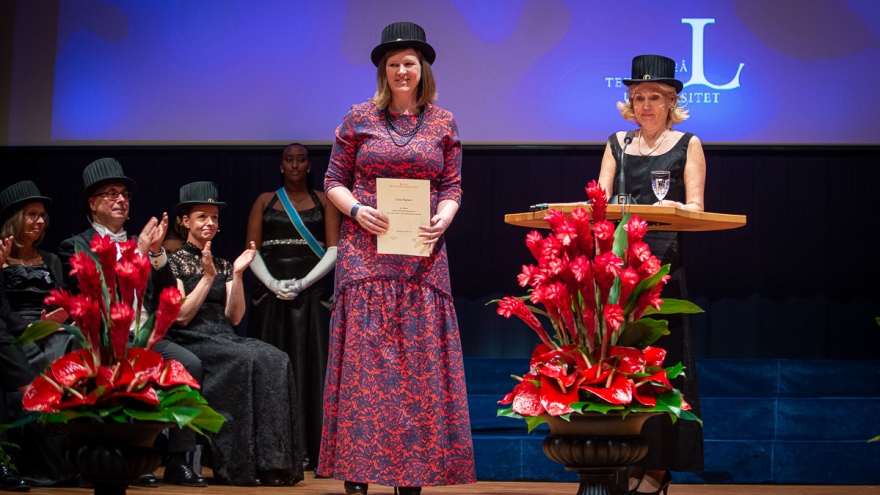 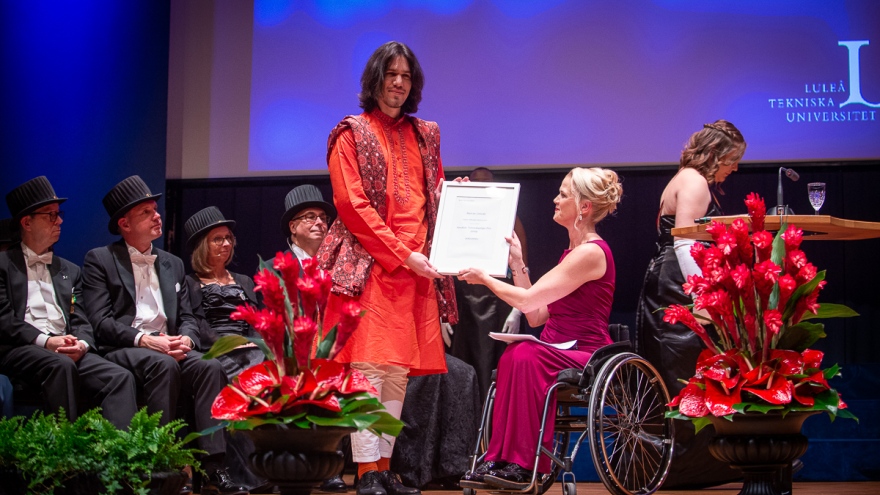 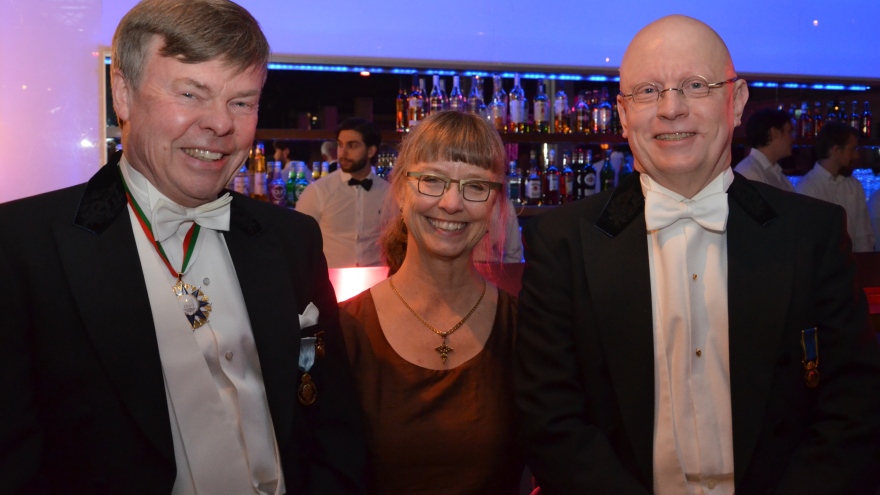 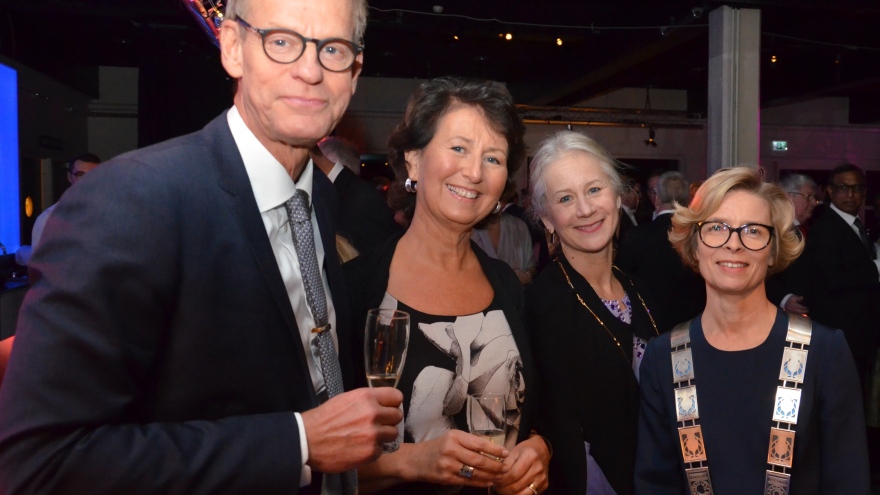 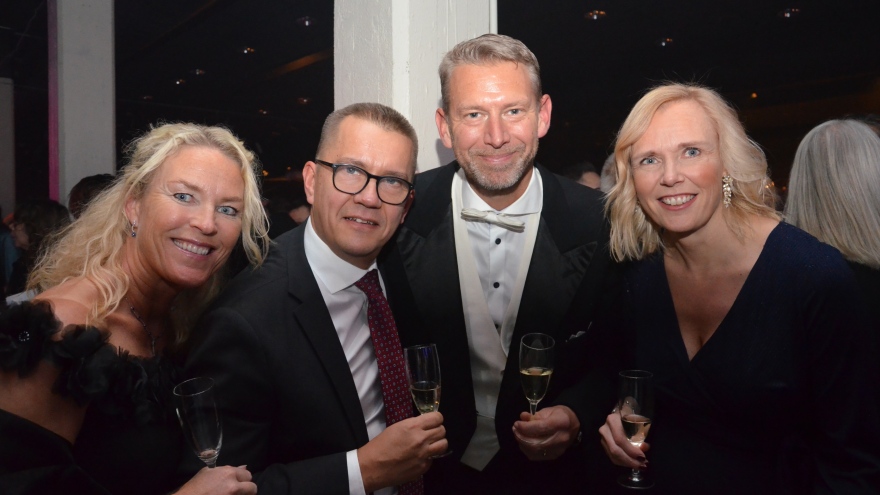 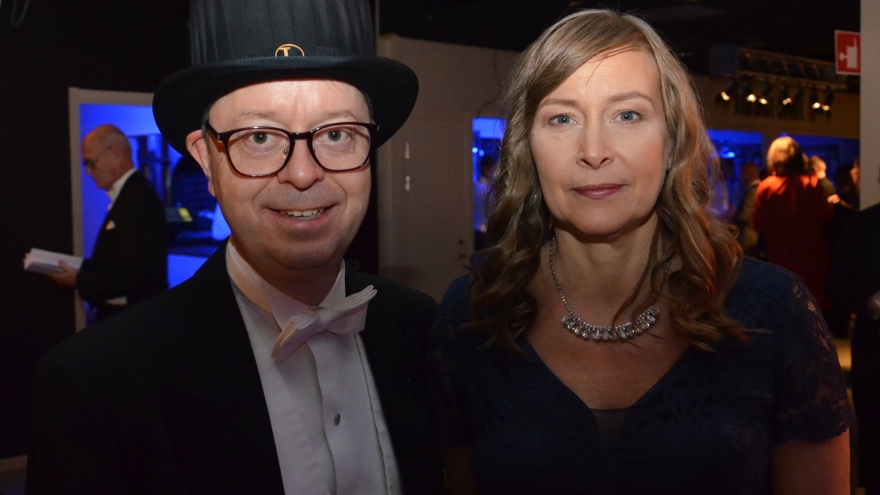 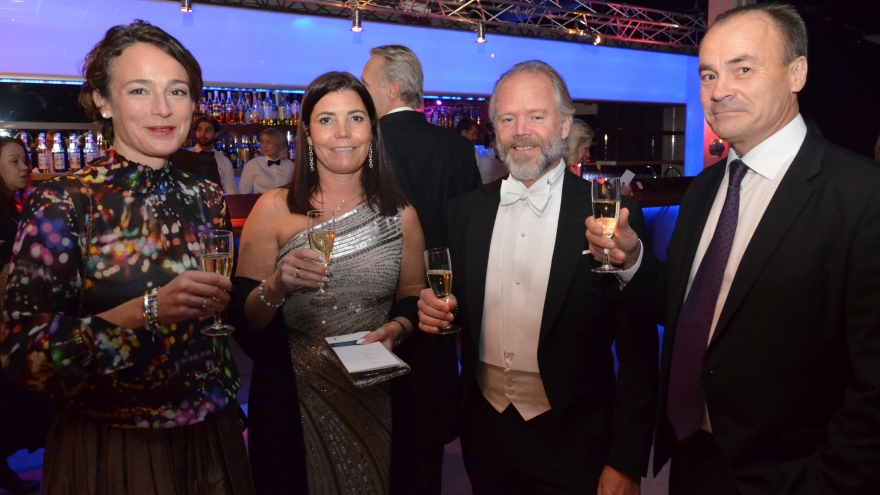 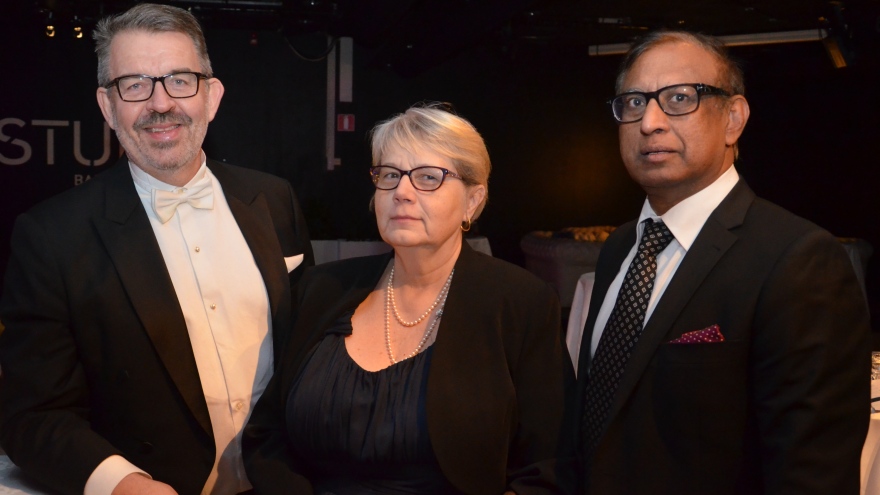 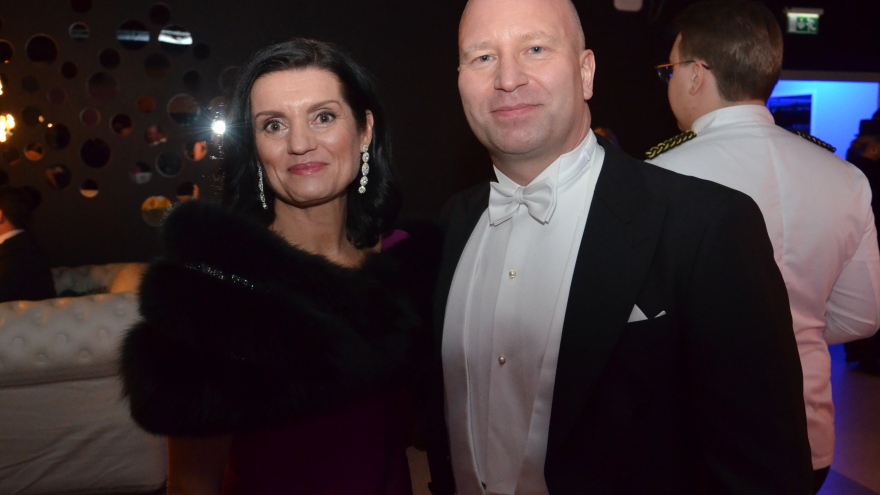 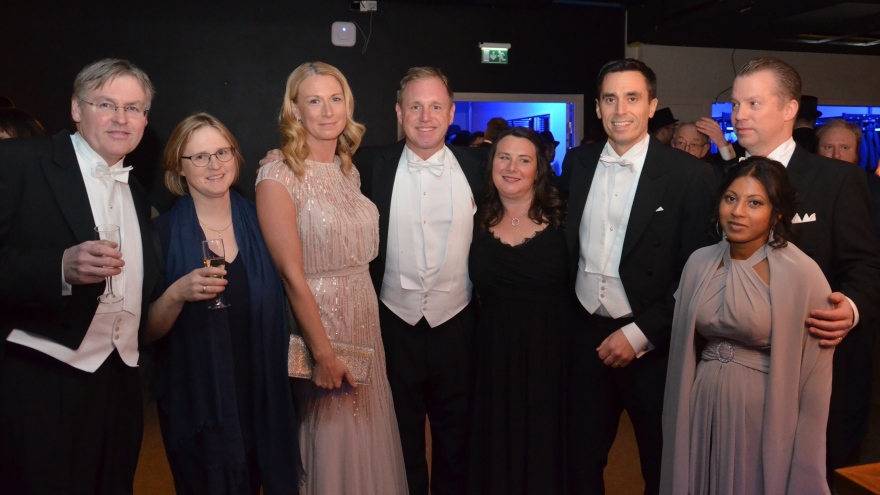 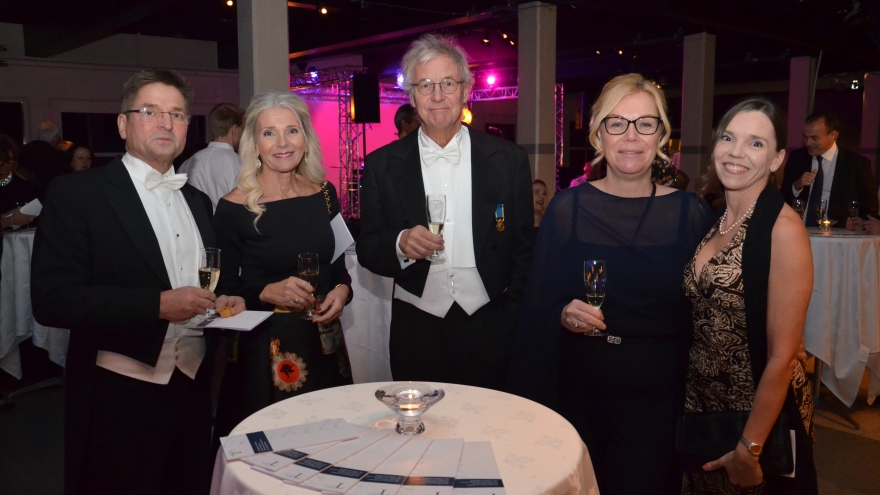 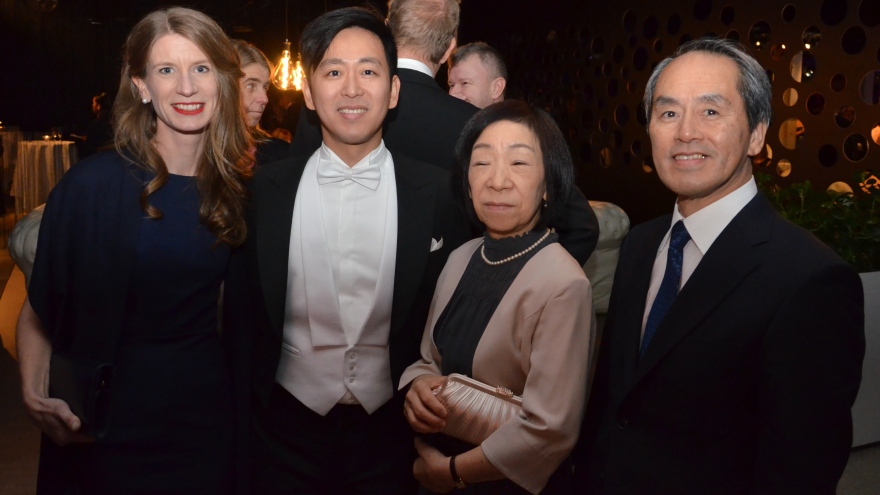 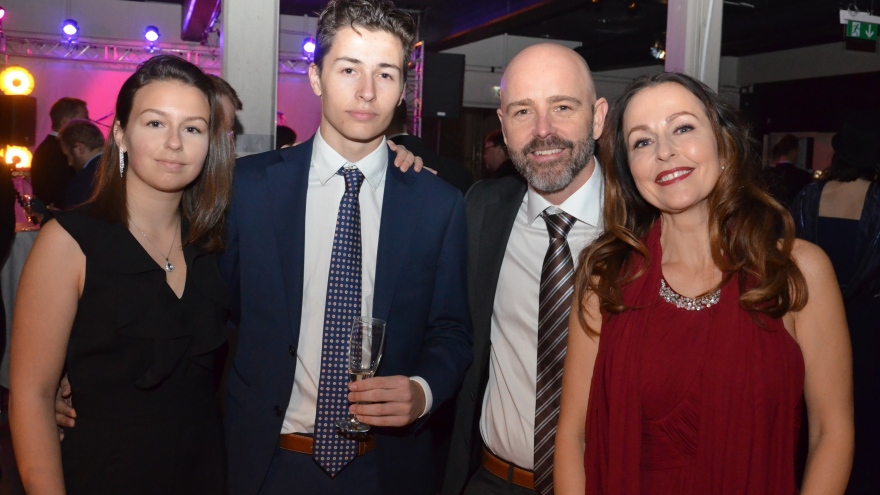 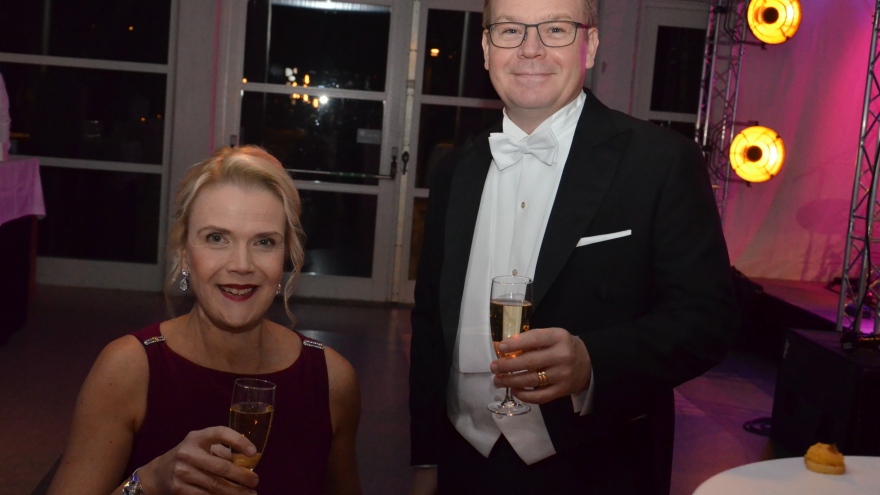 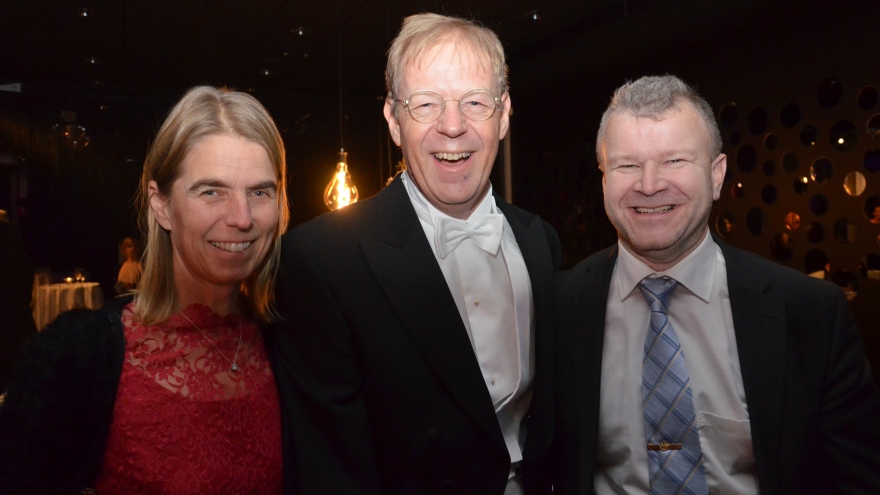 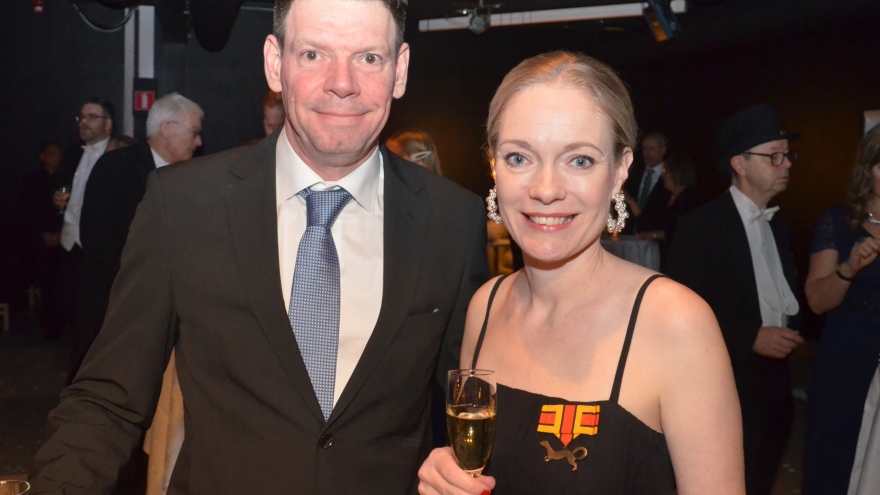 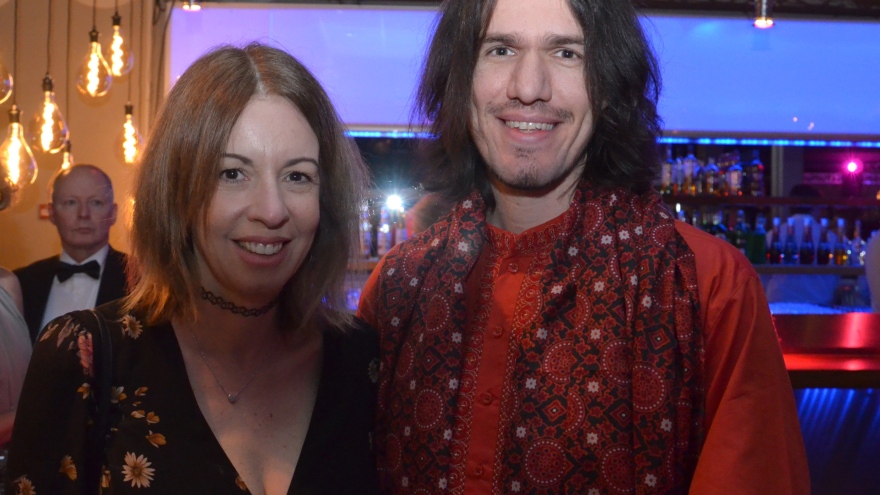 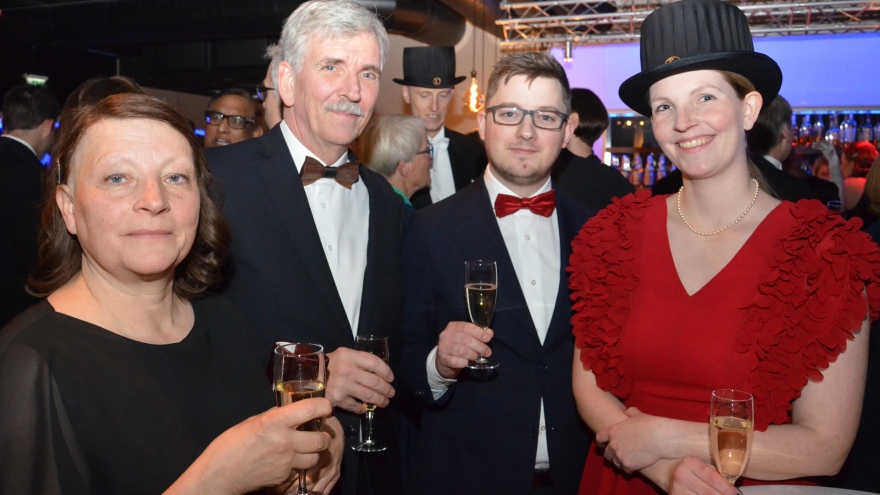 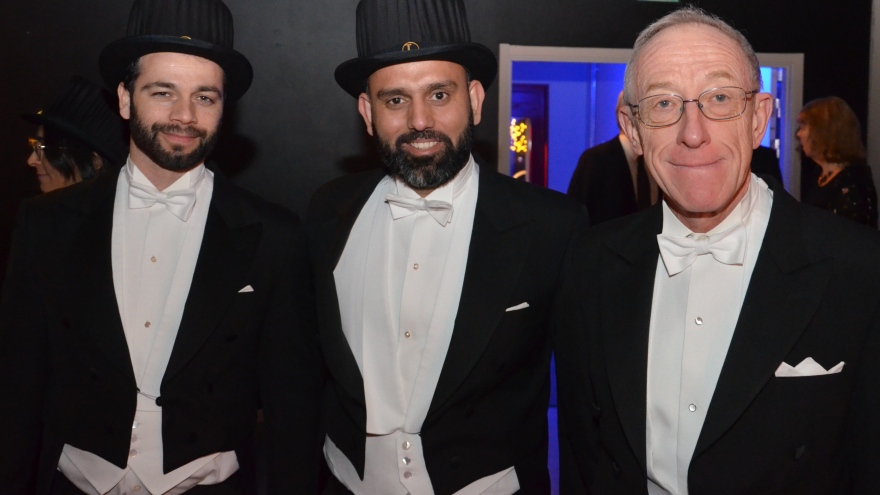 Students Charlotta Waltersson, Andreas Grönberg and David Bergdahl from the School of Music provided much appreciated entertainment during the banquet. 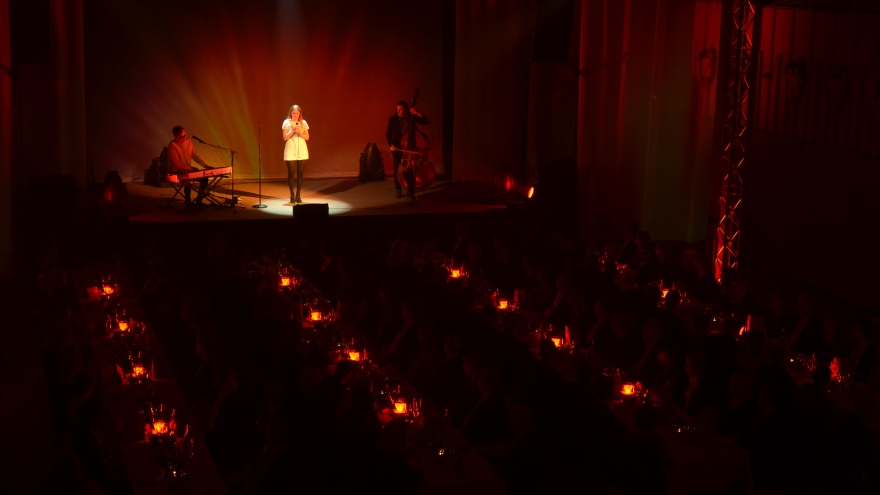 The banquet was held in Ljusgården. 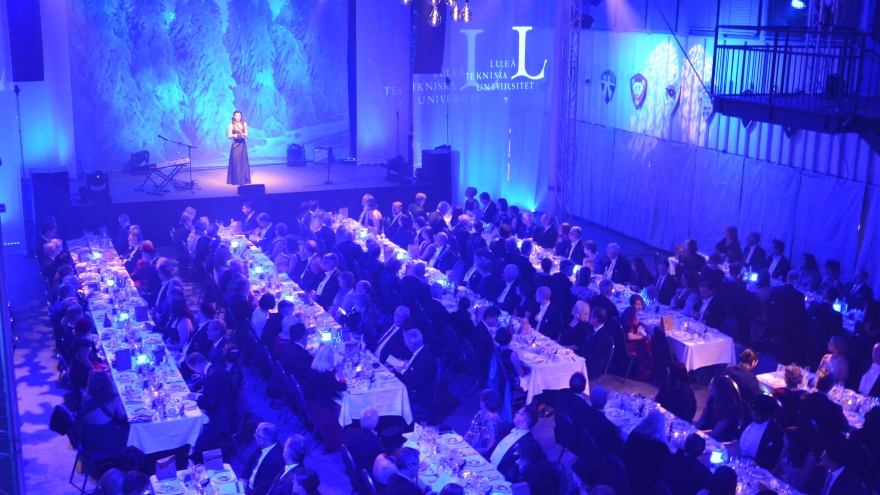 This year's menu was composed by chef Sebastian Gröndal. To the left, lead marshal My Malmgren. 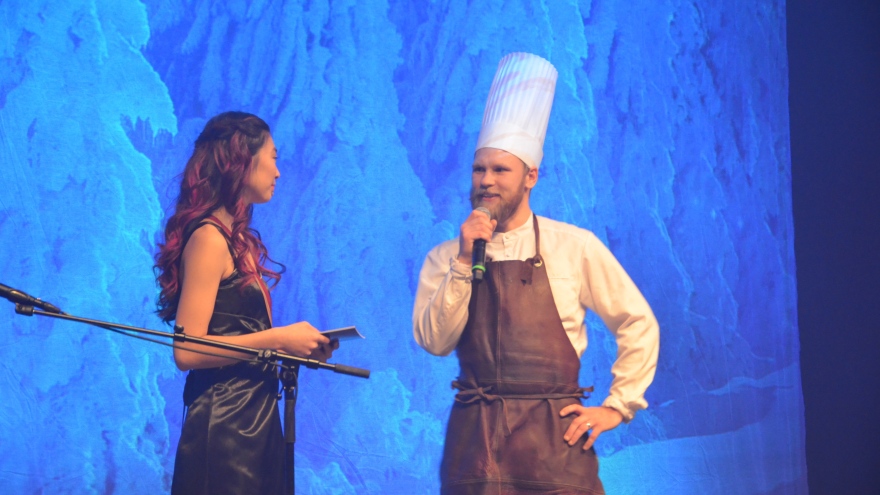 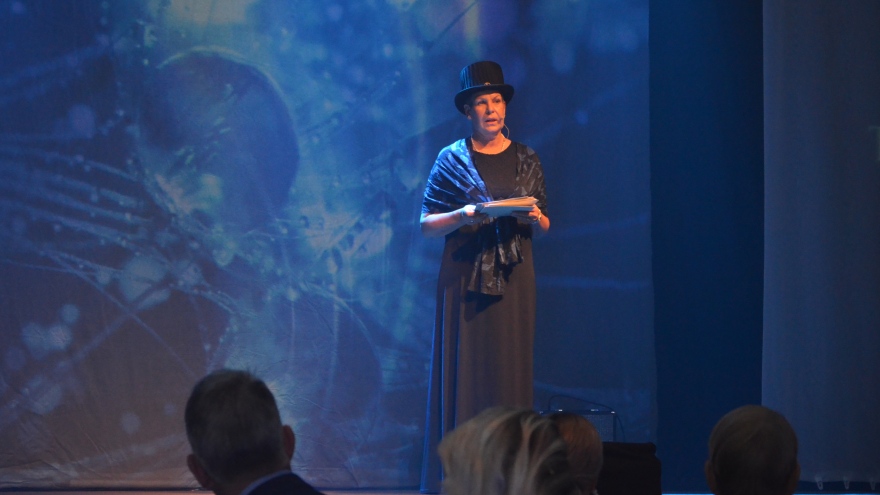 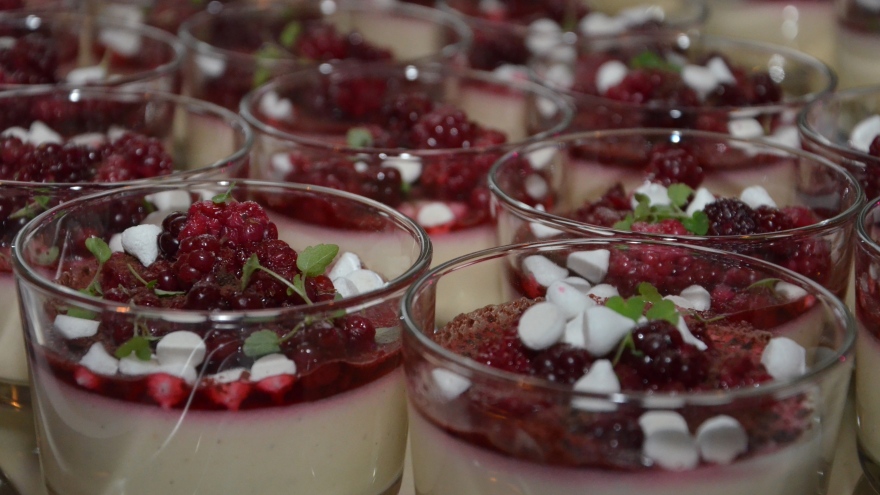 – Luleå University of Technology is an important actor in the green transition. In our current vision, which is in its final year, the aim is to contribute to an attractive and sustainable society. Looking back over the last ten years, it is therefore with joy and pride that I can conclude that universities have contributed in a highly tangible way to a more sustainable world; environmentally, socially and economically, said Vice-Chancellor Birgitta Bergvall-Kåreborn in her speech.

At the ceremony in Aula Aurora, Luleå University of Technology's new doctors and new Honorary Doctors Thomas Öström, CEO and co-founder of the clean tech company Climeon, and Pär Lärkeryd, CEO of Norra Timber, were promoted.

The university's new professors were installed and the adjunct professors received their diplomas. In addition, prizes were awarded for prominent achievements.

In her speech, Birgitta Bergvall-Kåreborn highlighted important research results and progress over the past decade, ranging from more sustainable mining to bio-based fuels, wood construction, smart industrial systems, artificial intelligence and robotics, innovative work in healthcare and the importance of culture for an attractive society.

– We know that sustainability and the work for a better future are a hugely important issue for our students. It is of the utmost importance that we are good role models and that our education is up to date and relevant, in this area and others, she said.

For the music at the ceremony stood the Chamber Choir of the School of Music at Luleå University of Technology with conductors William Berglund and Andrew Hermon; Jenni Halonen, flute, and the clarinet quartet Bassel Shamoun, Stina Bohlin, Richard Greenwood and José Luis Relova. The fanfare is composed by the University's senior lecturer Fredrik Högberg.

The menu was composed by chef Sebastian Gröndal and consisted of chanterelle soup, braised moose with root vegetable terrain and vanilla bavaroise with arctic raspberries.

Trio Biff, students Charlotta Waltersson, Andreas Grönberg and David Bergdahl from the School of Music, Snapsakademien, Kompaniet and DJ Ove stood for the entertainment at the banquet.