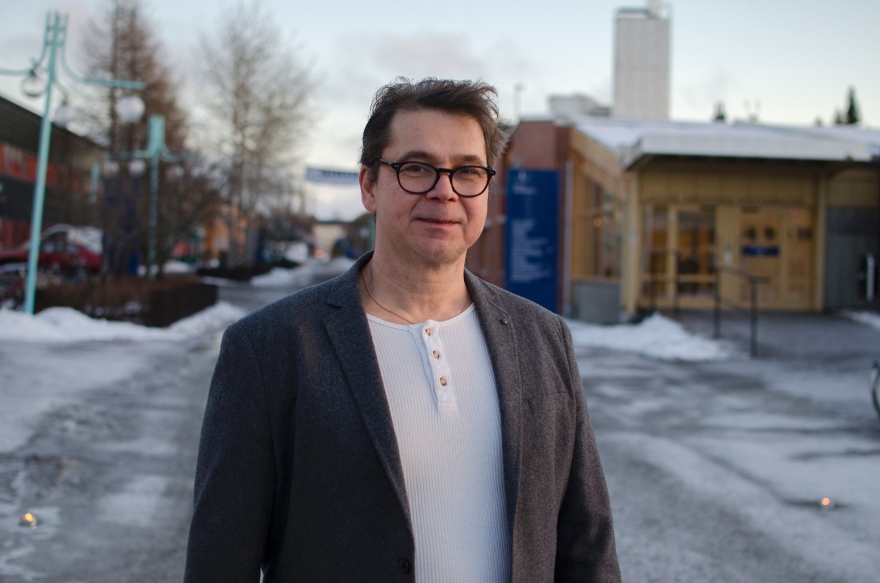 – We have developed a computational technique to calculate loads and flow behaviour that occurs on the blades with ice. We can classify and measure where there is ice on the blade and how much there is. A calculation technique for the blade dynamics is also developed and a simulation of how ice grows. In addition, a project is on going to measure data in order to predict when a failure will occur, says Jan-Olov Aidanpää, Chair Professor in Computer Aided Design at Luleå University of Technology. 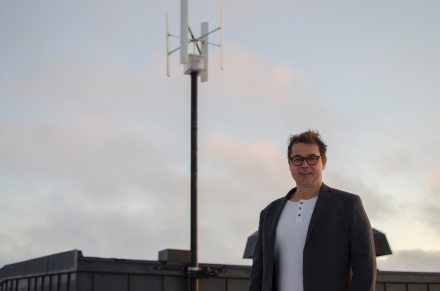 On D-the roof is a wind turbine in a mini format used for research on icing. Photo: Ted Karlsson.

The expansion of wind power, particularly in northern Sweden, is on going. The country's northern part offers good wind conditions and cold air is heavier and provides more power. However, there is a problem with wind energy in cold climates and it is that in some years there are substantial problems with icing on wind turbine rotor blades. The ice makes wind turbines forced into lengthy downtime; moreover, it is dangerous when large blocks of ice releases from the spinning blades.

– During a problematic winter icing can cause a wind farm to loose 25 percent of annual production. Without a de-icing system the ice in northern Sweden can remain for a long time. It causes major costs for energy companies and the bearings in the turbines may also be damaged by the downtime, says Jan-Olov Aidanpää.

Have a holistic perspective

Several research subjects at the Department of Engineering Sciences and Mathematics at the LTU cooperates in wind energy in cold climates. Mechanics in energy systems is an area that the University is nationally and internationally prominent within. One group is looking at how the ice is formed, a second look at the flow behaviour of the blades and how this affects the entire wind turbine dynamics. The third group works with monitoring using measurement data so that problems can be anticipated.

– We are very good in terms of a holistic approach for wind power in cold climates, ranging from how ice is formed to how it affects the machines and how we can measure the icing area.

Right now there are three techniques for solving the problem of icing on wind turbines, however, all three have weaknesses. The first is to paint the blades black and wait until the sun melts them. It works in countries with high radiation intensity, but it works less well in our northern climate. Another system blows warm air inside the blades; it works if it is lighter icing. A third solution involves having heating mats embedded in the rotor blades. The de-icing is effective, but fires can occur and there can be short circuits. Adding electrical equipment also makes it vulnerable to thunder in the summer.

A three-year project on wind energy in cold climates financed by the Swedish Energy Agency, LTU and SKF is now completed. The researchers now hope for new funding.

– We hope for a new call for applications, we would need to take the next step and work with more real applications. Until now we have mainly worked in the laboratory and numerical environment, but we want to make calculations on real wind turbines and be able to validate that our model gives reasonable results. In short, it is about experimental validation of the developed models from ice creation to dynamic consequences, says Jan-Olov Aidanpää.