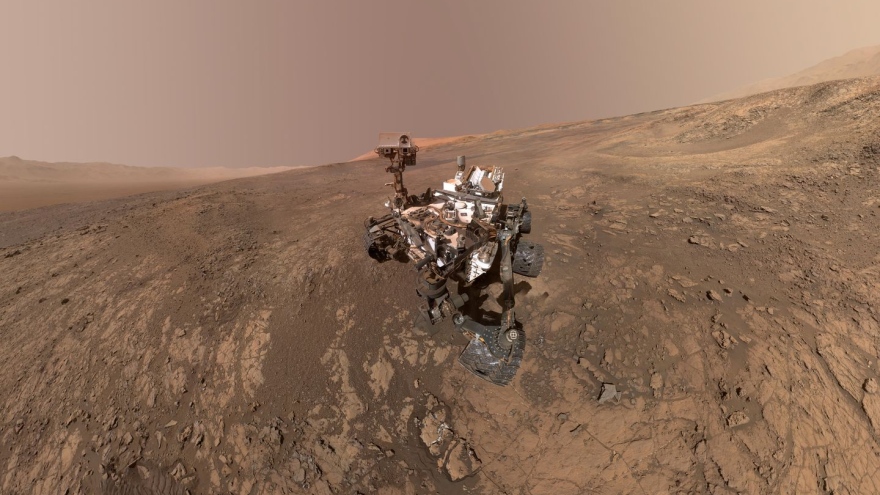 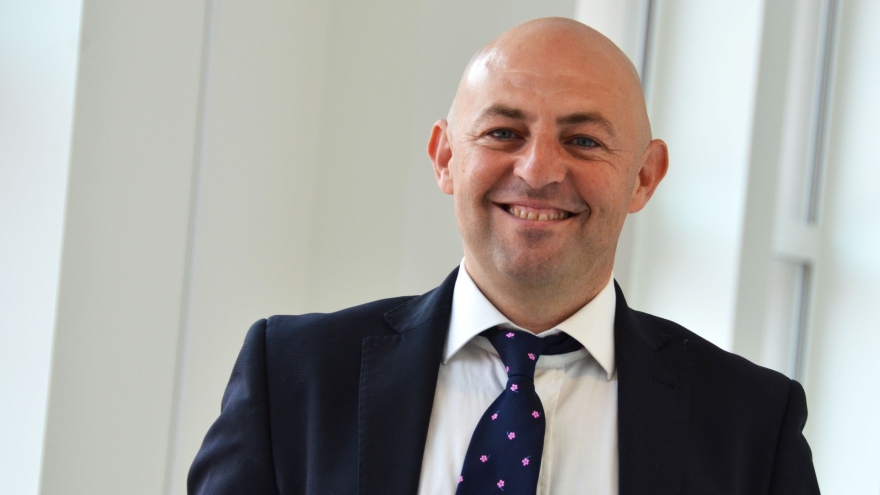 The issue of life on Mars has long fascinated humanity. 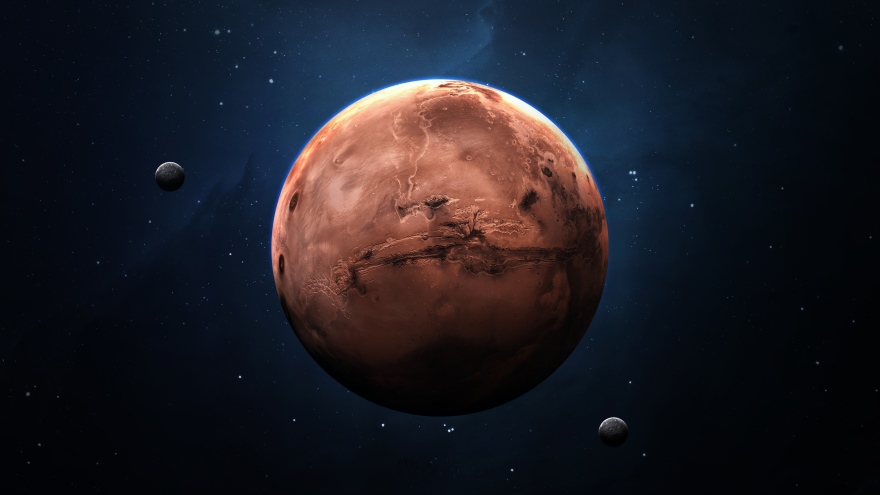 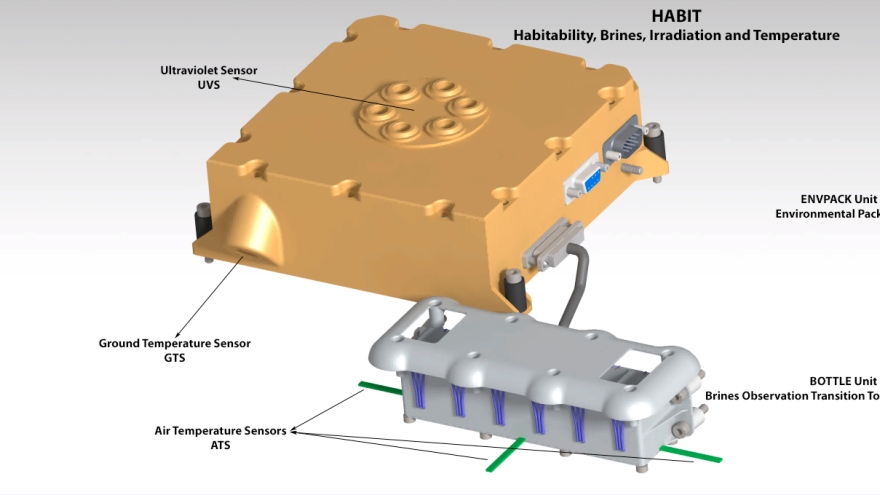 The meteorological station REMS onboard the Marsrover Curiosity. Photo: NASA/JPL-Caltech 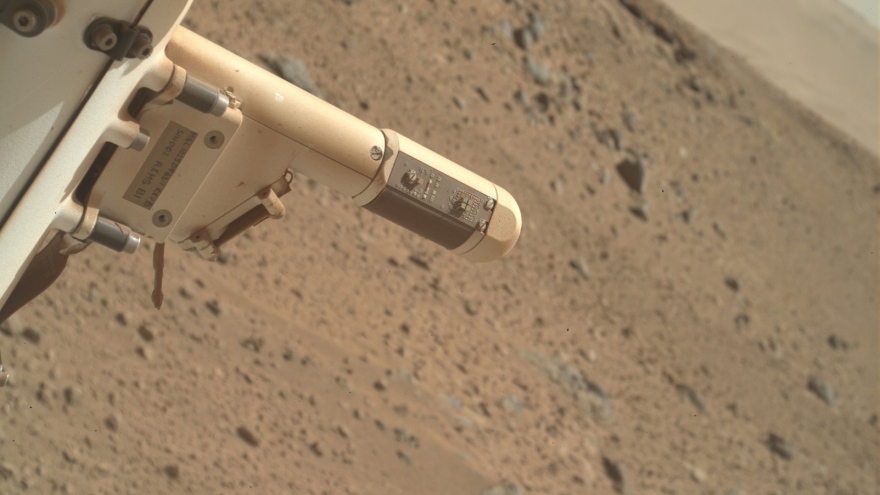 The findings about water on Mars was featured in Nature Geoscience 8, 357-361 (2015): Transient liquid water and water activity at Gale Crater on Mars.

Here you can read more about the surface platform that HABIT will be attached to.

In August 2012, after an almost nine-month journey through space, the unmanned rover Curiosity landed on Mars. On board Curiosity is a meteorological station called REMS (Rover Environmental Monitoring Station) that can measure humidity, pressure, temperature, wind speed, and ultraviolet radiation.

With data from REMS, scientists eventually made an astounding discovery: on Mars there are thin films of liquid brines that evaporate over night – there is a daily water exchange between soil and atmospehere. The conclusion was that salts found in the ground surface of Mars can absorb water vapor from the environment. The discovery was the first to establish that there are conditions for the presence of liquid water on the planet.

The research had a great impact and was presented in Nature Geoscience. The idea of water and thus life on Mars, took off quickly. However, Javier Martín-Torres, Professor of Atmospheric Science at Luleå University of Technology and responsible for the research results, is cautiously optimistic. He believes that for life as we know it, it would be very difficult to survive on Mars.

– From the Martian surface five centimeters down, the conditions are inhospitable due to the strong radiation and the mean temperature values. The environment can be more favorable below the surface and thus perhaps a possible refuge for life, but we do not know that.

So if there is life on Mars, we do not know yet. But the discovery of a water cycle may give us clues about the planet's history and an indication of whether it is possible to inhabit the planet or not.

The future is close

The exploration of Mars continues step by step. The research group in Atmospheric Science at Luleå University of Technology has built and developed the instrument HABIT, an instrument to be sent to Mars with ExoMars 2022. ExoMars is a mission coordinated by the European Space Agency (ESA). In 2022, a rocket containing a rover and a surface platform will steer towards Mars. The task of the rover is to move around on the planet while the platform, on which HABIT is stuck, will stand still in one place.

The purpose of HABIT (Habitability Brine Irradiation and Temperature) is to monitor the formation of brines on Mars and the conditions under which it occurs. The instrument consists of two units. The first one, BOTTLE, has six different vessels in which there are salts. If there is water in the atmosphere, the salts will capture the water and through sensors in the vessels, tell us how much. The second unit, ENVPACK, measures UV radiation, wind and temperature.

If HABIT succeeds with its task of presenting undeniable evidence that there is floating water on Mars, it may have bearing on future exploitation and the dream of sending people to the planet.

– Since people need to be able to produce water for their survival, HABIT can give us answers to the question if it is possible for us to settle on Mars, says Javier Martín-Torres.

2017-04-07 Scientific experts have identified two possible locations on Mars for the landing site of the ExoMars2020 expedition, where the mission is to find life on the red planet. Luleå University of Technolog...

2016-04-18 A prototype of the instrument HABIT that will be sent to Mars in 2020, will be tested during a NASA expedition to a Martian like environment in northern India. – It is a very prestigious expedition. A...

Research in Luleå is confirmed by NASA's discovery

2016-03-10 Professor Javier Martin-Torres led the group of scientists, that in spring 2015, for the first time found evidences for liquid water conditions on Mars. Now NASA has moved one step further in the sear...

2015-12-02 HABIT is the name of the first Swedish instrument to be placed on the surface of Mars. It was developed by an international research team led by Professor Javier Martín-Torres and Professor María-Paz ...

2015-04-13 A very important discovery has been made on the planet Mars. Brines that evaporates during the night proves that there is a water cycle on Mars. The spectacular findings are published in Nature Geosci...