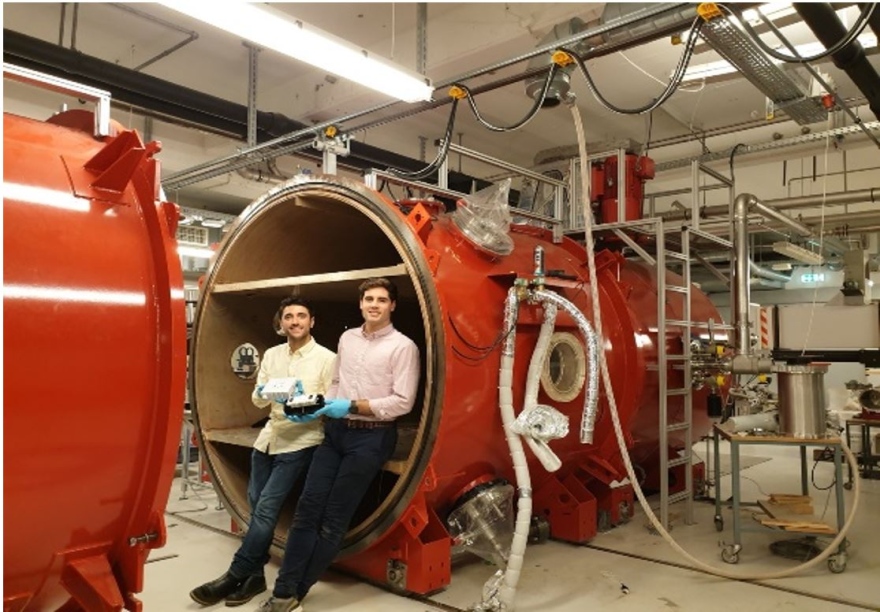 The tests were run by GAS Ph.D. candidate Álvaro Soria-Salinas and the research engineer Roberto Mantas Nakhai, with the support of Professor Jonathan Merrison and Mr. Jens Jacob Iversen from the Aarhus University.

The Mars Simulations Wind Tunnel is a facility which has been specially designed to simulate the dusty surface of planet Mars. Constructed within an 8-m long, 2.5-m wide pressure chamber, the Aarhus Mars Simulation Wind Tunnel located in Aarhus Universitet has attracted researchers from all over Europe and the United States, to test instruments and equipment for a wide range of Mars missions and is part of the Europlanet consortium. Recently, they have been granted again with Europlanet 2024 RI.

The primary purpose of this campaign was to validate the performance of the HABIT engineering and qualification model (EQM) (3) under representative Martian near-surface wind conditions. The retrieval models for the air temperature and wind retrieval were tested to refine an algorithm that can be used during the ExoMars 2020 mission. For this purpose, a battery of typical wind speed and directions were simulated at Martian pressures, with an atmosphere of CO2, according to the data from previous missions to the surface of Mars, such as the Rover Environmental Monitoring Station (REMS) (5) Wind Sensor (WS).

The team successfully operated the HABIT EQM under near-surface Martian conditions with different operating modes, including heating, nominal and extended acquisitions. Part of the operation software which is being developed for HABIT was also tested here. This software is needed to interpret HABIT data in real time and will be the primary interface between the landed mission and the science team when HABIT and ExoMars are landed on Mars and operations are run following a daily cadency. The retrieval models for the HABIT air temperature and wind speed and direction were successfully tested and the results will be released in publications.