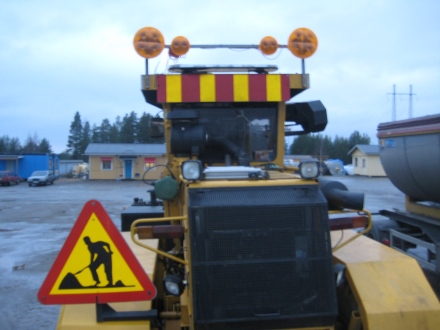 In a pre study, the visibility of the three warning lights are analyzed and compared, both individually and in combination, under varying conditions of straight, curve, crest and trough, and in daylight or darkness.

The study was conducted along two stretches of road with a good mix of alignment with the hilly and curvy terrain, long straights and the nearby woodlands. The assessment of the lamps were documented and resulted in a total of 866 observations. The lamps had different beam angles which made the visibility was affected in curves, crests and dips. One of the lights were so bright that it sometimes dazzled in the dark.

The flashing pattern that did give the best findability in all conditions was a quick double flash with a (short) break between. By comparison, it was considered that the parallel flash that lights gave off, with a frequency of 60 times / min, was rather monotonous and "soporific".

It is estimated that the tested ramp, with dual flashes, gives a very good visibility that works well for all situations tested except in dark when it can dazzle the drivers.

The installation and wiring instructions that came with all lamps were defective and could cause incorrect installation of the lamps.