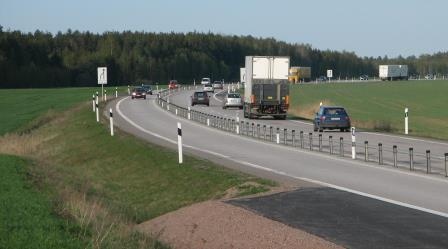 The phenomenon of so called ghost driver or wrong way driving are vehicles that for various reasons fall into the wrong lane and exposing themselves and others to danger. To end up in the wrong lane can be caused by many things such as disease, drugs and alcohol, poor visibility or that they misinterpreted the signs or design of an interchange or intersection. All attention nor that they run in the wrong direction. Especially dangerous is this on the roads with separated lanes, such as motorways and roads with wire railing. In the GRID project, Ghost Driver Detection, the research team within the Traffic Engineering at Luleå University of Technology has made a study to evaluate equipment that can detect and warn this kind of traffic hazard.

There are many unrecorded events with vehicles in wrong way in Sweden. There are several reasons for this. The concept of wrong way driving is not completely anchored in the Swedish language and, therefore, this type of accident can be difficult to sort out among the other accidents. The databases containing traffic accidents do not always provide clear answers to the causes and, above all, if there are no incidents that did not result in a real accident. To improve the knowledge of how common the phenomenon is and also evaluate how well road sensors can detect vehicles in the wrong direction and warn the driver of error a crossing has been logged for vehicles in wrong direction.

The project was funded by the Swedish Transport Administration and ended autumn 2015.