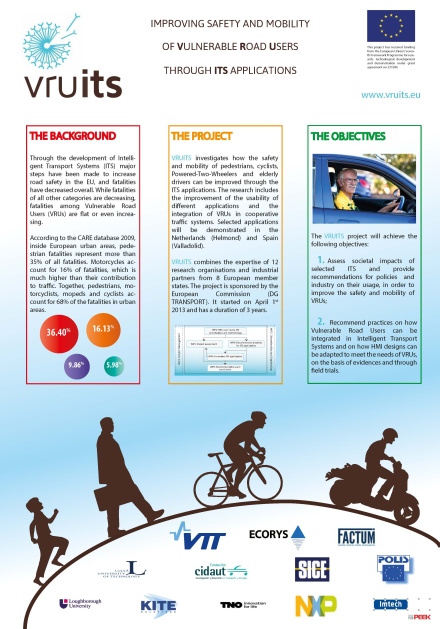 IMPROVING SAFETY AND MOBILITY OF VULNERABLE ROAD USERS THROUGH ITS APPLICATIONS

With new intelligent transport systems, ITS, accidents have decreased across the EU mainly through safer infrastructure and modern safety equipment for vehicles. For vulnerable road users such as pedestrians and cyclists the accident prone is unchanged.

In European urban pedestrian fatalities represent more than 35% of all fatal accidents. Motorcyclists and moped riders accounted for 16% of deaths which is very high compared to the number of motorcycles in traffic. Together, pedestrians, motorcyclists, mopeds and cyclists for 68% of fatalities in urban areas. A common type of accident, the crossing accidents where drivers have not detected the pedestrians, cyclist, mopedisten or the motorcyclist on time.

What will LTU investigate in this project?

- The road accessibility and comfort we will study, and the effects we have in the community when more ITS is introduced in the traffic environment. It referred to the changes in behavior of different groups of vulnerable road users such as the number of trips, number of kilometers you travel, travel time, and the number of users of specific modes. The types of systems are considered such as sensors in the vehicle to warn the driver of the vehicle to collide with a pedestrian and cyclist, or systems used by cyclists to warn of vehicles in the vicinity, says Charlotta Johansson.

What methods will be used?

How long does it usually take before the research of this kind can be implemented in our traffic?

- The study includes studying the impact of the introduction of ITS in urban traffic environment in 2020 and 2030 for pedestrians, cyclists, moped riders and motorcycle riders safety, security and accessibility. But it is based on ITS is becoming more common in society and the trend is also, says Charlotta Johansson.

Vulnerable pedestrians in the countryside

Previously LTU researched the situation of vulnerable road users in rural areas but then on behalf of the Swedish Transport Administration.

Vulnerable pedestrians in the countryside