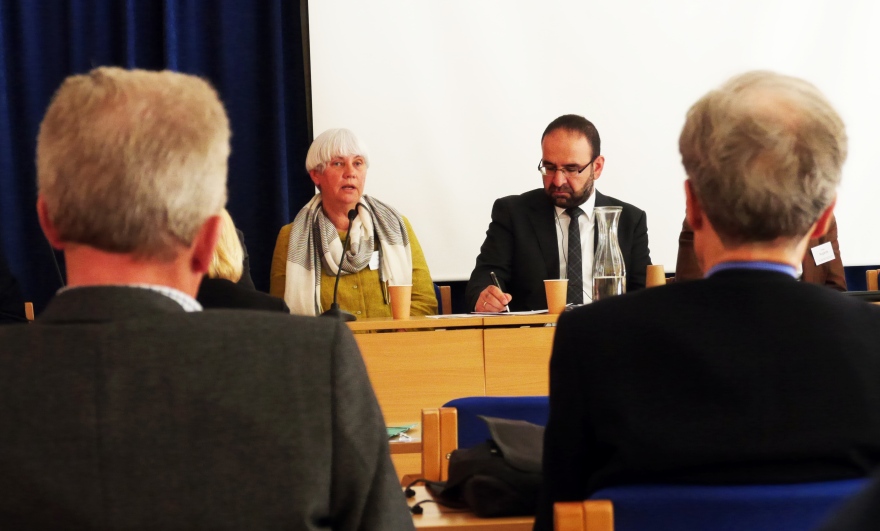 Kristina L. Nilsson, Professor in Architecture at Luleå University and Mehmet Kaplan, Housing and Urban Development Minister. The seminar ended with buzzer talks with lecturers where questions on the greatest challenges such as collaboration, sustainability, and the time were discussed. Photo: Erik Hidman View original picture , opens in new tab/window

Responsibility for Society and Social development

The speakers stressed the importance of cooperation in order to realize the attractive or the good city, mainly through collaboration between the municipality, businesses, government agencies and academia. The Kiruna urban transformation was taken up as a successful example where the municipality, LKAB, the Swedish Transport Administration, the County Administrative Board and others manages to cooperate rather than challenge each other. Above all, the cooperation with the County Administrative Board was presented as a successful model for a short planning process.

–  Mehmet Kaplan praised the collaboration as a way to simplify the process while he clearly pointed out the importance of the integrity of the parties, in cooperation whilst still being able to have the fortitude to stand up and fulfill the mission of each organization, says Kristina L. Nilsson Professor in Architecture at Luleå University of Technology.

Another trend that was raised was the LKAB and the Swedish Transport Administration's approach to their task, it is no longer about business development or infrastructure development, both call their responsibilities for social development. In LKAB's case, this means synergies between attractive Kiruna and attractive employer synergies.

The project stakeholders of inhabitants were a bit forgotten in the discussions. So it was liberating when Peter Nygård as last talked about the Kiruna Vision 2.0 development where over 10 000 people in one way or another have contributed to the vision. The Vision is relatively detailed about how residents wish to build their new City of Kiruna. With the development plan it seems like the inhabitants have done their part as partners and the development plan is the basis for further cooperation at the municipal, government and industry level.

Mehmet Kaplan presented the work that the government envisions regarding housing issues. The work is focused on solving the housing shortage and is largely to continue the work that the former government and former opposition drew up with guidelines for and to launch housing construction by simplifying the regulatory framework without compromising the requirements of fundamental rights such as accessibility. One such issue is to find regulatory changes around the construction process.

The government has also introduced a new concept about stimulating the construction of small, climate-friendly apartments. Private and public construction contractors and municipalities are offered to take part this initiative. The funds will also be available for improving the energy efficiency of the million program.

IVA: Building the future of good city - when you have the opportunity to start from scratch