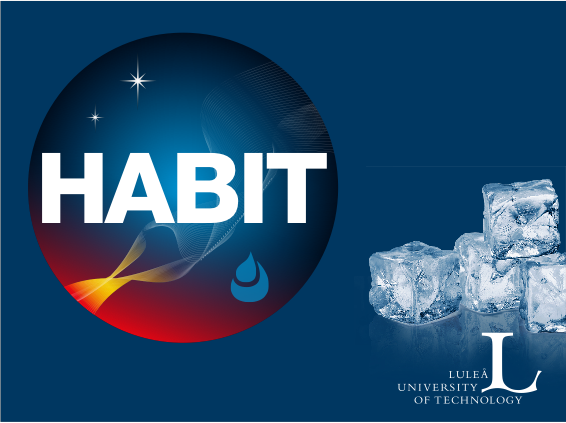 The HABIT (HAbitability, Brine, Irradiation and Temperature) instrument has been selected as European payload element for the surface platform of the ESA-IKI ExoMars 2018 mission to Mars. This was officially communicated to the HABIT PI on 19th November 2015. Through this official announcement the Director of the ESA Science and Robotic Exploration Programme congratulates the HABIT team partners and national and academic authorities and thanks the team for the past and future support of the ExoMars mission. This selection was made after a thorough international evaluation process, including the approval by the Payload Review Committee (consisting of independent scientists, with competences covering the main scientific areas of the mission), the ESA science advisory bodies, the Science Programme Committee (SPC), and the Programme Board for Human Spaceflight, Microgravity and Exploration.

The HABIT instrument is dedicated to investigating the habitability on present day Mars by quantifying the availability of liquid water, the thermal ranges and UV doses. It includes the BOTTLE (Brine Observation Transition To Liquid Experiment) compartment to capture at nighttime atmospheric water by deliquescence of salts, and 3 environmental sensors devoted to monitoring the full diurnal and seasonal variations of the ground and air temperature, and the UV irradiance. These three sensors shall complement the existing environmental package of the spacecraft, which has Pressure and Relative Humidity sensors, providing a full equivalent to the existing REMS (Rover Environmental Monitoring Station), which is operating on Mars on board the Mars Science Laboratory (MSL) through more than 2.5 years. The 3 environmental sensors of HABIT will allow to constrain the habitability at the landing site in terms of metabolic and reproduction temperature, calculating the heat-flux and the UV biological dose, providing the Relative Humidity of the ground and air, to study the atmosphere/ surface water interchange, provide information about winds (which shall be useful also for the rover drilling and sampling operations), and about thermal inertia and subsurface thermal profile and hydration level complementing the studies of the other platform and rover instruments. It will also provide the concentration of the atmospheric trace gas ozone (complementing orbiter observations from NOMAD-TGO) and atmospheric UV opacity (providing continuous monitoring of the dust cycle). The BOTTLE unit is furthermore designed as an ISRU (In-situ Resource Utilization) demonstrator that shall quantify the amount of water (and derived products such as H2 and O2) available for future landed missions on Mars.

HABIT will provide environmental information that, because of its heritage from REMS which is operating on Mars since August 2012, will allow for extra-long term climate and atmospheric monitoring and will measure for the first time liquid water on Mars in a controlled way, while providing ISRU possibilities.

Through this instrument the present day water cycle of the Martian surface shall be unveiled, quantifying the amount of water that is available for life and future ISRU applications. Professor Javier Martin-Torres led the group of scientists, that in spring 2015, for the first time found evidences for liquid water conditions on Mars (Nature Journal Paper). The data from the REMS meteorological station of the MSL-Curiosity rover were used to prove that there is a daily water exchange between soil and atmosphere and that the environmental conditions are such that liquid water can exist by salt deliquescence, water absorption by salt up to melting into a liquid drops. A few months later NASA announced the detection of evidence for hydrated salts in the soil of certain downslope drainages on Mars (Nature Journal Paper). For this detection they used images and data taken by two instruments, onboard the Mars Reconnaisance Orbiter (MRO), a satellite orbiting around Mars for ten years. The two instruments are HiRise a High Resolution camera, and CRISM a spectrometer measuring in the visible and near-infrared. Now HABIT will provide, the final proof of stability and existence of liquid water on present day Mars.