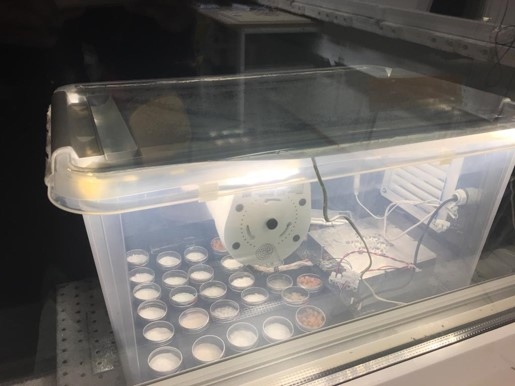 The environmental conditions during this campaign reached temperatures as low as -26°C and the relative humidity was varying around 60%. The experiments were run autonomously outdoors and the data were downloaded and interpreted remotely, mimicking the full process of operations on Mars.

The purpose of this campaign was to demonstrate the performance of different preparations of the salts that will be contained within the BOTTLE part of HABIT. Additionally, the team wanted to demonstrate the operation of HABIT, and its interpretation with remote access to the data. During this season, in the Arctic region where Kiruna is located, the environmental conditions in terms of Temperature (T) and Relative Humidity (RH), that are comparable to those that may be encountered on Mars and show diurnal and weekly variability similar to what HABIT will be experiencing on Mars. The scientists want to demonstrate the long-time operation of the electrodes that measure the conductivity at different heights, when these salts preparations hydrate or deliquescence.

During the outdoors experiments, different salts in various forms were tested as they may be used both for BOTTLE/HABIT or for future Earth Applications for water farming technologies.

To have the experiment running outside, undisturbed, for several weeks, the experimental setup was installed within an out-doors environmental chamber, where the air flows from the external ambient and which is transparent to allow for solar illumination. The chamber also serves to protect the experiment from winds (which are unrealistically strong as compared to the conditions on Mars) and snow (which does not exist on Mars). The environmental variables T and RH were monitored while the electrical conductivity changed. Simultaneously a set of control experiments with different mixtures of salts and different preparation procedures were also exposed to the same environment. The visual, physical state changes of these experiments were remotely controlled with an orientable web-cam that took pictures at regular intervals. These tests have been running non-stop since the 17th of January with external environmental conditions of T as low a -28°C and RH of 60% demonstrating the long-time operability of HABIT.

In parallel with this, and during the first days of this campaign, the HABIT Engineering Qualification Model (EQM) was exposed to the thermal vacuum cycle tests at the IRF Space Qualification Chamber. These tests were run by Omnisys Instruments Company.

In summary, HABIT has passed with honors all these tests and is ready for the next stages!