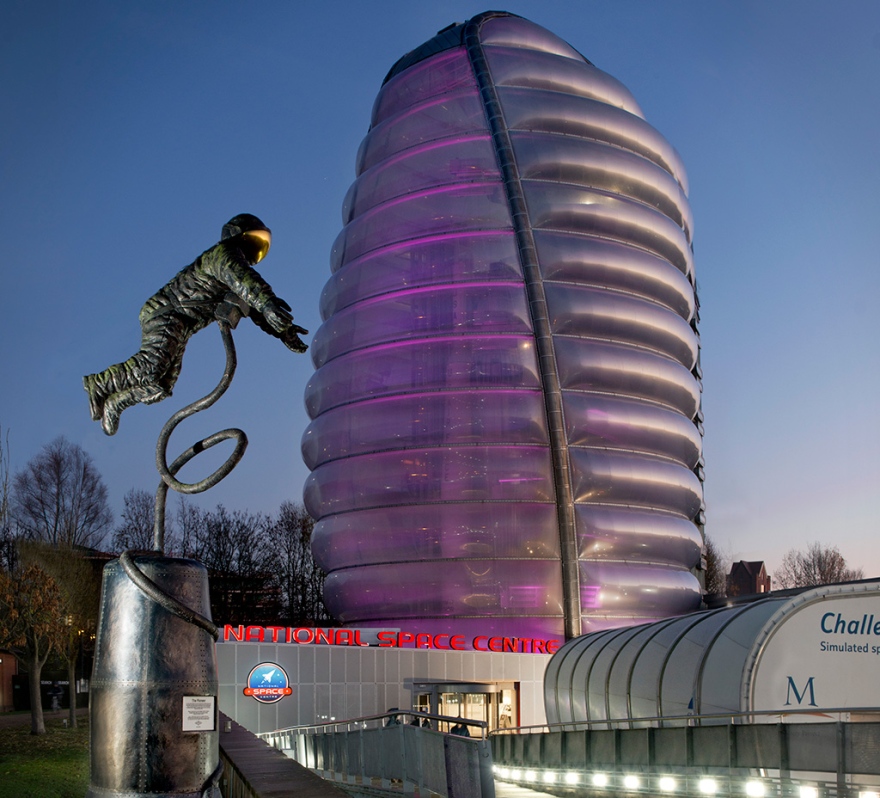 In parallel to these activities, the HABIT Tour experience will be introduced by GAS team José Antonio Gordillo Martorell in the Third Symposium on Space Educational Activities hosted in the United Kingdom by the University of Leicester and sponsored by the European Space Agency (ESA). The presentation “Touring space science: the HABIT Tour experience” explains the mains challenges, opportunities and results of this unique space science tour.

In this exhibition venue you can find real “space heritage treasures” as one of only three known Soyuz spacecraft in the West, an Orlan DMA EVA Spacesuit, one of the most successful spacesuit designs ever, or the Mercury Imaging X-ray Spectrometer (MIXS) instrument designed to arrive at Mercury in 2025 aboard the European Space Agency’s Mercury Planetary Orbiter (MPO).

GAS contributes temporally to this unique space gallery with its space instrument, HABIT. We have interviewed Professor Anu Ojha OBE, NSC Discovery Director about the presence of the space instrument in this reference institution:

-      What represents HABIT for the general storytelling of the Center as a real space instrument devoted to search water on Mars?

For future human solar system exploration, making full use of local resources – be it on the Moon, Mars or further afield – will be essential not just for long-term human colonization but also for human survival on exploration missions. In-Situ Resource Utilisation, or ISRU, is a fundamental cornerstone of the missions being proposed by global space agencies and HABIT will be the first ISRU experiment ever conducted on another world. Having the HABIT display here at the NSC will enable us to tell a much wider story in a dynamic interactive way.

-      Have NSC had previously similar exhibitions as the HABIT Tour with faithful replicas of the instrument that can be touched as a way to open the “black box” of the space technology?

We have had previous displays of space-flown experiments and hardware, but these have been “heritage” rather than “ground-breaking new research”. And having the combination of frontier science with direct interaction through touch will have a much more powerful impact on our school students. Teachers and the wider general public.

-      Do you think that this kind of very flexible, low-cost and portable mini space instrument exhibitions can be a good resource to inspire people with space in the United Kingdom or other parts of Europe?

The impact of this type of display is vastly under-rated. The portability and low-cost mean that it can easily be set up and utilized by a large range of partners in locations from small schools/colleges to National science education events such as New Scientist Live – meaning that the flexibility of the platform can have maximal impact both geographi

-      NSC is a very successful outreach and educative space center. How many students visit annually the Center?

We are now the UK’s largest visitor center for space sciences and astronomy with around 300. 000 visitors per year. Nearly a hundred thousand of those are school groups, mainly at the primary and early secondary level (ages 6-13) and we run education workshops on-site for around 35 000 students per year. Our curriculum-focused programs for high school and early University levels are led by the National Space Academy, which works across the UK, for ESA internationally and also with the space agencies of China and the United Arab Emirates.

-      In your opinion, what kind of learning and communication assets does HABIT provide to a family or a high school teacher?

HABIT brings together frontier science (literally!) with a compelling narrative (synthesizing the essentials to sustain human life in alien environments) and tightly linked to the core scientific curriculum in chemistry for schools. Teachers will find it a superb context for formal curriculum learning, whilst families will be amazed at how a European-led space science experiment is giving essential data if humanity is to explore the Solar sustainably.

-      Can you explain where is HABIT in NSC and why is it in this specific place? How HABIT will interact with other NSC space objects' contents?

HABIT will be in the National Space Academy teaching lab for some of the time, and on public display at other times during its loan period here. In this way, it will have multiple foci of engagement across the spectrum of outreach – from family to schools and University audiences. We are honored to have been invited to host HABIT and it will be a valuable adjunct to our permanent displays on the Solar System and robotic/human exploration.