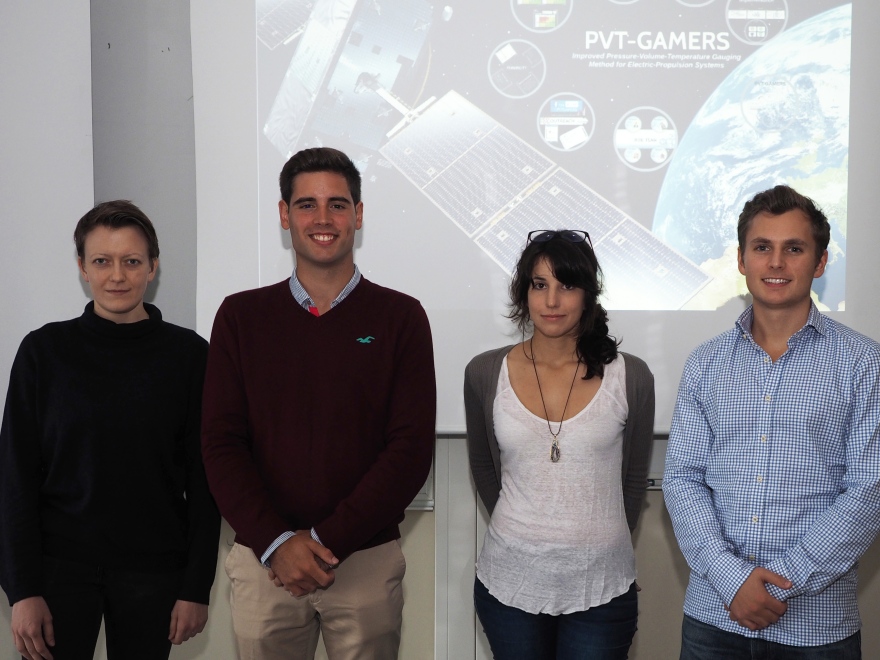 – Having the chance to defend our proposal in front of an ESA evaluation board represents a great opportunity for me on a professional level. But in the same time it keeps me aware of the seriousness that this event implies and of the high quality presentation that we have to deliver as a team, says Rita Edit Kajtar, PhD student in Atmospheric Science.

The team from Luleå University of Technology consists of PhD students Rita Edit Kajtar, Álvaro Tomás Soria Salinas and Teresa Mendaza de Cal, and Master student Filip Jensen. Maria-Paz Zorzano Mier, Professor of Atmospheric Science, is the endorsing professor and has been in charge of coordinating the team and project.

The experiment is called Improved Pressure-Volume-Temperature Gauging Method for Electric-Propulsion Systems (PVT-GAMERS) and the aim is to develop an improved gauging method to measure accurately the propellant content in spacecrafts’ tanks throughout their operational lifetime.

– The core of our experiments is to determine the mass of the gas (Xenon) that is able to flow from a highly pressurized tank into an initially empty tank under stress factors such as thermal cycles applied on the full tank's skin under a continuously changing gravitational field, Rita Edit Kajtar explains.

– Conducting our experiments during the parabolic flights, i.e. microgravity and accelerated gravity, will give us the chance to observe the behavior of the propellant under different condition than the ones found in Earth-based laboratories.

The xenon payload in spacecrafts equipped with Electric Propulsion (EP) thrusters for their attitude control and orbital transfer maneuvers has been raising over the years. This increase has overwhelmed the capacity of the existing gauging methods for measuring the propellant content in the tanks in terms of mass and density with the appropriate accuracy. The problem becomes more and more critical at the end of the operational lifetime of the spacecraft, when it is very difficult to assess, by means of this method, the remaining amount of propellant and hence to determine reliably how much time is left. This means that the commercial or scientific exploitation period of spacecrafts is underrated nowadays.

Therefore, there is a pressing need to count on a new method that makes it possible to know in every moment the remaining amount of propellant in the tanks, especially at the end of the spacecrafts’ scheduled missions, when the xenon is scant and the accurate calculation of the remnant can lead to the extension of the operative period and hence to the increase of the profitability or the scientific output of the mission.

Support from the Swedish National Space Board

Also, at the Swedish National Space Board, they are happy about the university’s success.

– Over the years, students from Luleå University of Technology have been very active in the Swedish-German student program Rexus/ Bexus. That experience will be beneficial when designing and building experiments for a parabolic flight, says Kristine Dannenberg, Head of Rocket and Balloon Programmes and Life Sciences in Space.

– The team behind PVT-GAMERS is the first Swedish student group that has applied to the ESA-program Fly Your Thesis! which is especially fun. We wish them luck in the tryouts.

10 teams have been invited to Estec (European Space Research and Technology centre) to present their experiments. Only four of the proposals will be selected to participate in the  parabolic flights 2017.