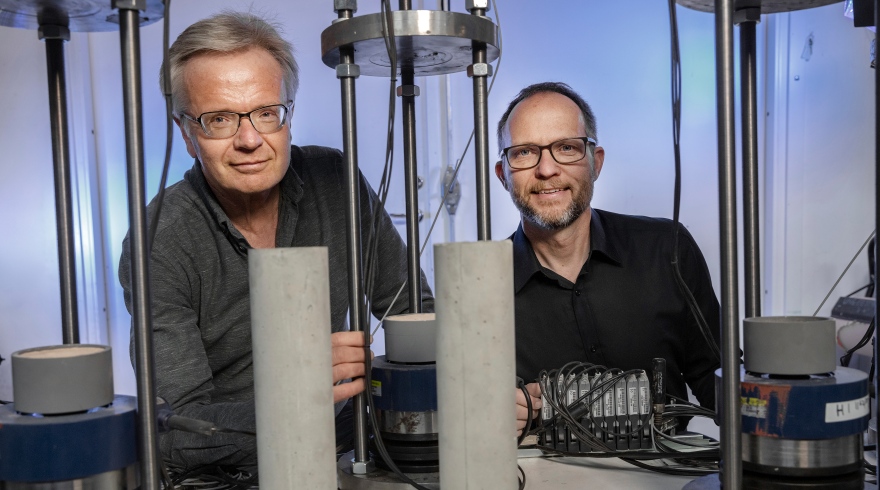 – We want to simplify the process so that the concrete engineers during the ongoing construction process on site, themselves can investigate the concrete during the casting. If you can take action on cracks - directly, the concrete harden in more healthy way without any problems. If you can avoid cracking completely, the quality of the concrete construction will be higher and the benefit is large, both in money and the environment, Mats Emborg, says, professor of Building Materials at Luleå University of Technology.

Ensured the concrete quality for the Öresund Bridge

The Thysell-laboratory at Luleå University of Technology has conducted and developed concrete technical testing in Sweden since the 1980s, including concrete testing for Sweden's longest bridge, the Öresund Bridge, and is at the forefront of Europe. The heaviest bridge foundation (the Caisson) that carries the Öresund Bridge weighs 4,700 tons. The research team at Luleå University of Technology now wants to digitize concrete construction and develop methods, which allow concrete experiments to be moved out of the Thysel-lab and that the quality tests of the cast concrete are done in real time by the concrete engineers on site.

– We will improve the methods further when it comes to follow what happens after casting the concrete, so you have a tool that automatically warns if the crack risk is getting too high or if the strength is growing too slowly. Thus, you immediately can save the situation. Today you rarely get this information, Martin Nilsson professor in Structural Engineering, says.

The concrete industry could itself handle critical moments

In the Thysell-laboratory, researchers are currently developing methods for crack control and strength development in infrastructures among other concrete applications. They study how the concrete reacts during the hardening process exposed to external loads  and when the temperature rises in a newly cast concrete element that expands and later contracts. If the concrete element is prevented to move, as, for example, in a tunnel, stresses occur and during the cooling, high tensile stresses can appear which can crack the concrete, so-called cooling cracks.This is one such a critical stage that the concrete engineer should be able to detect and prevent on site directly.

– Now we will improve the experimental methods, improve the models we have developed over the years, how we analyze the concrete and how to choose measures on the building site with wireless sensors. Simplifications are important. We call this digitilized construction and have launched the word DigiBetong for future work in the area, Mats Emborg, says.

The benefit will be 30-40 million per year

The methods developed by the Thysell-laboratory are expected to be of great importance to concrete suppliers and contractors, so that they can make forecasts and choose optimal methods on the building site, as well as for clients and consultant engineers involved in planning and design of projects such as Förbifart Stockholm.

– We have estimated the benefit of using our concrete methods to SEK 30-50 million per year, just by avoiding cracks,that optimized methods against cracks are chosen and that delays in construction are avoided. Another aspect is that the life span becomes longer for an un-cracked concrete structure, which in itself is a great merit in durability, says Mats Emborg.

– Before the end of this year, the industry has produced concrete that reduces carbon dioxide emissions by 20-25  percent. It will be very exciting to see how these new concrete types behave in our laboratory and how we can refine them, Mats Emborg, says.

A total of SEK 5 m is invested from industry and clients in the update of the Thysell-laboratory through the Swedish Transport Administration, the Swedish Construction Industry Development Fund, Cementa, Concrete Industry and the consultancy firm Bostek, as well as through Thysell's founders and the laboratory foundation of the  University.