The idea was presented by Fredrik Rosendahl on the reference group meeting on 15 May 2014. As the proposal was that the idea could be tested on the Ore Railway, ie off the track portion 119, decided the Transport Administration that the project would be implemented through JVTC which in turn contracted Sweco project. The project started in autumn 2014 and the final report in November, 2016. 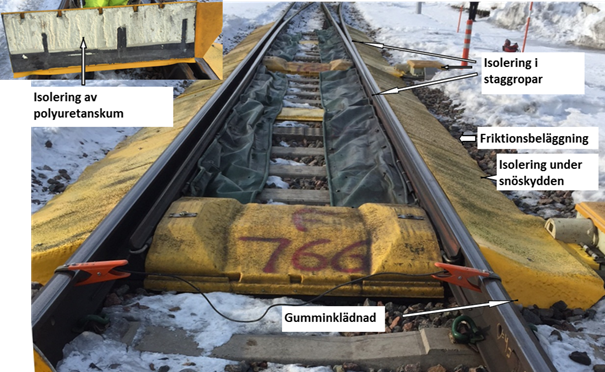 Pilot Gear in Kirunavaara with the description of the changes made.

The project is testing a new way to isolate snöskydden of switches, in order to minimize the accumulation of snow and ice in the exchange.

In discussions with the maintenance contractor and a manufacturer of protection to the mining industry was a prototype of an advanced snow protection with insulation to get a better effect of the alternating heat that is part of the snow removal strategy for switches. In addition to improved insulation provided snöskydden with a surface that will provide increased friction and that the switches that have a variable crossover, and is part of the project, get a bigger sign and lighting to avoid uppkörningar.

The results have been ambiguous for the different gears. Since the track switches not yet be installed over a longer period so the impact on the robustness in terms of the number of errors, for winter operation has been difficult to determine. It occurs only a few errors per year on the exchanges related to snow and ice. However, there is nothing to suggest that there is a higher failure rate with the new snöskydden.
There have been no uppkörningar of the bills that have been lighting and signs. Pilot gear has been 25% higher energy efficiency for switching the heat, that means that after installation has consumed 25% less energy in kWh compared to the reference points on the same station. Overall, as the test the gears, compared to the reference switches, shown results from the 25% effective 23% less effective. Three have been more effective while three have shown a lower efficiency. Two bills have had steering problems and the two have not the necessary control system to monitor energy consumption. Maintenance Contractors' comments on the new snöskydden are very positive about the function of them, around the installation, there are improvements that can be made and implemented.