The Iron Ore Line (Swedish: Malmbanan) is a 398-kilometre (247 mi) long railway line between Riksgränsen and Boden in Norrbotten County, Sweden. The line contains two branches, from Kiruna to Svappavaara and from Gällivare to Koskullskulle. The term is often colloquially used to also include the Ofoten Line. (Wikipedia).

The railway is an economical and environmentally friendly mode of transport for long distances and heavy loads. Today there is a demand for more capacity. In the short term, the existing network is expected to deliver the increased capacity. In order to achieve increased capacity without introducing double track, either the axle load or the number of trains (i.e. the annual gross tonnage) needs to be increased, which will decrease the life of the rail and thus increase the maintenance cost. The Iron ore line is of strategic interest to Sweden and the countries we export ore to.

"It is a so-called Top-of-the-Rail system that can become relevant, a train-borne variant of lubrication of the rail with a friction controlling product, instead of a more expensive stationary solution connected to the track itself. This results in reduced cracking and less noise as friction decreases. It also reduces noise levels", says Saad Ahmed Khan, Saad Ahmed Khan, PhD student in operation and maintenance engineering and Luleå Railway Research Center at Luleå University of Technology. 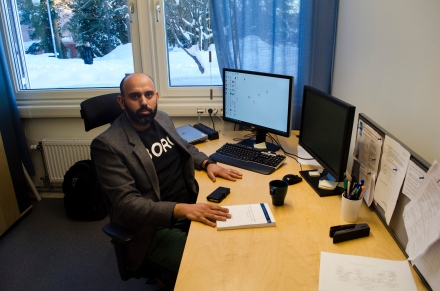 The system TOR-FM (Top-Of-Rail Friction-Modifier), has been tested in other countries with good results. But Saad Ahmed Khan also sees risks:

"With too much lubrication, the braking distances can be too long", says Saad Ahmed Khan.

The field results obtained using a handheld tribometer have shown that by using a TOR-FM, both the wear and the friction coefficients can be reduced. The content of the TOR-FM can have a significant effect on the carry distance and, generally, non-drying FMs have a longer carry distance.

Effects of top-of-rail friction modifiers on the friction, wear and cracks of railway rails
THESIS