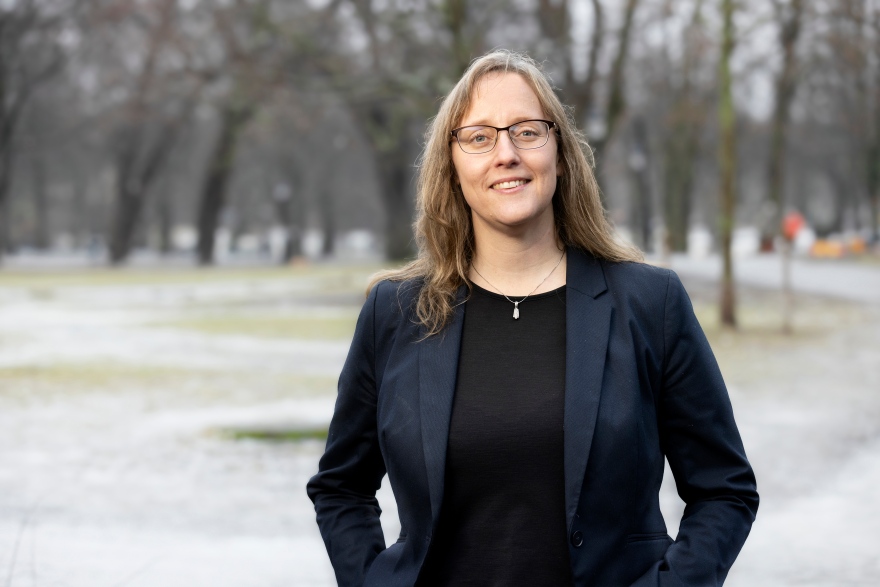 "It feels great to assume the role as leader for CH2ESS at Luleå University of Technology. I like to drive development and have experience of leadership from companies, industry and the public sector, and it gives me a holistic view of the area. And to succeed in making the hydrogen a part of the Swedish energy system, we must cooperate with each other, with different actors," Cecilia Wallmark says, who takes up the job on 28 March.

"I am extremely happy that Cecilia agreed to take over as leader of CH2ESS after me. I can´t imagine anyone more suitable for the job," Rikard Gebart, Professor of Energy Engineering and former leader of CH2ESS, says. After 33 years at Luleå University of Technology, he will retire in autumn 2022.

With a focus on hydrogen

During the past few years at Sweco, Cecilia Wallmark has run over 60 different hydrogen projects, including an international network between ten countries for business development in the field of hydrogen. Her focus was to foster the development of sustainable energy and transport solutions. She was also highly involved in the hydrogen area, where she, among other things, was the project manager of concepts for the implementation of hydrogen in the transport sector. Furthermore, she was involved in establishing a charging infrastructure in Sweden and related action plans. In 2021, she also carried out the obstacle analysis that formed the basis for the Swedish Energy Agency's proposal to the Government on the National Strategy for Fossil-Free Hydrogen.

"The most important message in the hydrogen strategy is that hydrogen must be seen as a natural part of the Swedish energy system. That we have finally reached this point is because Swedish industry has succeeded in changing the view of hydrogen in Sweden; they have said "we believe in this". LKAB, SSAB and Vattenfall, through their partnership Hybrit, are the first companies in the world to say that they will implement hydrogen in the entire chain of steel production, and Ovako, H2 Green Steel and others also make large investments with full enthusiasm," she says.

Europe is investing in hydrogen

The basis of the Swedish hydrogen strategy is the EU Commission’s adoption, on 8 July 2020, of a hydrogen strategy for a climate-neutral Europe, with the aim of accelerating the development of clean hydrogen, as a keystone for a climate-neutral energy system by 2050. This is the first time such a goal is set, and it naturally provides the opportunity of more funding for technological development and production in the hydrogen field.

"But when it comes to succeeding in implementing hydrogen in the energy system, we are at the initial stage. What we build together now, affects the outcome later," she says.

Luleå University of Technology responded with a hydrogen investment

10 months after the decision of the European Commission's hydrogen strategy, Luleå University of Technology launched its hydrogen initiative Center for Hydrogen Energy Systems Sweden, CH2ESS. The initiative is unique as it comprises all subject areas at the university. For hydrogen to become part of the Swedish energy system, many different disciplines are required, for example, energy, electricity, materials, construction, health and economics.

"I´m convinced that CH2ESS will contribute in several ways to the implementation of hydrogen in the energy system, partly through our educational offer in areas ranging from advanced analysis to practical handling of hydrogen, partly with our research and development. Together with actors in the market, we can further develop the technology that already exists in the hydrogen field. We spread knowledge and creativity and collaborate with other actors in Sweden and around the world, and we both support and drive development in hydrogen," Cecilia Wallmark says.

Hydrogen only where it is the best option

When talking about hydrogen, she uses the term renewable hydrogen.

“The important thing about hydrogen is how it is produced. In the world today, hydrogen is often produced from natural gas, a fossil fuel with large carbon dioxide emissions. But if hydrogen is produced from, for example, wind power, we can create value chains that have almost no emissions at all. Basically, it is the emission-free possibility that makes hydrogen so advantageous," Cecilia Wallmark says.

However, she does not believe that hydrogen is the solution to everything when it comes to a sustainable energy system, and she does not like to talk about hydrogen economy or hydrogen society.

"I think you should use the hydrogen where it is the best option to use. You have to be realistic. Hydrogen should only be used when there is no better alternative," she says.

Northern Sweden's forerunner in the world

She highlights northern Sweden as one of the regions in the world that now shows that hydrogen establishments will become a reality, which also means that the rest of the world closely watches us.

"A challenge for the industry when hydrogen is implemented is to technically produce products that are good and cheap, and to show in terms of resources and financing that they are at the forefront in the hydrogen area. With the university's pilot plant for fuel synthesis, LTU Green Fuels, we can give companies a chance to pursue development in the hydrogen area instead of relying solely on the development by suppliers. The conventional division of “who does what” in the production chain in the field of energy and steel production may change with the introduction of hydrogen," she says.