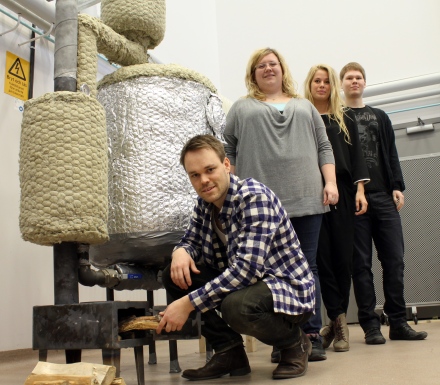 - They have been very curious about our project in northern India where they have staff who have been in touch with us. We have sent a report in English, to enable them to assess whether there is something that can be implemented, says Johan Stenvall one of the students in the project.

- It is very useful to have the possibility to work in practice and in groups since that probably will be the reality when you get to work after the studies. It is very instructive rather than just sit and make theoretical calculations on things you do not see practically says Annelie Nyqvist , which is another student in the project. 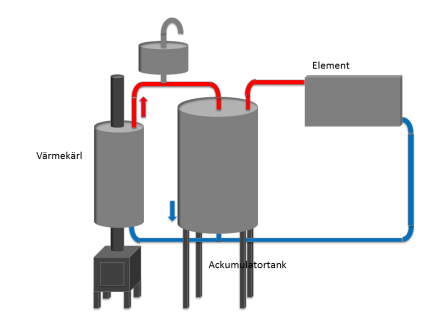 Outline of the LTU student's prototype

The students' assignment was to help a fictional family in a developing country with their need for energy and do it in an engineering and sustainable manner. Their work was, not only to present a technical solution, but also a comprehensive survey of needs in developing countries. In an initial stage, the students had also contacted the Red Cross, that could give responses to their survey. From this work came the idea of ​​creating a sustainable and relatively inexpensive heating solution for developing countries such as northern India, Siberia, Mongolia, Afghanistan, North Korea, the Caucasus, and northern China.

- There are many people who make fires indoor and do not evacuate the smoke from their home and there are two million people who die from it each year, then there's tens of thousands who die of cold each year and in both cases, our construction can be useful, says Johan Stenvall . 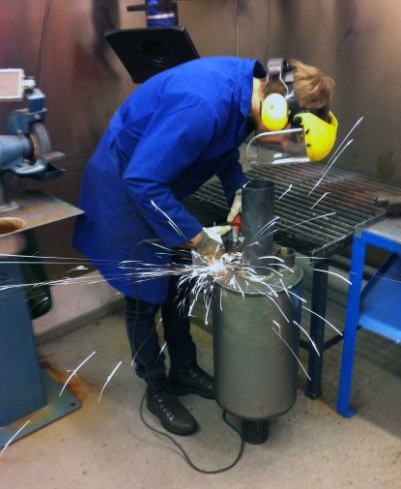 The student Alfred Wikner welding a heating vessel which is part of the group structure.

A simple stove with integrated heat recovery, could be a simplyfied describsion of students' heating solution. From a relatively small heat source (stove), heat will fluide, as gasified smoke via a channel
through a heating vessel filled with water and by natural circulation charging an accumulator and a radiator. Through complex calculations, based on existing technologies for an accumulator system, the students have been able to design a miniature model suitable for developing countries.

- We wanted to get something unique that no one has done and it seems that it hasn't been done on the scale we have chosen and that is also why it seems to be interesting, says Johan Stenvall.

A low production cost, combined with recovering various parts such as radiators, allows students design to be feasible in developing countries.

- We absolutely believe that this is something that one can make use of when we kept a low production cost and in mass production is even lower, says Johan Stenvall.