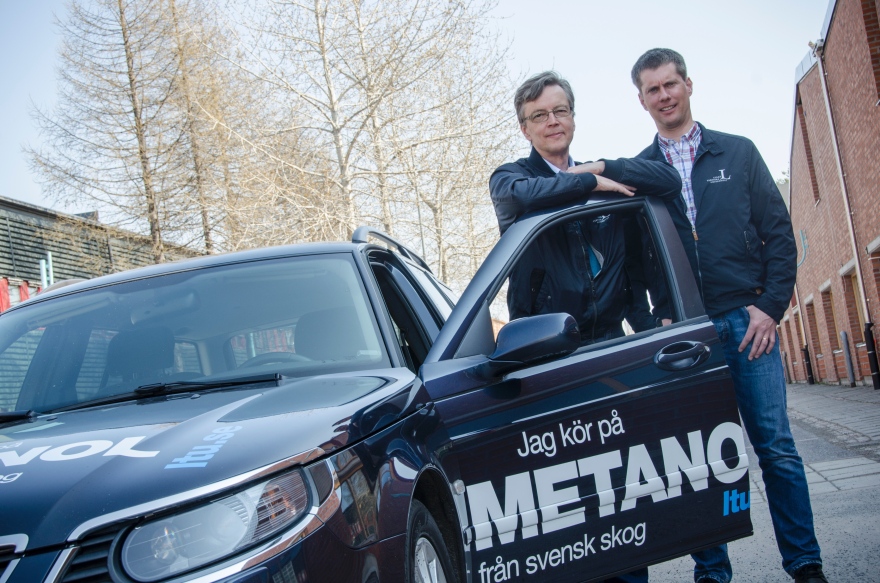 The trip from Luleå to Stockholm, which is approximately 1000 km, begins at 04:00 on Monday, May 9. You can follow the trip on https://www.facebook.com/metanolresan/

- I cannot guarantee that we will make it all the way to Stockholm, but I expect that we will. It would, in that case, mean that Sweden has an excellent opportunity to move quickly towards a fossil free transportation system, since there is around 250 000 E85 vehicles already in use in Sweden today,says Rikard Gebart, professor of Energy engineering at Luleå University of Technology.

On the road with Swedish-made methanol from forest

- At Luleå University of Technology we have the knowhow, both practical and theoretical, to produce methanol from forest waste, since it has been tested for more than 10 000 hours in the pilot plant, says Rikard Gebart.

The Green Fuel pilot plant for synthesis gas (syngas) process development is the only plant in the world that can produce methanol from forest waste. The researchers have, together with industry, developed a unique gasification process that has proved to be both reliable and robust. The methanol is produced by gasification of a mix of black liquor, which is a waste product from paper mass production, and bio-oil that is made through fast pyrolysis of forestry waste. The syngas is converted in a catalytic process to almost pure methanol with more than 99% degree of purity. The plant was commissioned in 2012, the same year that Luleå University of Technology took over the plant from Chemrec- a Swedish technology company. It is now time for the locally produced methanol to make the first journey on Swedish roads.

- This is the first time that someone attempts to drive an E85- adapted vehicle on renewable methanol that is produced from Swedish forest biomass in Sweden. I am conducting this public trial drive from Luleå to Stockholm for two reasons, partly to prove to myself and other researchers that a normal E85 vehicle can be run with a high percentage of methanol without any difficulties, and partly to put methanol on the agenda in the discussion about a future fossil free vehicle fleet, says Rikard Gebart. 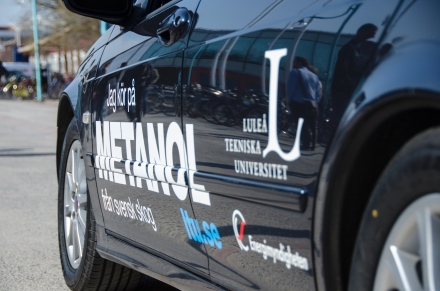 The forest waste which is used by Luleå University of Technology as feedstock in the plant comes in a variety of forms. Both liquid waste such as black liquor and solid biomass such as branches and tops of trees, are used. Rikard Gebart’s team of researchers believe that if a combination of waste is used in a smart manner then it is possible to obtain up to 40 TWh/year of fuel, using only low grade biomass and byproducts from the forest industry. The current consumption of fuel in Sweden is approximately 31 TWh/year of petrol and 45 TWh/year of diesel. If renewable methanol from forest industry byproducts and residues is combined with improved energy efficiency and increased use of electric vehicles on the roads, the production will be sufficient to phase out all transport related fossil fuels in Sweden.

-With methanol made from Swedish forest residues, we can go from 100% dependency on imported fuels to 100% self-sufficiency in Sweden, says Rikard Gebart.

Of particular interest during the trip with the methanol powered car to Stockholm, will be fuel consumption and general vehicle behaviour. After the journey selected parts of the vehicle will be removed and inspected to determine if the methanol use has caused any changes. Methanol is a very efficient solvent and some engineering plastics are sensitive to methanol. Another issue to look for is corrosion that may occur if there is water in the fuel.

Fredrik Granberg, researcher at Luleå University of Technology is also on the trip.

The Methanol Journey in the media