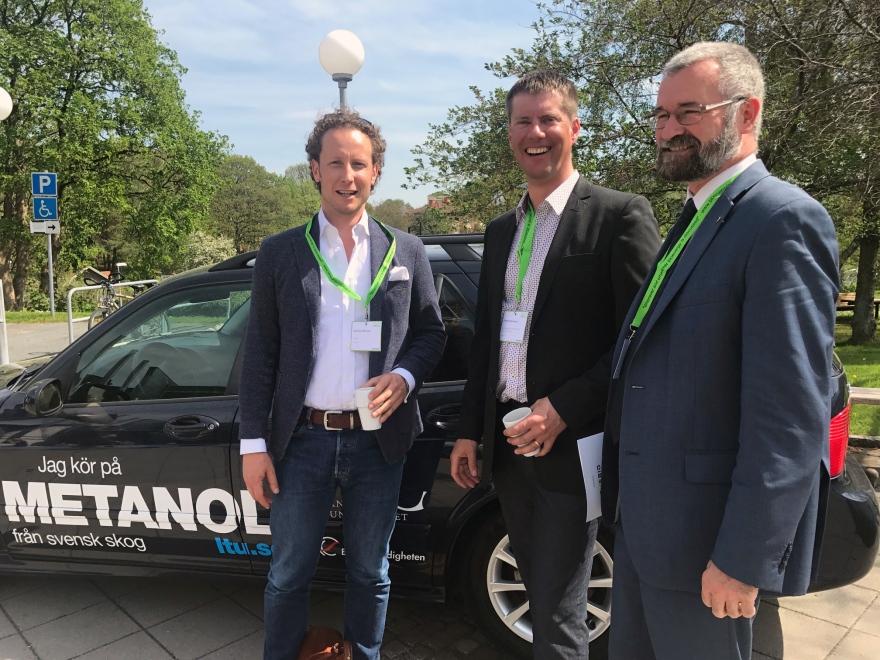 The methanol car, which is running on a mixture of methanol made from swedish forest waste and gasoline has been driven down to Gothenburg. Photo: Luleå tekniska universitet View original picture , opens in new tab/window

– It is of course very important that we participate in this conference and it is incredibly fun that we received the invitation," says Fredrik Granberg, Project Manager at Energy Technology, Luleå University of Technology and Site Manager at the LTU Green Fuels research facility.

The conference in Gothenburg is organized by the Swedish Bioenergy Association in collaboration with IEA Bioenergy and has about 150 participants from around 25 countries. There are politicians, researchers and industry representatives in place.

When the methanol vehicle  was driven, the route Luleå-Stockholm last year by energy professor Rikard Gebart and Fredrik Granberg, at Luleå University of Technology, it was the first time in the world, that an E85 adapted passenger car to be tested on a mixture of petrol and Swedish-made renewable methanol, from forest waste. The trip was very successful and received great attention.

– The methanol vehicle has been investigated by a motor laboratory at Lund University and a report is soon ready, says Fredrik Granberg.

Now the journey with the methanol vehicle has been made from Luleå to Gothenburg. The methanol used by the vehicle is made of black liquor from pulp production and pyrolysis oil at Luleå University of Technology's pilot plant, Green Fuels. Fredrik Granberg says that many persons during 2017 have asked if the plant really remains after the message of threatened closure. It does. It is mothballed but ready to start up for the implementation of new projects.

– This time I drove the methanol vehicle on M50 (50% methanol mixed with 50 percent 95 octane) for most of the stretch and finally M56 without no signs of trouble. I refueled before I left the pilot plant in Piteå and brought some pure forest methanol to blend with gasoline on the road. As it draws significantly less without a trailer, that was taken on the journey to Stockholm (about 1.1 l / 10 km), I had have about 1/4 tank left now when I arrived, says Fredrik Granberg. 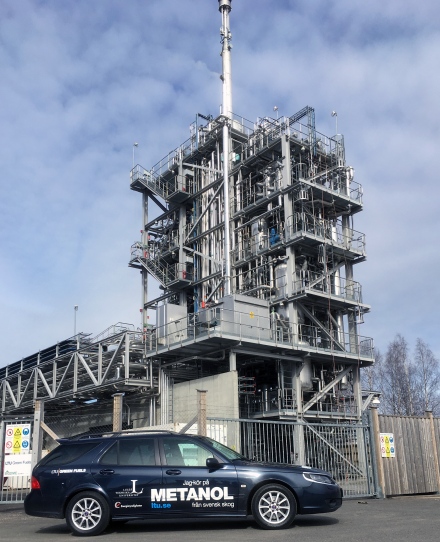 The metanol car parked outside the Green Fuels pilot plant ready to be put into operation. Photo: Luleå tekniska universitet

The forest waste that Luleå University of Technology uses as feedstock in the plant to produce the methanol is essentially black liquor but also as a mixture of black liquor and pyrolysis oil. Rikard Gebart's research team believes that if using a combination of different types of raw materials and processes in a smart way, it is possible to phase out all fossil fuels in Sweden.

– With methanol made from Swedish forest residues and renewable electrical power, we can go from 100% dependency on imported fuels to 100% self-sufficiency in Sweden, says Rikard Gebart.