The method aims to provide label free, three dimensional (3D) in situ imaging of chemical and (bio)molecular processes in different materials. The technique will give information on 3D structure, where specific species are, how they are produced, how they change, how they react to environmental stimuli, and influence the properties of a material. InFeRa will eliminate the need for separate, costly and time-consuming chemical, enzymatic or in vitro assays that destroy or modify the samples.

A schematic of the optical principle of InFeRa is shown in fig. 1.

In this project, the system will be tested on bioelectrochemical systems (BESs): BESs use microbes to catalyze different electrochemical reactions for diverse purposes. For instance, Geobacter are known to form thick biofilms on bio-anodes and can transfer electrons directly to an electrode surface creating electricity in the process. Experiments with the bacterium Geobacter sulfurreducens growing as a biofilm on the anode of a BES will be performed to investigate direct electron transfer between the cathode and the bacteria. This research is in collaboration with Dr Magnus Sjöblom, Biochemical Process Engineering at the Department of Civil, Environmental and Natural Resources Engineering.

First resonance Raman spectra of a Geobacter biofilm on a graphite electrode can be seen in fig.2. Control and characterization of 3D biofilm formation and the action of mitochondrial biomarkers will finally be performed by InFeRa. 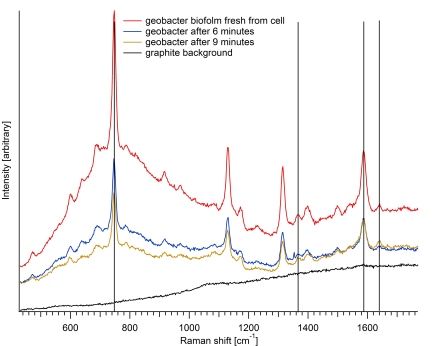 By the preliminary experiments the first vital Raman lines that respond to voltage changes have been identified, those are the oxidation state markers of cytochrome c, an electron donor protein found in the mitochondria. The Raman lines can be seen at 750 cm-1 (ν15), 1364 cm-1 (ν4), 1589 cm-1 (ν19), 1638 cm-1 (ν10). The promising preliminary results shown in fig 2 are a first prerequisite for a successful accomplishment of InFeRa.

The viability of an early InFeRa-like concept - where SRS was combined with digital holographic imaging - has in our group been demonstrated on gases. The preliminary results on methane gas can be seen in fig 3. In this experiment, to achieve stimulated Raman scattering (SRS) images, the Stokes beam was diffused over the sample while the pump beam was focused. At the region where the beams met, the SRS effect occurred and a strong SRS gain could be registered (~500%), see left hand side of fig. 3. Scanning in one direction was achieved by moving the sample. By capturing the phase image of a cold diffusion flow of methane gas by digital holography where only one laser was used (Stokes), middle fig. 3, the refractive index change could be calculated. Thereafter the number of methane molecules could be derived from both the phase image and the SRS enhancement, right hand side of fig. 3. The experiments show that the concept of InFeRa works, within the project, the theoretical basis, the signal analysis, the imaging concept and the software will be developed.

Fig 3) to the left, the SRS gain where the pump beam meets the Stokes beam in the methane gas. Middle, phase image of a cold diffusion flame. To the right, knowledge of the refractive index allowed to calculate the number of molecules in the diffusion flame both from the phase and from SRS.

The objective to be achieved in three years is an easy to use instrument that can be implemented in different settings with a robust combination of laser-, and detection systems, and a software that transforms multiplexed signals to easy to understand 3D images. Application areas are bioelectrosynthesis, as demonstrated in the project, 3D printing monitoring, combustion science, material science, biomedical science, cancer detection, life science and industry.