In this project we developed a label free technique based on Raman spectroscopy combined with microfluidics and the patch clamp technique.

The World Health Organization (WHO) classifies PH into five groups, whereby Group III (PH associated with hypoxia and/or lung disease) is regarded as the second common cause of elevated blood pressure in the pulmonary arteries. Risk factors for this form of PH include chronic obstructive pulmonary disease (COPD), sleep apnea, but also chronic exposure to high altitude. This severe disorder relies - at least in part - on Hypoxic Pulmonary Vasoconstriction (HPV). HPV is a physiological mechanism that tightens (constricts) pulmonary arteries due to the shortening of PASMCs in response to oxygen shortage (Hypoxia) in the lung [3, 4]. Thereby, HPV optimizes gas exchange and maintains optimal arterial oxygenation during regional ventilation disturbances [4].

The impact of this vital mechanism becomes evident in lung failure as it currently occurs in the Covid-19 pandemic: insufficient gas exchange due to disturbed HPV often leads to death during lung infections which are either caused by bacteria or viruses, such as Sars-CoV-2. Moreover, widespread and chronic hypoxia in the lungs, e.g. due to chronic lung diseases, lead to PH due to HPV and subsequent vascular remodeling processes in pulmonary arteries [5, 6]. As a result, the right ventricle of the heart has to compensate for the increased vascular resistance, which can ultimately - due to the constant work-overload - result in heart failure [7]. Thus, understanding the underlying mechanisms of HPV is the prerequisite to develop treatment strategies for life-threatening lung diseases which impairs HPV. 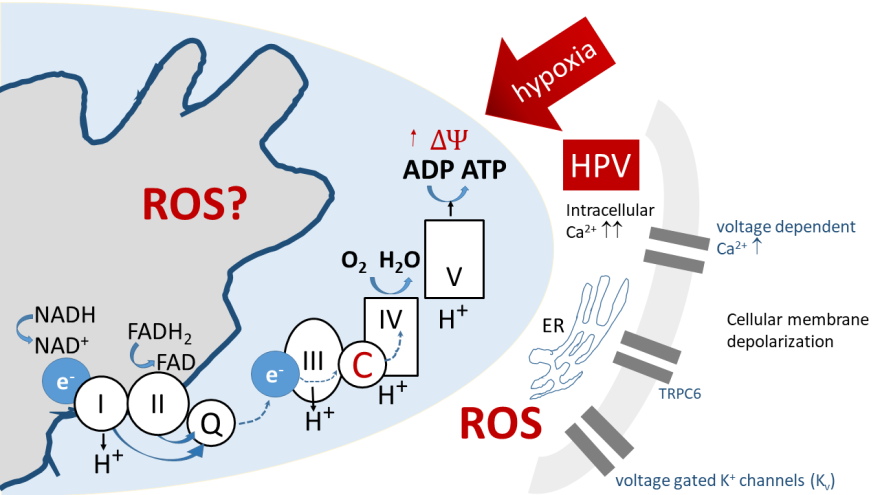 PASMCs are the key sensor and effector cells underlying hypoxia-induced pulmonary hypertension and other forms of PH [4]. They are located in the wall of precapillary lung vessels and have the ability to sense acute oxygen shortage in the lung’s alveoli. Under these circumstances, they immediately constrict (HPV) which tightens the lung vessels - thereby redirecting the blood flow to areas of higher oxygen content. HPV is unique for the pulmonary circulation and is essential to maintain arterial oxygenation. The oxygen sensing and signaling mechanisms underlying HPV are hitherto not entirely clarified. Under acute HPV - that generally lasts for seconds to minutes – HPV seems largely to depend on release of reactive oxygen species (ROS) mediated by different signaling cascades, crucially involving mitochondrial redox reactions [8]. The multifactorial nature of HPV, depicted in Fig. 1, is believed to have several hypoxia-sensitive components contributing to HPV [4, 9]. In contrast, chronic hypoxic pulmonary responses that last for several minutes to hours operate by distinct mechanisms.

Microfluidic system
Since HPV is triggered by oxygen deprivation, an experimental setup must include a system that enables control over rapid shifts in oxygen concentration in the vicinity of PASMCs. We have designed a gas-tight microfluidic system, see Fig. 2a. The design supports multimodal measurements with the Patch Clamp technique and optical probing, while tracking the oxygen concentration [10]. A perfusion system delivers a constant flow of nutrients in biological buffers to the sample in the chamber. Further, the perfusion system can create seamless shifts between normoxic and hypoxic solutions - resulting in a step response due to shifts in oxygen availability. The design of the system was supported by simulations of the chamber, Fig. 2b. It was also crucial to determine that the patch pipette channel would not overflow, because it would render measurements impossible. The simulations revealed that the fluid buildup in the patch pipette channel was low while maintaining a constant flow in the chamber, Fig 2c. The simulation of the fluidic system was done in ANSYS in collaboration with Fluid Mechanics at LTU.

Patch Clamp
The Patch Clamp technique is an electrophysiological method used to measure the activity of ion channels in the cell membrane [11]. Cells use ion channels in order to communicate with their surroundings or to fuel biochemical reactions. PASMCs respond to oxygen deprivation by creating an inflow of calcium ions through the membrane, which binds to the protein calmodulin. By attaching a pipette to the membrane of a PASMC, changes in ionic concentration can be detected through potential differences and the dynamics of the ion channels can be traced. An overview of a patch pipette that is forming a seal with the membrane of a PASMC, can be seen in Fig. 3.

Fig. 3) Patch pipette as it forms a seal with the membrane of a pulmonary arterial smooth muscle cell (PASMC), to probe the dynamics of the ion channels. (Courtesy of our collaborators at Justus Liebig University.)

Raman spectroscopy
Raman spectroscopy is a label free spectroscopic tool that gives information on the molecular vibrations of a sample. A Raman spectrum is unique for any given molecule; it shows the energy difference (in inverse centimeters) between incoming excitation photons and the inelastically Raman scattered photons. Raman spectroscopy is extremely sensitive and informative regarding type, state, ordering, and abundance of molecules in a sample. Raman spectroscopy has been widely used to study the redox state of the mitochondria, the power station of all living systems [12-15]. A schematic of the multimodal setup can be seen in Fig. 4. 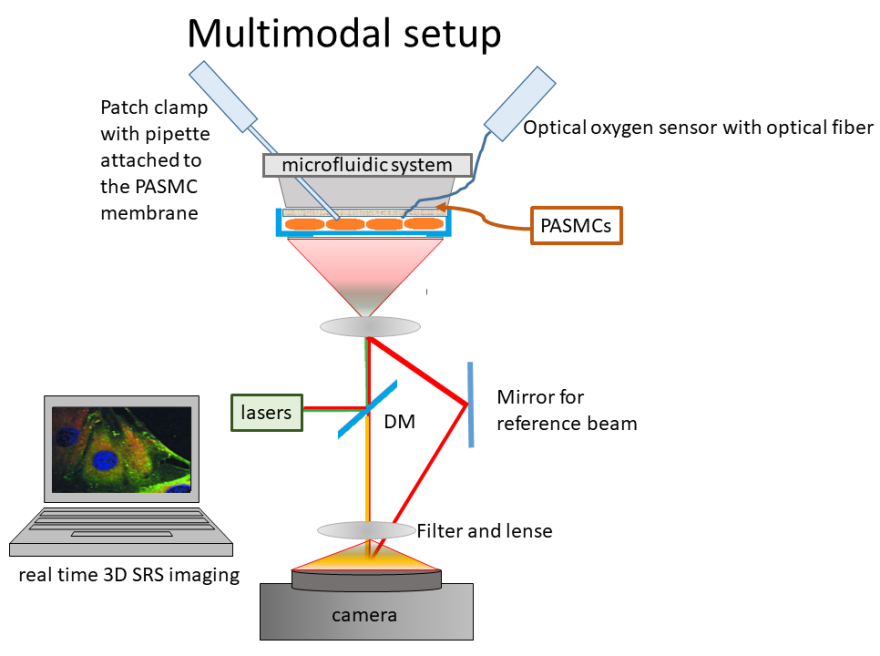 Fig. 4) A schematic of the multimodal setup. The patch clamp pipette and the oxygen sensor are inserted into the microfluidic system through a designed channel system. Raman spectroscopy, excited by a green laser (Wavelength 532nm, DPPS, Altechna, purchased from Azpect Photonics, Solna Sweden) is recorded by a Raman spectromter (Shamrock3031, Andor Technology, Belfast, UK) and the vasoconstriction of the cells is recorded using a LED light and a camera.

The results have been published, check the references by scrolling down to publications at https://www.ltu.se/staff/r/ramser-1.13062?l=en

Acknowledgement
We would like to thank our partners at the Justus Liebig University, Giessen, Germany. Special thanks go th Dr. rer. nat. Fenja Knöpp and Prof. Dr. Norbert Weissmann who are a great access to the project. We would also like to thank Dr. Anders Andersson at Fluids Mechanics, LTU for the simulations on the microfluidic system. For financial support we would like to thank the Swedish research council (Grant 2016-04220), as well as the Kempe Foundation and LTU Labbfond.