A schematic of the optical principle of InFeRa is shown in Fig. 1. 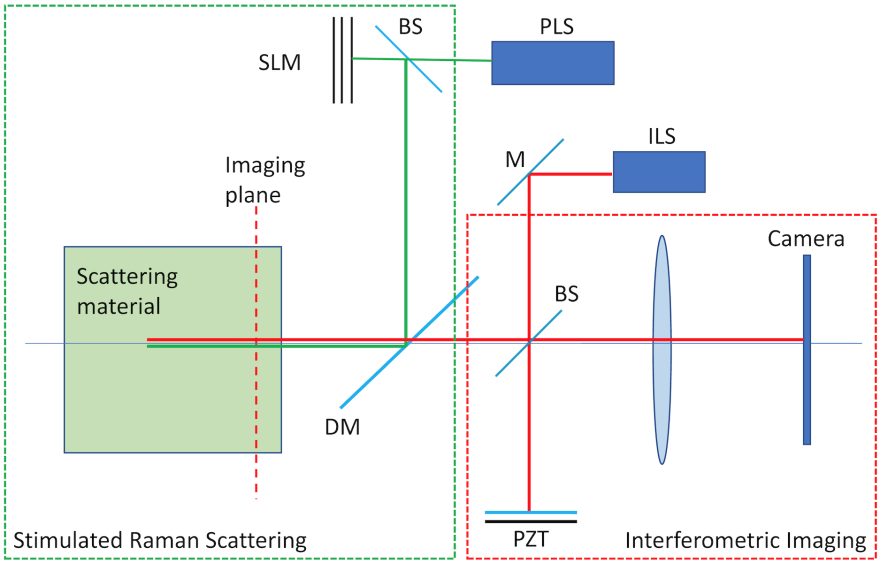 In this project, the system will be tested on bioelectrochemical systems (BESs): BESs use microbes to catalyze different electrochemical reactions for diverse purposes. Experiments on BES of the bacterium Geobacter sulfurreducens have been performed to investigate direct electron transfer between the cathode and the bacteria. This research is in collaboration with Biochemical Process Engineering at the Department of Civil, Environmental and Natural Resources Engineering, see:

The Raman lines of cytochrome c, an electron donor protein, have been identified [1,2]. Control and characterization of 3D biofilm formation and the action of mitochondrial biomarkers will finally be performed by InFeRa.

Currently (spring 2021) we are working separately on the development of interferometric imaging and stimulated Raman scattering (SRS) combined with a spatial light modulator (SLM). Upcoming sections contains preliminary results of both parts.

The interferometric imaging part of InFeRa is depicted by the dashed red square in Fig. 1.  Fig. 2 shows a prototype setup that applies a rotating diffusor to the emitted light of an He-Ne laser, to generate an incoherent light source. Fig. 3 shows the effects of depth-gating, by having correlated the speckle pattern in the reference arm with that of the object arm at varying optical path differences. Fig. 4 shows an example of image reconstruction using phase shifting. 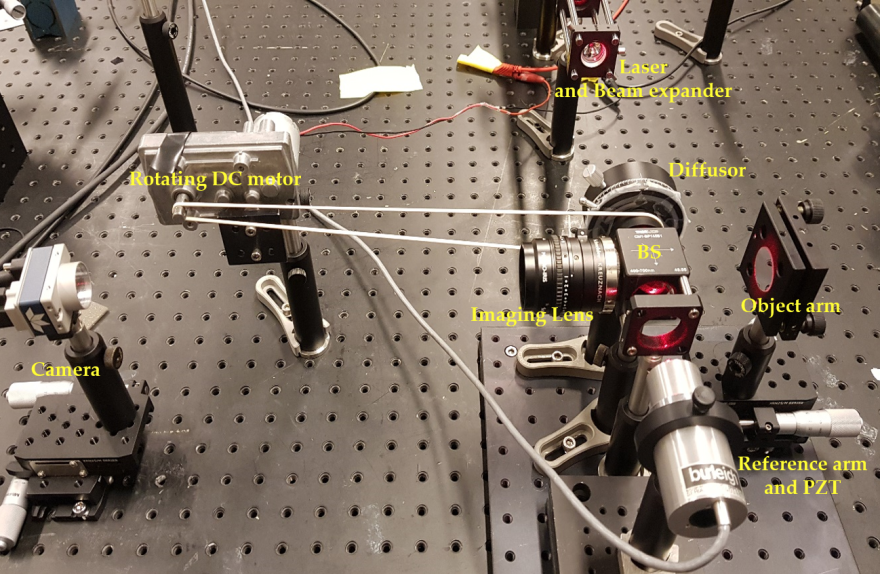 Fig. 2) Prototype of coherence gated interferometry system. A rotating diffusor was used to shorten the coherence length of the incoming light from a He-Ne laser. The object was imaged (magnification = 2.5) through a Michelson-interferometric scheme using an objective (Component-S 5.6/100, Schneider Kreuznach, Germany) and a digital camera (Genie Nano M2420, Teledyne Dalsa, Canada). One of the arms of the interferometer was attached to a piezo-electric element that enabled image reconstruction through phase-shifting (Component-S 5.6/100, Schneider Kreuznach, Germany). 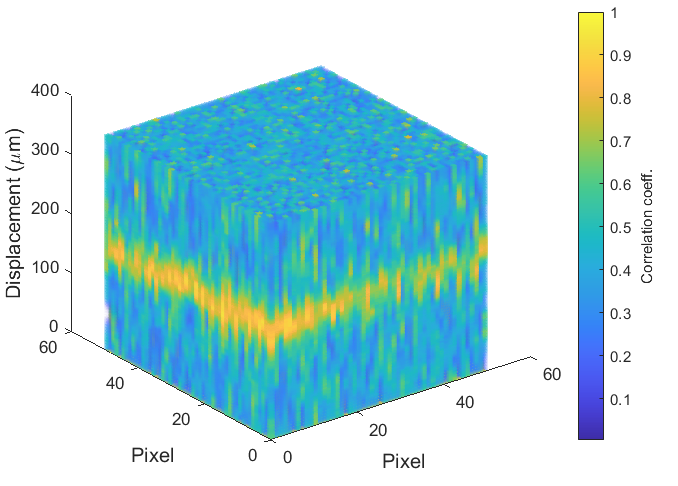 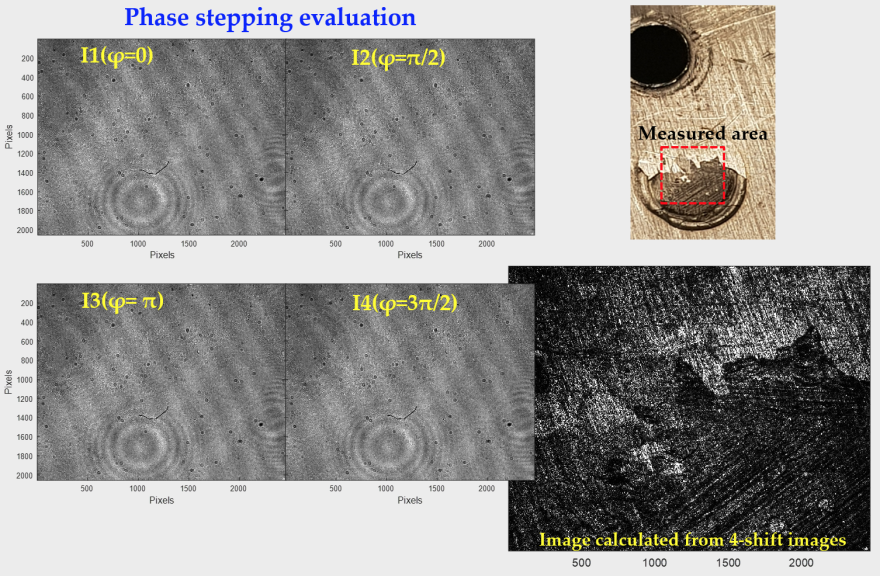 The SRS process will only take place if two beams overlap in a material that has a Raman shift equal to the difference in wavelength of the two beams. In Fig. 5 a sketch of the current experimental setup is seen. The CH2 asymmetric stretching ethanol Raman band at 2934cm -1 is investigated. This part is included in the dashed green square of Fig. 1 that shows a prototype of the InFeRa setup. Fig. 6 illustrates how the SLM can be used to probe the sample at different locations in the glass cuvette and Fig. 7 shows the results obtained by imaging the SRS signal due to such motion. 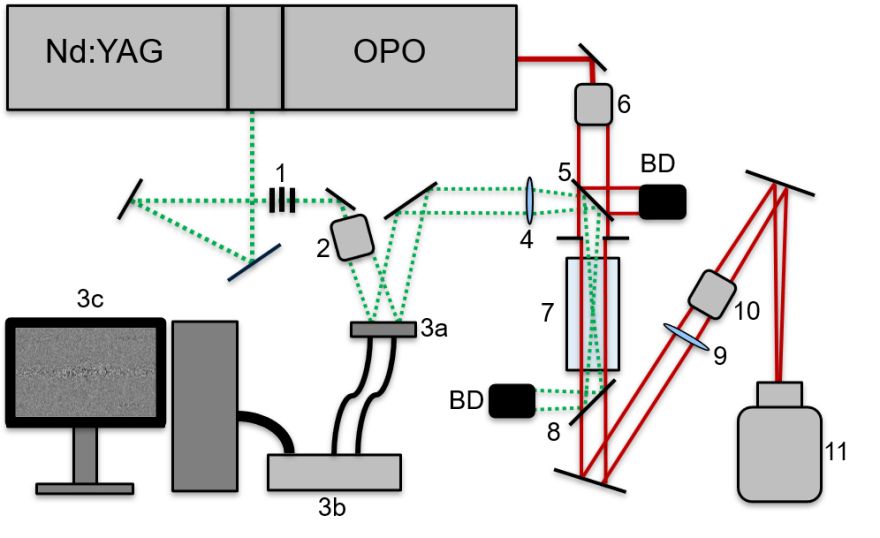 Fig. 5) A schematic of the optical system. A Q-switched 1064nm Nd:YAG (Continuum PL 8000) was used to produce both the pump and Stokes beam. The frequency doubled532nm pump beam (green dotted lines) was guided through a rotator and two thin film polarizers (1) for seamless control of the light intensity. The pump light was expanded 3x by a Galilean telescope (2) to cover the active area of the SLM head 3a) (Hamamatzu X10468-04 LCOS-SLM). The SLM was connected to a control module, (3b), coupled to a computer (3c). The phase modulated light was focused into the sample with a 250mm lens (4). The frequency tripled 355nm Stokes light was guided into an OPO system (Continuum Sunlite EX OPO) and tuned to 630.45nm. The Stokes beam was expended 16x by a Galilean telescope (6) to then pass through a beam splitter (5) to a glass cuvette (35×70×180mm3) containing 99.7% ethanol (Solveco AB, Rosberg, Sweden) (7). The overlap of the beams in the sample generated a SRS signal that was guided through a 250mm lens (9) towards a PCO edge camera (11). To remove the pump light from the signal image a 532nm mirror (8) and two edge filters (10) were used. In front of the camera a neutral density filter OD 2.0, a RG 630 filter and a BG39 filter were mounted to improve the signal to noise ratio.

In the near future (fall 2021) the two imaging parts will be combined. First measurements will be carried out on polymer beads on a glass surface. After that, first experiments on BES will be performed.

This project is financially supported by the Swedish Foundation for Strategic Research (ITM17-0056) the Kempe Foundation and LTUs lab fund.

[2]: Krige, A., et al., A New Approach for Evaluating Electron Transfer Dynamics by Using In Situ Resonance Raman Microscopy and Chronoamperometry in Conjunction with a Dynamic Model. Applied and Environmental Microbiology, 2020. 86(20).