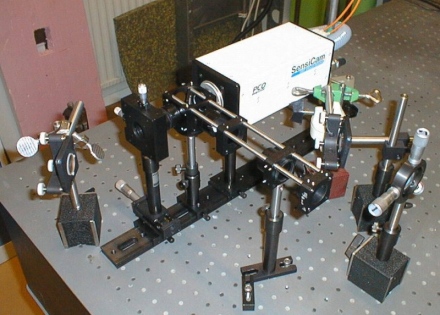 The most used CCD camera is a PCO Sensicam double shutter with a detector containing 1024 x 1280 pixels of size 6.7 x 6.7 microns. The figure shows a photo of the camera and optics for pulsed TV holography. The detector is Peltier cooled to -12 ° C and the dynamic range is 12 bits, Which Enables the camera to be used at quite low light levels. The camera is controlled from a computer via a fiber optic cable, Which is insensitive to electromagnetic transients. The camera is externally triggered and two images can be captured with minimum 200 ns time separation. The exposure time for the first image is controlled by the user via the trigger signal duration and the second is set by the read out time for the first (125 ms). If the laboratory is kept dark however, the exposure of the CCD detector will be due to the laser pulses only. Four double images per second can be recorded at full resolution. The camera can be Synchronised to a pulsed laser and properly triggered by a Stanford digital delay generator. We have three PCO cameras.