In this project we develop a label free technique based on three dimensional (3D) holographic and microscopic stimulated Raman scattering (microSRS) combined with microfluidics. The goal is to measure and to understand the functioning of pulmonary arteries during oxygen shortage and to learn more about the biomolecular and mechanical actions of pulmonary soft muscle cells (PASMCs) during hypoxic pulmonary vasoconstriction (HPV) and pulmonary arterial hypertension (PH).

The transport of oxygen through the lungs into our blood flow is vital for our functioning. Evolution has created a fascinating backup system to maintain ventilation under acute oxygen shortage. Acute oxygen shortage in the alveoli of the lung leads to hypoxic pulmonary vasoconstriction (HPV) with the PASMCs as the effector cells. These cells immediately start to constrict upon hypoxia, see fig.1, which redirects the blood flow to areas of higher oxygen content which is essential to optimize and maintain gas exchange under conditions of regional alveolar hypoxia. Such conditions already occur in healthy people but can be life threatening if HPV is disturbed by pneumonia, sepsis, during anesthesia, or liver failure [1].

Fig. 1) Left side, a healthy artery and a relaxed PASMC. The flow of blood and oxygen is unhindered and the right ventricle is in a normal state. To the right, hypoxia generates a signaling cascade in the mitochondria of the PASMC, which leads to increased pulmonary vascular resistance caused by vasoconstriction as well as vascular remodeling, with a subsequent increase in right ventricular heart afterload, right ventricular hypertrophy and the risk of right heart failure.

We are developing three dimensional (3D) holographic and microscopic stimulated Raman scattering (microSRS) combined with microfluidics. The system has prospects of rapid, simultaneous identification and analysis of the biomolecular signaling and mechanical events in PACSMs under oxygen shortage. Holographic microSRS will hopefully provide new insights and lead to new therapeutic agents against Pulmonary Hypertension.

First results of the SRS setup in the transmission mode

First SRS holograms have been recorded and phase images have been retrieved in the transmission mode [2]. A schematic of the setup, with experimental conditions for cod liver oil, can be seen in fig. 2. 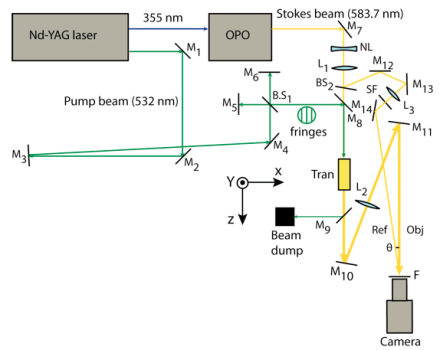 The SRS system was built up in the John Fields laboratory at LTU. First results show that the setup based on spatial modulation produces a reliable stimulated Raman gain in cod liver oil with only one laser pulse per image, see fig. 3. To retrieve the SRS signal, one image of the pump beam (fig. 3a) and two images of the Stokes beam without (fig. 3b) and with (fig. 3c) the pump beam fringes present were recorded. The normalized image was calculated and Fourier transformed (fig. 3d). Then, the gain of the Stokes beam was separated from the background in the Fourier domain (fig. 3e).

As can be seen in fig.3f, the SRS gain in cod liver oil does not seem to follow a theoretically expected linear trend of a signal enhancement. This leads us to the suggestion that a thermal convection caused by prolonged laser irradiation affected the sample. This was confirmed by recording a time series of phase images during one minute; the phase map revealed an increased thermal convection in the cod liver oil, see fig. 4. The thermal effect will be further investigated on the PASMCs; however, the integration time will be much shorter and may have less impact. 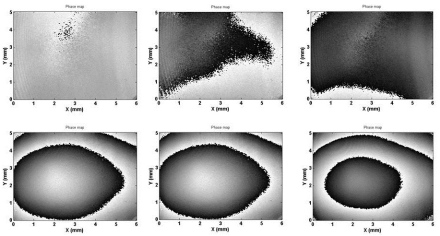 The results show that the movement and the molecular content can be imaged simultaneously.

The experiments were carried out at the Excellence Cluster Cardio-Pulmonary Systems (ECCPS) at the Justus Liebig University in Giessen, Germany. PASMCs from mice were grown in vessels that are suitable for microscopic investigations, see left hand side of fig. 5. After incubation, the vessel was put onto a homebuilt microscope that was fiber-optically coupled to a Raman spectrometer. The solution was heated to 37°C to create physiological conditions, see fig. 5, right hand side. Measurements were carried out with a perfusion system that could change between normoxic (21% O2) and hypoxic (4% O2) conditions.

The integration time was set to 10 s and the excitation wavelength was 532 nm.  First, a spectrum in the normoxic condition was taken, thereafter; the normoxic buffer solution was switched to deoxygenated buffer solution while Raman spectra were taken continuously. After four minutes the oxygen solution reached a value of 4%, which was considered hypoxic, and the buffer solution was changed to normoxic again. After four more minutes, the recovered state was reached and the experiment was stopped. Fig. 6 show the mean(n=6) of the first spectra, the hypoxic spectra after 4 minutes and after 8 minutes (recovered state). The difference spectra show the first spectrum minus the spectrum after 4 or 8 minutes respectively to investigate the spectral changes over time. 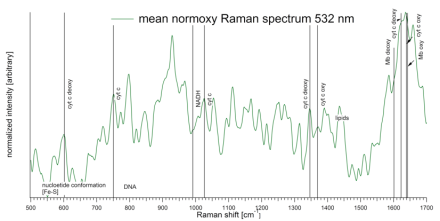 From the data it can be seen that the 532nm excitation line lies in resonance with the heme-proteins but also the nucleotide conformations and Fe-S bindings can be seen. Band assignments are according to ref [3,4].

The time course of the spectral measurement series are shown in fig. 7, left hand side. To the right hand side the box plots of the deoxy values from myoglobin at 1608 cm-1 and cytochrome c at 1622  cm-1 are shown. 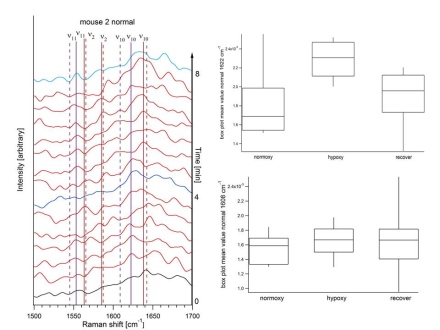 Fig 7) Left hand side; Time series of the 3 experimental procedures. The first so called normoxic spectrum is the undermost spectrum showed in black, the so called mixed spectra are in red and the hypoxic spectrum is blue. The spectrum from the recover state is depicted in a lighter blue. The lines show the Raman lines for myoglobin (Mb) in dotted lines and for cytochrome c (cyt c) in straight lines. Deoxy value lines are blue and normoxy value lines are red. Right hand side, below box plot for the values of reduced Mb at 1608 cm-1and above, box plot for the reduced cyt c at 1622 cm-1.

Regarding the time series, after the first spectrum and after the change of buffer solution, an immediate change from the oxygenated line at 1638 cm-1 (cyt c)  and 1642 cm-1 (Mb) can be seen, while the deoxy line at 1622 (cyt c) and 1608 cm-1 (Mb) rises. When the normoxic solution was turned on again, the deoxy state went back to the oxygenated state. In the box plots it can be seen that the value of reduced Mb showed a slight increase while the value of reduced cyt c showed a very pronounced increase during hypoxia. In the recovery state the value of cyt c almost returned to the initial value.

The project has received VR funding. The experiments are ongoing and the final goal is to take holographic stimulated Raman spectra of the PASMCs at the EPPC in Giessen, Germany.

3.              Almohammedi, A., et al., Spectroscopic analysis of myoglobin and cytochrome c dynamics in isolated cardiomyocytes during hypoxia and reoxygenation. Journal of the Royal Society Interface, 2015. 12(105).