Acoustic holography deals with a typical inverse problem, to obtain the unknown from something that is known. From measurements of sound, most often using microphone arrays, reconstructions of the sound field are made in an attempt to find out what causes the sound. The successfulness of such analyses is highly dependent on the quality of the reconstructed images, where factors like noise and spatial resolution are of importance. Also, when using microphones for measurements of the sound it is inevitable that the sound field is disturbed. Such disturbances will always have an impact on the reconstructions, even though in most cases the effects are negligible.

In this project the possibility of using a laser vibrometer for sound measurements was tested. Since it is an optical method it has the great advantage of allowing the sound to be measured without being disturbed. The measurement data then serves as input data for digital reconstructions of the sound field. The method for the imaging and localization of sound sources developed here is a multi-wavelength method based on digital holography. The sound field is measured and reconstructed for several wavelengths of the sound. These reconstructions can then be combined and used to calculate a filter which improves the spatial resolutions and makes it possible to perform a selective imaging of the sound sources.

In the figure below an example of 3D selective imaging is shown. In the experiment the sound field from three ultrasound transducers, where two were of the same type, was measured in a plane above the transducers. In the reconstructed image all three transducers can be seen and it is clear that the transducer in the middle is of a different type than the other two. 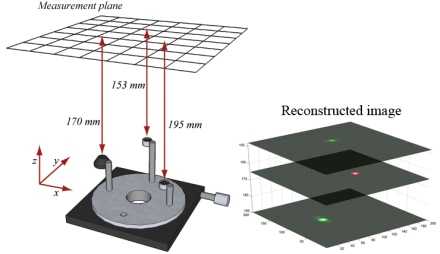