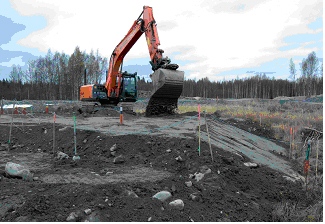 Construction of the sulphide and is associated with challenges. Sulphide soil generally have low carrying capacity and are very prone touchdown. The foundations, groundwater and engineering aimed at, environmental and / or cost reasons, as a rule to use sulphide on site instead of the excavation. In Sweden there sulphide soils mainly in a wide swath along the coast of northern Sweden. From Gävle in the south to Haparanda in the north. That is, in areas where the infrastructure is now being expanded.

Today, the industry lacks the tools to predict subsidence including long-term subsidence of sulphide with reasonable reliability. Subsidence caused by a plant / building normally deviate significantly from the a priori expected. For the most part are compositions greater than expected, but sometimes less.

The objectives of this project is to:

SGI has been under research project built two test embankments on SGI's new sample box of lights outside Kalix next new railway Haparandabanan. The work has been performed in collaboration with the Transport Administration (Haparandabanan) and Luleå University of Technology. The purpose of constructing test beds is that under carefully controlled conditions, ie with fully instrumented embankments and the foundation soil, for a long time studying subsidence including creeping subsidence sulphide.