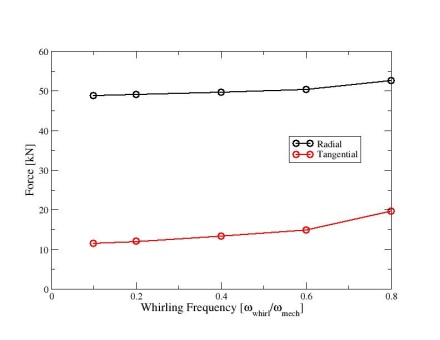 Another problem is that the operating conditions for hydro power units have been changed from the ones that the machine was originally designed. Today hydro power units are used for “peak loads” with a large number of start-ups and shut-downs. This will significantly affect the lifespan of the machines. The machines are in general old and large revisions are performed during the coming years. This implies that new components with new materials and design will be installed to the old machines. To reduce the risk for failures it is essential that better methods for electromechanical and rotor-dynamical simulations are developed.

The occurrence and the effect of electromagnetic forces in electrical machines have been discussed for more than one hundred years. These forces are important in hydro power applications where the relative air gap is small and the asymmetries can be relatively large. Measurements indicates that all hydro power generators, i.e. usually large salient-pole synchronous generators, are associated with some degree of asymmetry in the air-gap. Usually, it is about 0.2% of the stator radius. These asymmetries distort the air-gap flux density distribution, producing an attraction force between the rotor and the stator, called unbalanced magnetic pull (UMP). The dynamic consequences of the UMP can be dangerous to the machine. There are documented cases, e.g. Talas and Toom [1], where the rotor has been in contact with the stator due to air-gap asymmetry. The simplest case of asymmetry in the air-gap is referred to as eccentricity. This is when the generator axis does not coincide with the centre of the stator. Two kinds of frequently studied eccentricities are; static eccentricity, which means that the rotor rotates at an equilibrium point which does not coincide with the centre of the stator, and; dynamic eccentricity, the rotor centre follows an arbitrary trajectory. Due to unbalance, the later are often assumed to be simple synchronous whirling motion, i.e. a circular or elliptic limit cycle with a periodicity equal to the driving frequency.


A literature survey indicates that methods of calculating the UMP caused by eccentricity, as well as the vibration characteristics of a rotor system due to the UMP is still a topic of intensive research. Early papers, such as Behrend [2] and Robinson [3], suggested linear equations to calculate the magnetic pull for an eccentricity up to 10% of the average air-gap. Covo [4] and Ohishi et al. [5] improved the equations for calculating the magnetic pull by considering the effect of saturation on the magnetization curve. Some other examples of important analytical developments can be found in [6-19]. Finite element analysis technique can today provide solutions to the UMP problem, see e. g. Debortoli et al. [10] and Arkkio [11]. In Arkkio’s group in Finland several important studies coupled to rotor dynamics has been performed. Holopainen et al. [15] studied the rotor dynamic effects of electromechanical interaction on induction motors and Burakov and Arkkio [16,17] showed that the damping winding affects the UMP a lot depending on the whirling of the rotor in salient-pole synchronous machines. For more details an overview of the research in the area of modelling and calculating UMP in electrical machines was presented by Frosini and Pennacchi [20]. In hydro power applications Uppsala and LTU have significantly contributed to the development of models on the electro-mechanical interaction [21-30, 33-35, 37-39]. The interest from the research community is quite large, but still (because of technical difficulties) only fiew groups are studying large synchronous generators with many poles.However, a group in Switzerland collaborating with a large Hydropower company recently announced their interest in the problem [36].

In Sweden the electromagnetic forces have been studied in cooperative research projects between the rotor dynamical group in Luleå and the electricity group in Uppsala since 2001. The long term aim of the rotordynamic research is to develop models of the system from the fluid interaction with the rotor to the electric grid. From these models it will be possible to evaluate forces and vibrations of all parts of the system due to different operating conditions. By optimisation the operating conditions on individual machines, one can increase the reliability and optimise the maintenance. In this aim the electro-mechanical interaction in the generator plays a crucial role. Without a good understanding on the electromagnetic forces the dynamics and stresses on the rotor can not be predicted. Thereby the reliability and need for maintenance is unsure especially if the operating conditions are changed. On short terms we have developed methods and tools for the electro-mechanical interaction which already can be used to understand and avoid failures in generators.
The electro-mechanical research was initiated by Rolf Gustavsson (Vattenfall AB) and continued 2003 with the two Elektra project (3639 and 3640). The work has so far resulted in four licentiate theses. Today only Rolf Gustavsson and Martin Karlsson (Elektra 36010, the continuation of 3640) are working fulltime in the research projects and it is expected that they will finish their PhD within one year. Ludvig Lundström is today employed by a company in the medical industry, Rikard Peres is employed by ABB Automation Technologies AB and Niklas Lundström decided to focus on mathematics and is today PhD student at Umeå University. The success of Rolf Gustavsson’s research has resulted in two new industrial graduate students at Vattenfall AB, Mattias Lundström on rotor dynamics and one new on electro-mechanics. In these earlier projects we made several mistakes which may have contributed to the graduate student’s decisions to take other works after the licentiate thesis. The aim was too high in the first project and the need of team building and supervision was underestimated. But we have learned from these mistakes and have today a developed the numerical tools. By the finance from SVC we have a possibility to supervise and work closer with our graduate students today. The drop-out to the industry is also not only negative since it indicates that there is a great industrial need of the competence we are developing. The Scientific output of the Elektra projects is however high with six journal papers  [23,24,26,29,37,38] and four reviewed conference papers [25,27,28,39]. This indicates that there is a scientific and industrial interest in the research performed in this field. In addition to the work by the Ph.D-students in the projects, there have also been two master theses written within the projects [40, 41].  One licentiate thesis [42] within the projects was awarded with “Vattenfalls pris för bästa licentiatavhandling 2006 vid Luleå tekniska universitet”. The cooperation between Uppsala and Luleå has also resulted in two appointed expert positions in SVC (the Swedish hydro power center). Jan Olov Aidanpää is appointed as rotor dynamic expert and Urban Lundin as generator expert. We are also writing on an EU FP7 project on hydro power technology and we have submitted an application to develop a Nordic network in rotating machinery (www.ltu.se/nnrm). The projects have also resulted in an EU financed project where Porjus U9 will be fully instrumented and used for research for several years to come. We are also applying for a rotor dynamic test rig in Älvkarleby (VRD). Both facilities will be available for us in different research projects and thereby our possibility to evaluate new models will increase.

Gained results so far in the electromagnetic interaction with rotors
-    Electro-mechanical modelling of static eccentricity and stability analysis [21-23]
-    Influence of shape deviations of generator rotor and stator [24-26]
-    Characterisation of rotors by electro-mechanical loads [27]
-    Electro-mechanical modelling of active and reactive load [28,29,37]
-    Influence of fluid-rotor interaction in hydro power turbines.[25 and another paper is under preparation]
-    A novel method for modelling non-uniform rotor/stator configurations [under preparation]

In this project the electro-mechanical force modelling will be continued to include the damper windings influence under different operating conditions. This question was addressed in the earlier Elektra projects but it was found that it was not easy to implement into the electrical finite element code. A great deal of development has taken place, so several static problems have been solved, and now we are looking into the much harder dynamical problems. This project is suggested to run with two PhD students one at LTU and one at UU. The first focus will be analysis of the damping windings influence on the forces at different whirling frequencies. In Figure 1 an example of results from electromagnetic simulations are shown for a simple 4 pole-pair electric motor. In hydro power generators the numbers of poles are normally much higher and the generator design is more complex. Therefore the numerical problems are much more complicated when hydro power generators are considered. In the figure one can observe the radial and tangential forces as function of whirling frequency. With this kind of information the dynamics can be evaluated in detail and the information will influence the design of generators. The stability analysis will also be significantly improved and therefore more reliable generators can be made in the future. In Figure 2 some preliminary results are shown from simulations of a hydro power generator in Uppsala. This indicates that we have solved the earlier problems and we are now ready to continue the developments of electromechanical models.