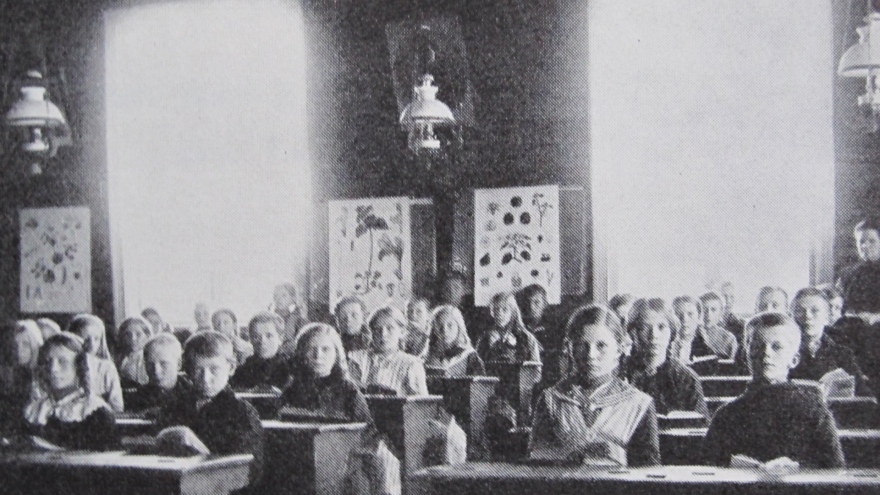 Stefan Aro and Nadia Boussaid Pettersson from the Commission Secretariat spoke about the Commission's mission. Stefan Aro pointed out that Sweden has always been a multicultural country. - In large parts of Norrbotten, different cultures and languages have lived side by side for hundreds of years. 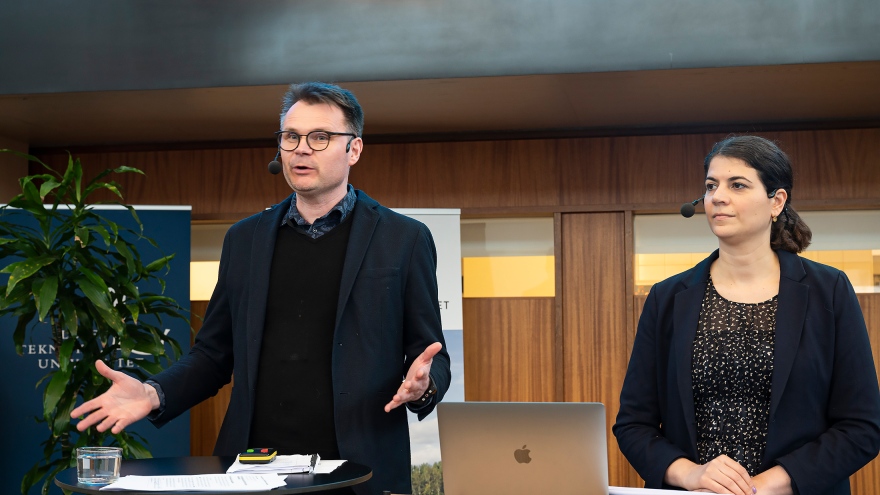 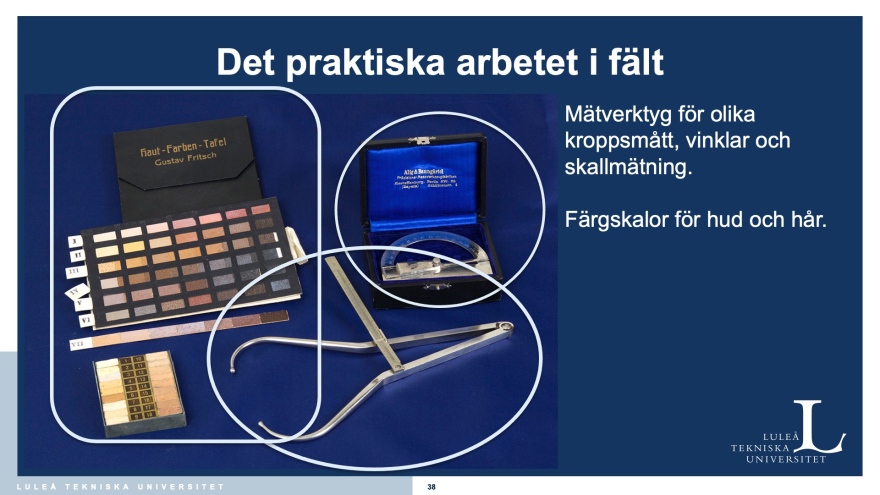 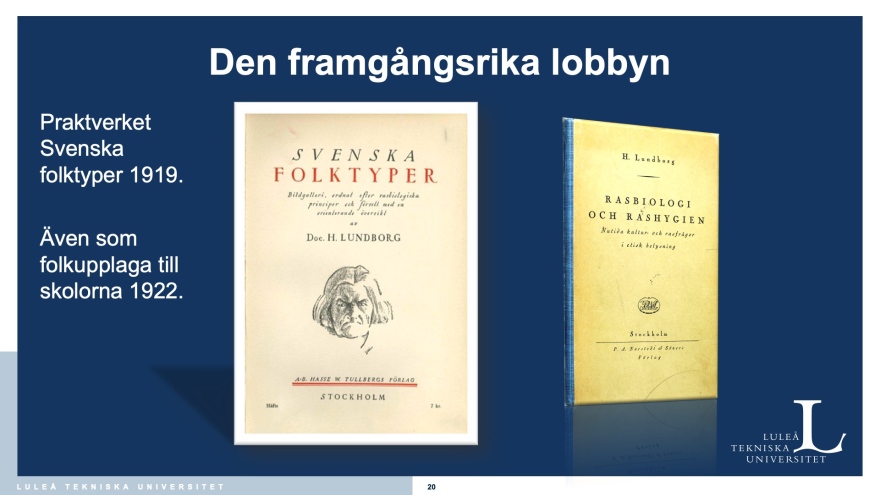 The symposium ended with a panel discussion between Curt Persson, Elisabeth Fura and Lars Elenius. 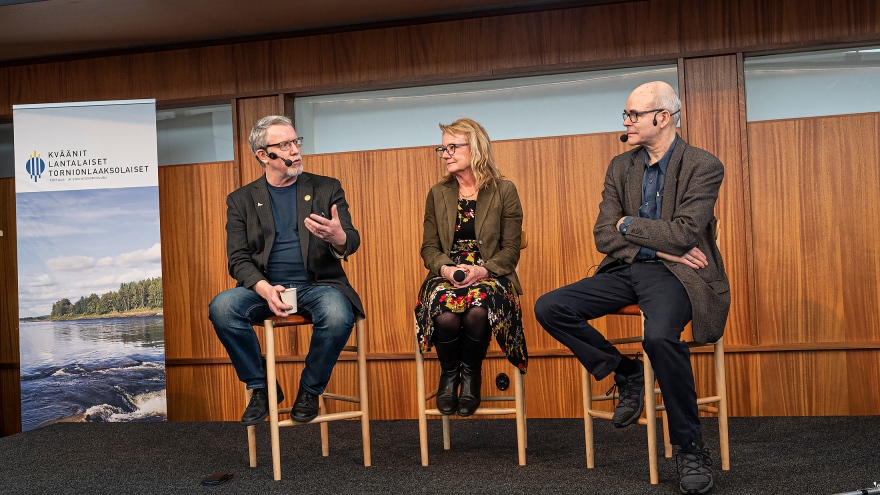 The Commission has been appointed by the Swedish government to investigate violations and abuses against Tornedalians, Kvens and Lantalais as a result of the19th and 20th century assimilation policies. Furhterly, to disseminate information and submit proposals for further efforts that can contribute to restoration and promote reconciliation. The President of the Commission is Elisabeth Fura, former Judge of the European Court of Human Rights and Chief Parliamentary Ombudsman. An interim report will be submitted on 1 June 2022. The assignment in other respects will be reported no later than 15 May 2023.

Lars Elenius, professor emeritus of history at Luleå University of Technology, has studied violations and abuse of Meänkieli-speaking children in school, an important institution in 19th and 20th century Swedishization policy. The starting point for the Swedishization policy in Tornedalen was the 1809 war between Sweden and Russia when Sweden lost the entire eastern half of the country, ie Finland. From now on, the Swedish border ran along the Torne River.

- From that time, Tornedalen has been considered a Swedish problem region, says Lars Elenius.

A military, religious and nationalist problem

The problem from the Swedish state's perspective has been military, religious and nationalist. Initially, Russia posed a military threat, especially from the 1880s Russification of Finland. From Finland's independence in 1917, the new country took over the role of Russia. In the middle of the 19th century, Lars-Levi Laestadius started an intra-church revival movement that gained a particularly strong foothold in the Finnish- and Sami-speaking population in northern Scandinavia. The cross border and licentious characteristics of Laestadianism towards the traditional leaders of the church made it a threat to both the church and the state.

- By introducing the Swedish language in primary school, the Laestadians would be "civilized".

In 1919, the nationalist Västerbotten Committee was formed in Tornedalen, Finland. In the same way that Sweden, in the spirit of the times, argued that Åland should belong to Sweden because the island's population was Swedish-speaking, the Västerbotten Committee argued that Tornedalen and its Finnish-speaking population should go to Finland. Against this background, the cathedral chapter in Luleå diocese was commissioned to secretly investigate on which side of the border the loyalty of the Tornedalians lay.

Meänkieli was punished at school

The school became an important institution for counteracting the perceived threat. In his study, Lars Elenius has interviewed a total of 32 Meänkieli-speaking people who went to school in the years 1935 -1950. Two schools have been surveyed, one on the Finnish border and one inland. At school, it was forbidden to speak Finnish, even during breaks. Anyone who defied the ban and spoke Meänkieli at school could be punished. During the breaks, many people spoke Meänkieli when the teachers did not see. Lars Elenius points out that social class affected the severity of the punishment.

- Social status determined who was disciplined. Here you can see how ethnicity and class interacted.

As a consequence of the Swedishization, many came to despise themselves and their own language. The children were fostered into silence and shyness because they were forced to express themselves in a foreign language. Meänkieli was connected to the feeling of being underclass. Modern society strengthened Swedishization with soft means of power; popular movements, the labour market, government contacts, the mass media and consumption were all dominated by the Swedish language.

Skull shape was associated with intelligence

Curt Persson is associate senior lecturer of history. His lecture was about the background, scope and consequences of Tornedalians, Lantalais and Kvens being subjected to racial biological research.

Carl von Linné  linked characteristics to different human types. From him runs a quasi-scientific thread based on racist prejudices through Swedish history of science. In the beginning of the 19th century, Anders Retzius introduced his so-called skull index, which divided humanity into dolichocephalic and brachycephalic. The shape of the skull was linked to intelligence and other mental qualities.

The son Gustaf Retzius developed his father's ideas. In the years 1897 - 1898, an inventory was carried out on his initiative of the Swedish conscripts to establish a norm for what was called the "pure Nordic race" and thus a measure was obtained for deviations from the norm.

Around the same time, the idea arises that Sweden needs a racial biology institute  to meet the alleged threat to the Swedish race from foreign elements. Lobby associations are formed of which the ”Svenska sällskapet för rashygien” (Swedish Society for Racial Hygiene) and the ”Mendelska sällskapet” (Medelian Society) were the most influential. The associations give open lectures, write debate articles and publish popular science publications. A beauty contest is also organized to appoint the best examples of the Nordic breed. The submitted contributions lay the foundation for the book "Swedish folk types" in 1919, which will be of great importance for the lobbying efforts. Furthermore, contemporary celebrities and public debaters, such as Selma Lagerlöf, Ellen Key and Anders Zorn, are associated with the cause.

- It is important to remember that we can not judge by our standards in the 2020s. We know why things happened. These people didn't, says Curt Persson.

The Institute of Racial Biology is founded

The diligent lobbying work is heard and in 1922, with broad support across the entire political scale in the Riksdag (Swedish Parliment), the Institute of Racial Biology in Uppsala is formed under the leadership of Herman Lundborg – the first state racial biology institute in the world. In the same year, an edited version of "Swedish folk types" is published, the so-called folk edition, which was distributed free of charge in schools and libraries.

The men of the Church played a key role in the inventory of  the population. They had access to church records (kyrkböcker) in which all of the parishioners were registered and evaluated. Primary school teachers and private individuals, often self-employed, with a commitment to the racial issue also contributed with their knowledge of the local population and the trust that common people had in them by virtue of their authority. It was through the care of the local dean Georg Bergfors that the racial biological survey in Upper Norrland begins in Svappavaara and Masugnsbyn.

- Bergfors recommends Herman Lundborg to look at Svappavaara and Magugnsbyn because these villages, in Bergfors' words, have the largest racial mixtures and thus pose the greatest threat

According to Curt Persson, the racial biological investigations led to a culture of silence among Kvens, Tornedalians and Lantalais.

- Those who were measured and photographed never found out why. Their children got to read the folk edition at school and got to see their parents as a threat to the Swedish race. My generation tried to ask their parents but got no answers because the memories were too traumatic.

Curt Persson concluded by asking if we have an obligation to remind ourselves of what has happened in history.