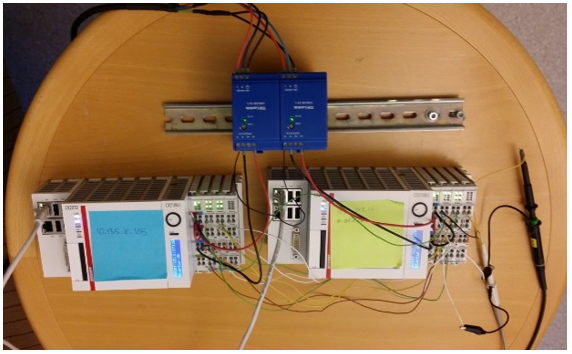 Current trends in the automation of the electrical distribution networks are 1) to increase efficiency of system configuration by utilizing common hardware platform; 2) flexible combinations of functions and equipment. The overall project was aimed at investigating technical feasibility of open execution platform where functions from different vendors can be managed centrally.

Figure 2 shows what was measured with oscilloscope. The focus of the testing is on t1 – the time between PAC1 receiving analogue signal and setting digital output to true; the analogue signal goes through the logic of the function and if conditions are right (<1.5A), protection function sets digital output to true (tripping signal). Time t2 is the time that takes for PAC2 to react on the tripping signal.

Figure 2. Execution trace of the protection function: generated analogue signal and triggered digital output as a reaction. Functions are tested one at a time.

The results were promising, all protection functions have acceptable performance. These results were compared with the same set up where functions were implemented in TwinCAT IEC 61131 languages, and executed on the native environment Beckhoff PAC. The results are satisfactory, both implementations showed similar reaction times.

Research group and software vendor are working together to test functions further and improve the reaction time.

Future work involves testing these functions with NOJA SGA software and their recloser that is compliant with IEC 61499. With three IEC 61499 compliant software tools provided by three different vendors (nxtControl, 4DIAC, NOJA SGA), test the concept where functions can be directly imported to the different tools without exposing their implementation (IP) and affect performance of the protection scheme.