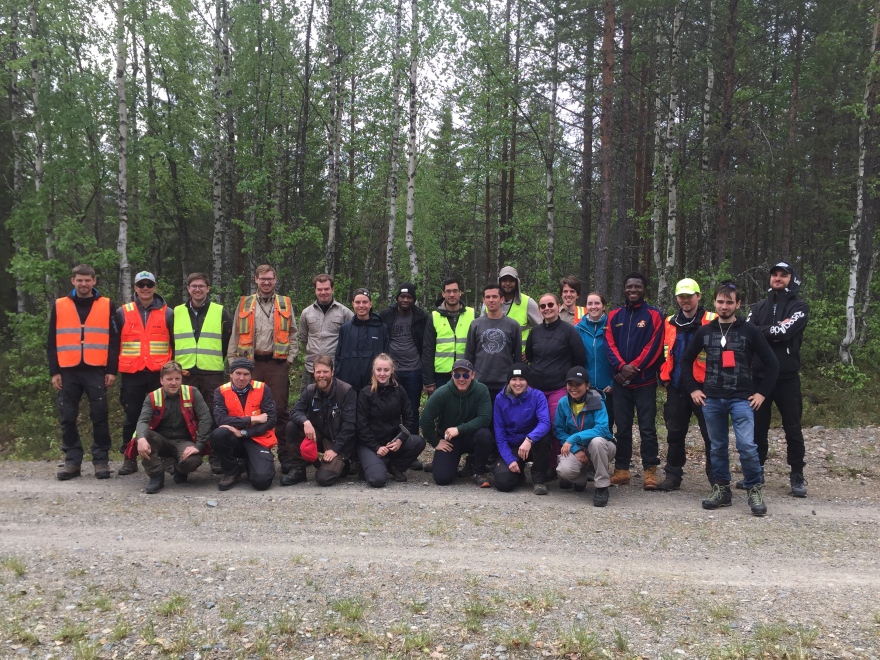 A unique short course in Applied Field Exploration was organized by LTU on 10-14 June, within the EXplORE MSc exchange program in exploration. Visa originalbild , Öppnas i nytt fönster/flik 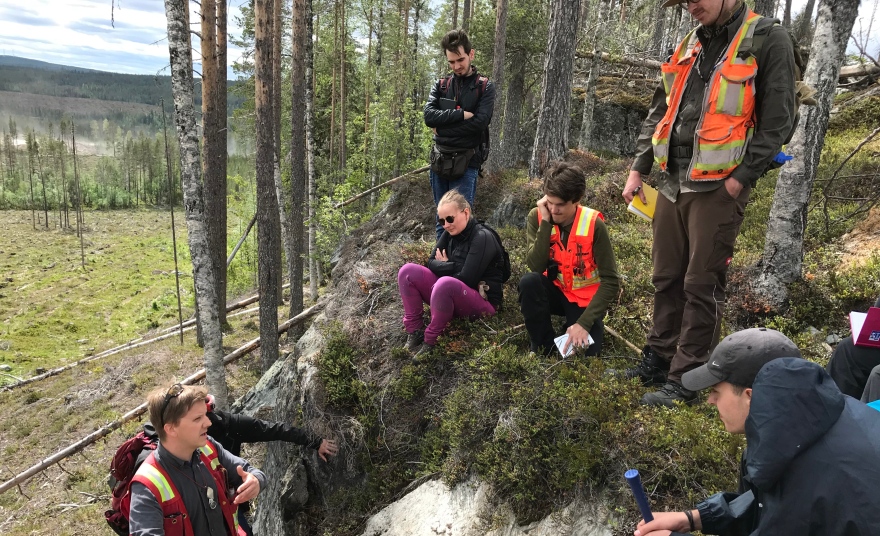 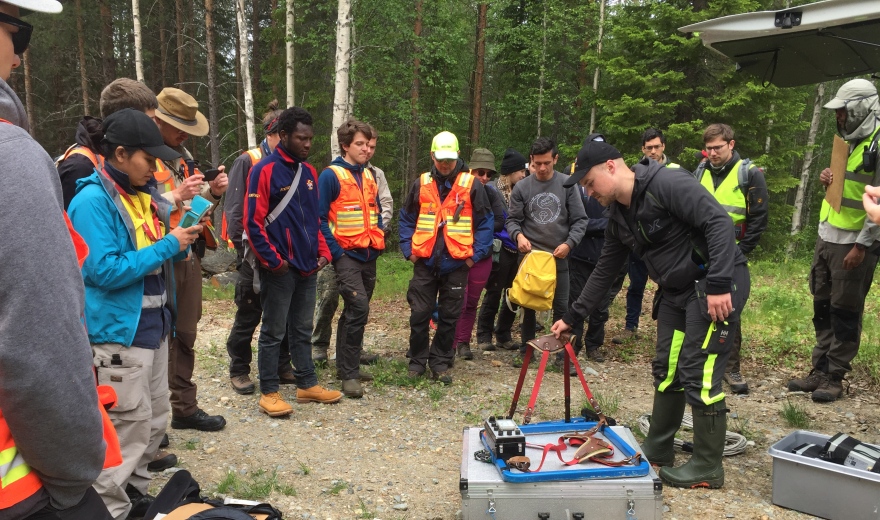 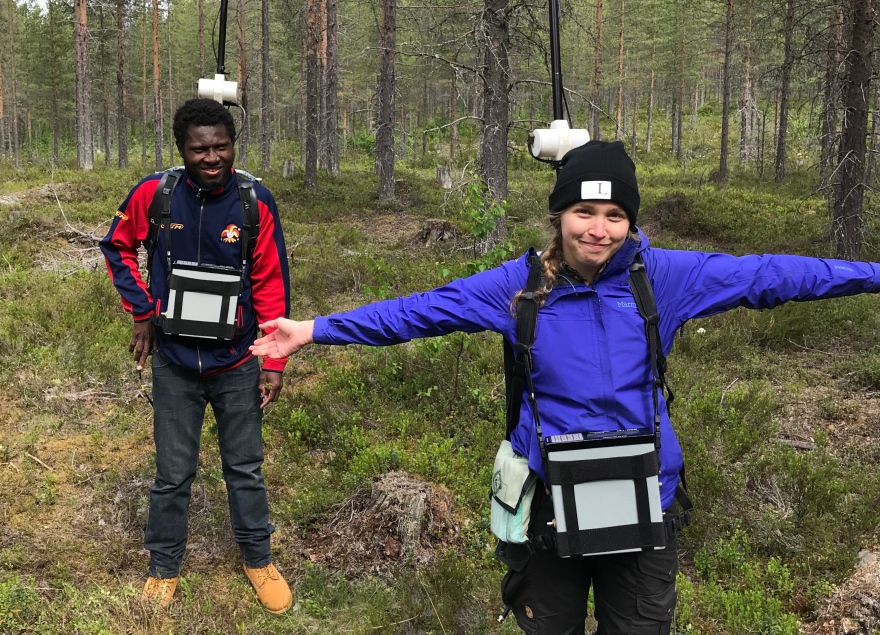 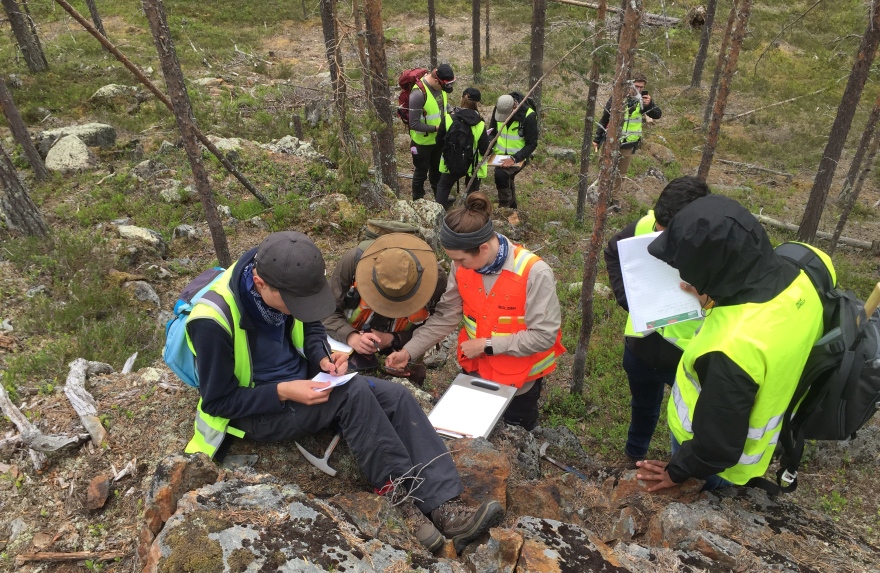 The first half of the course involved detailed field-mapping, focusing on delineation of a VMS target area using structural, stratigraphic and alteration criteria. 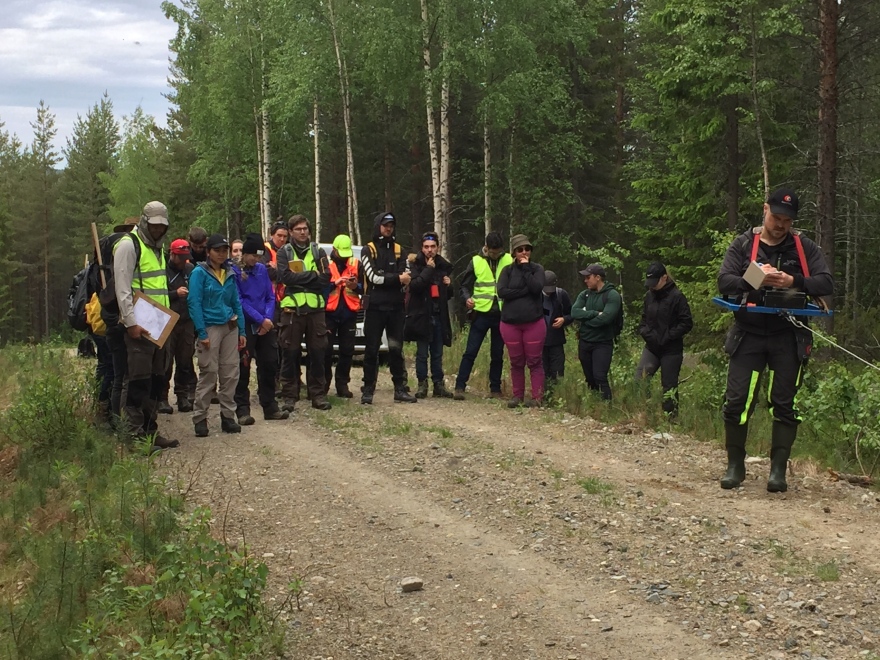 On Thursday, EXplORE project partner GeoVista AB joined the course with a demonstration of geophysical surveying techniques, including classic slingram, ground magnetics and IP resistivity, and the students got the chance to test the equipment. 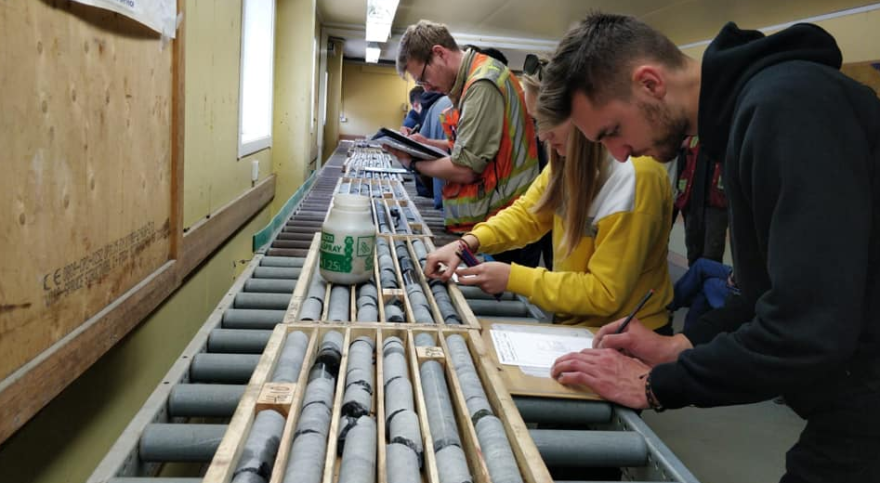 On Friday, we visited the National Drill Core Archive in Malå, where the students were introduced to the graphic logging technique on and old exploration drill core from the study area. Finally, the students synthesized their mapping results into geological maps, followed by a wrap-up discussion on the implications for VMS exploration potential in the area. 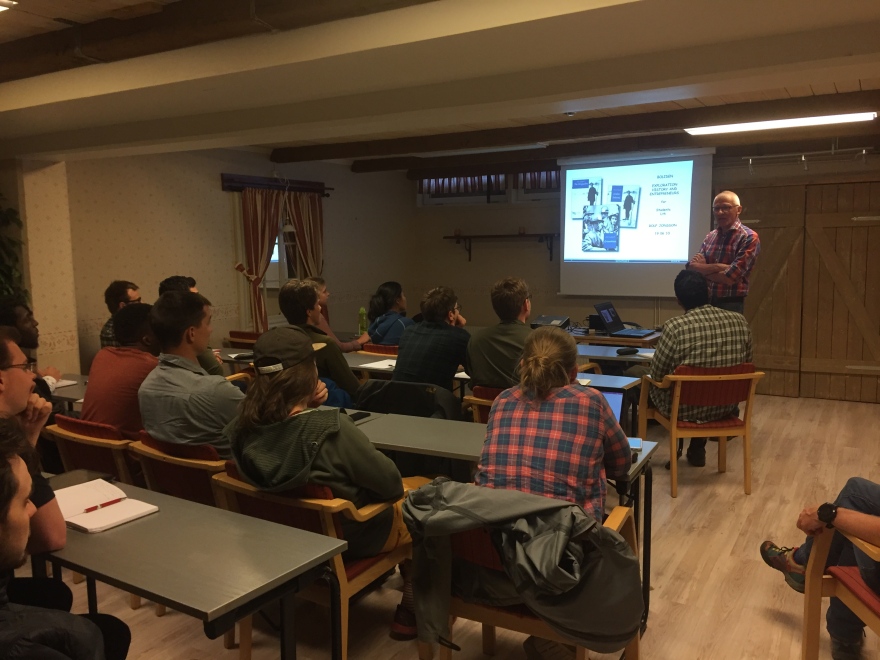 Each day ended with a guest lectures by invited speakers The first speaker was Rolf Jonsson, who worked for Boliden Mineral AB from 1975 until retirement, and who is still active as a consultant for Boliden. Rolf outlined the history of Boliden’s exploration in the Skellefte district. Boliden has a 100 year track-record in innovation when it comes to developing geophysical equipment. However, depletion of easily detectable targets have stimulated an increasing emphasis on conceptual geological models during targeting in the last decades. The integration of the two has been instrumental for many of the more recent discoveries, such as the discovery of new mineralization at Lappberget at Garpenberg in Southern Sweden, for which Rolf Jonsson and co-workers received an award in 2009 at Fennoscandian Exploration and Mining conference. 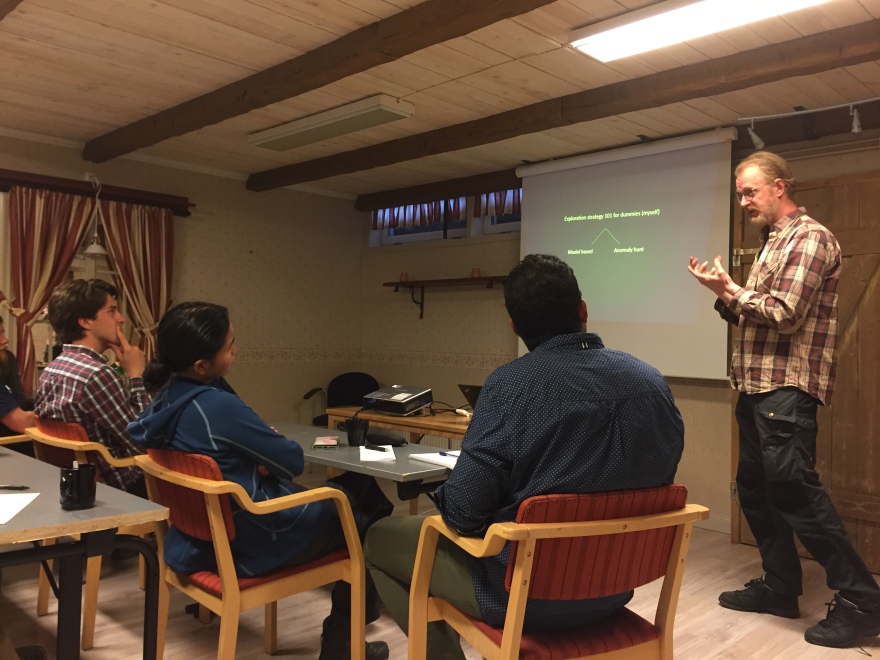 Consultant Erik Lundstam, who earlier managed Boliden’s Zn exploration in Sweden, further built on the importance of conceptual geological models on Tuesday’s talk, entitled “A random walk down next VMS discovery”. The talk emphasized that whereas activities in exploration and geological research may overlap, the end objectives are fundamentally different, and this difference must always be acknowledged. 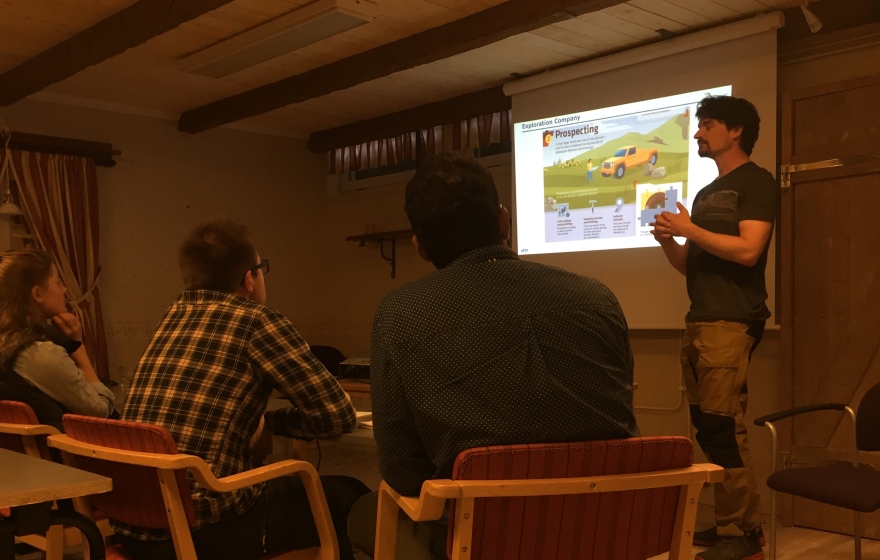 On Wednesday, Johannes Holzäpfel of EMX royalties provided a presentation of the business model of a junior exploration company. Whereas companies such as Boliden develop projects from the early exploration phase to mining, EMX focuses on early target generation and value generation, prior to attracting investors and partners to carry out the successive stages in exploration. 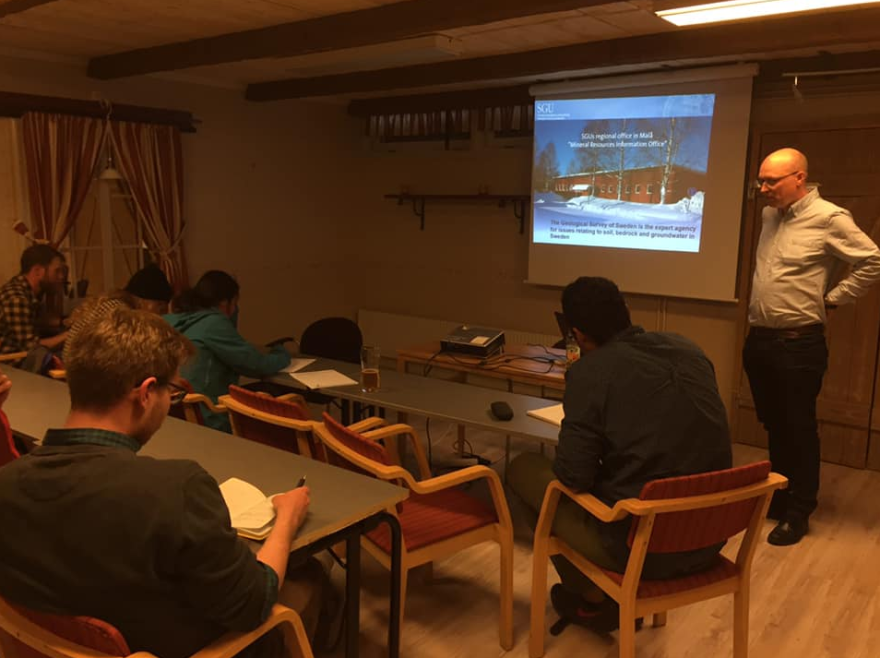 The last talk was given by Daniel Larsson of the Geological Survey of Sweden. The National Core Archive in Malå is a logical starting point and hub for most companies conducting exploration in Sweden. Almost 4 million meters of drill core are stored in the archives, in addition to a large library of legacy data and maps that are in the process of being digitized.
Publicerad:18 juni 2019
Uppdaterad: 18 juni 2019
Av:Richard Renberg
Redigera sidan , Öppnas i nytt fönster/flik