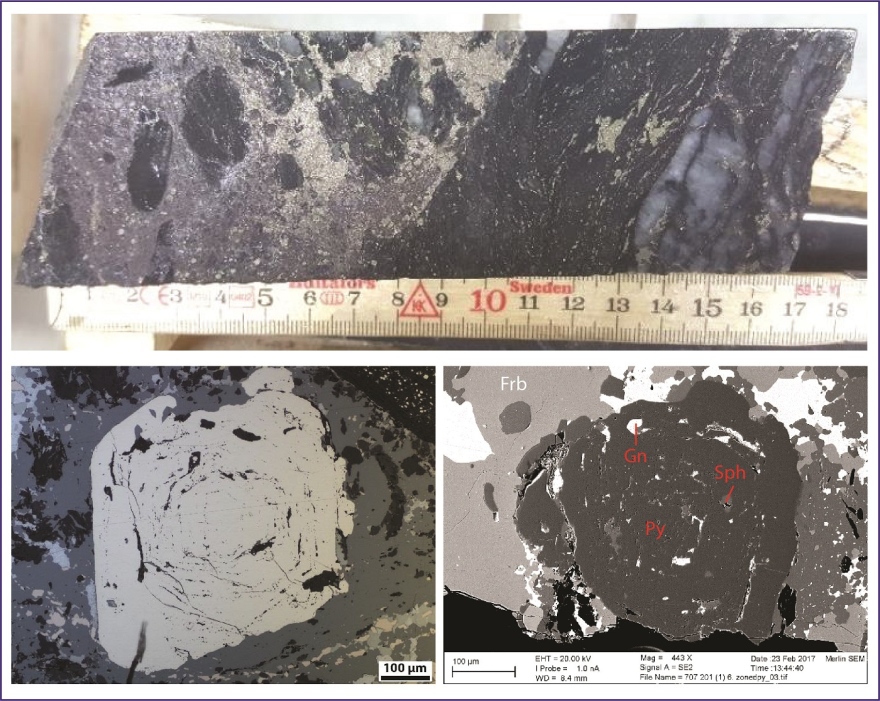 Since the discovery of the Kristineberg deposit in 1918, c. 85 deposits have been found and more than 20 deposits have been mined (Allen et al. 1996; Årebäck et al. 2005). Early 20th century exploration success in the Skellefte District largely resulted from a combination of outcrop sampling and boulder hunting combined with ground geophysical measurements. Towards the end of the 20th century as exploration went deeper, focus shifted towards an increasing emphasis on down-hole geophysical measurements and geology-driven conceptual exploration models.

However, exploration in the western part of the Skellefte District has proven highly challenging, largely owing to the presence of a thick succession of metasedimentary rocks belonging to the Vargfors Group stratigraphically and structurally above the favorable stratigraphic interval. A high content of graphite and iron sulphides in the metasedimentary rocks dominates the response of common geophysical exploration methods, effectively rendering them useless or highly ambiguous for direct detection of blind ore bodies. Lack of exposure of the underlying Skellefte group has furthermore made targeting solely based on conceptual models difficult and risky.

This has stimulated an interest in alternative methods for the deep exploration for blind ore deposits in this area, such as using geochemical and mineralogical criteria in the hangingwall to detect distal haloes of concealed mineralization. However, besides small reconnaissance studies, very little work has been done in the Skellefte District. In fact, no research project to date has specifically addressed if vectors to mineralization can be defined in the hangingwall metasedimentary rocks in the Skellefte district.

In-situ analysis of the trace element budget and isotopic composition of sulphides have become commonly adopted techniques for resolving problems in economic geology. Applications vary but recent examples include remobilization studies (Kampmann et al., 2018), ore genetic modelling (Gadd et al., 2017), determination of elemental partitioning (George et al., 2017) and inferences of  palaeoredox conditions in the depositional environments of ancient sedimentary rocks (Gregory et al., 2015). In particular, trace element data in e.g. pyrite has shown great potential for exploration vectoring in metasedimentary and metavolcanic rocks such as those in the Kristineberg area, since it can be used to distinguish ore-related sulphides from those that formed by ambient processes operating in the same basins (e.g. Mukherjee and Large, 2016). Despite this, only a few studies have generated comprehensive LA-ICP-MS data from Swedish mineral deposits (Axelsson and Rodushkin, 2001; Johansson and Wanhainen, 2010; Bejgarn, 2012; Kampmann et al., 2018).

Detailed characterization of the sulphide minerals in the halo and hangingwall rocks around Rävliden North will lead to a better understanding of primary trace element haloes around massive sulphide deposits, as well the development of secondary haloes and ore shoots during subsequent deformation and metamorphism. This understanding will aid exploration for hidden massive sulphide deposits in the Skellefte District and stimulate discovery of new deposits to help meet future needs for raw materials.

Meanwhile, a supply risk in critical elements in Europe has called for data on the trace element content in ore minerals in currently and formerly mined mineral deposits in Sweden (e.g. Wanhainen et al., 2017; Hallberg and Reginiussen, 2018). The massive sulphide deposits in the Skellefte District have been identified as potentially carrying high endowments of the critical elements Ga, Ge and In (e.g. SGU, 2011). Despite this, little modern work has been done on determining the trace element content of ore minerals in the district, and most modern summaries rely entirely on historic data. Owing to heterogeneity, it is generally impossible to translate single analyses to an entire deposit. More importantly, it can’t be said if apparent variations in trace element content between samples from different deposits represent true differences in metal endowment unless the variance in trace element content at each deposit has been addressed. More comprehensive datasets on the variation of trace elements between ore types in single deposits are thus needed, as opposed to the single analyses of grab samples from many deposits that are presented in historic reports.

The Rävliden project is jointly funded by Boliden Mineral and the Geological Survey of Sweden, and aims at producing a spatial model of the distribution and geochemistry (major and trace elements + sulphur isotopes) of sulphides in and around the Rävliden North deposit in the western Skellefte District. The model will be integrated with a temporal model of the history of crystallization, growth, recrystallization and remobilization of sulphides. Special emphasis will be placed on understanding the mineralogical and textural controls on the distribution of base, precious, critical and deleterious elements in the deposit, and how this impacts on the recoveries of these elements during ore processing. The results will also complement ongoing exploration in the area by increasing the understanding of the deposit genesis, as well as investigating the development of primary or secondary geochemical and mineral chemical haloes.