The role of the industry

Integration of biofuel production with existing industry was studied, as well as how different parameters affect biofuel production costs, the choice of technologies and biofuels, and the localisation of new biofuel plants. A methodology was developed considering inclusion of detailed, site-specific conditions for potential host industries in the spatially explicit BeWhere Sweden model. 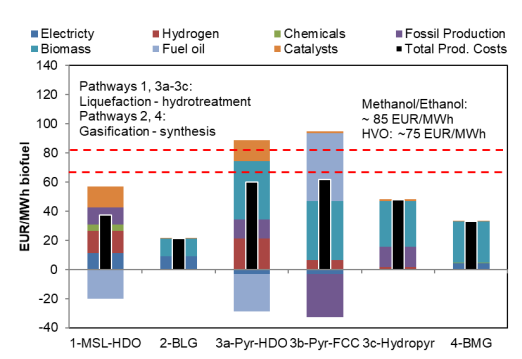 Biofuel production pathways that are seen as commercially relevant in the near future were evaluated. The pathways belong to either the liquefaction-hydrotreatment conversion route or to the gasification-synthesis route. A particular focus was put on integration with existing pulp mills and crude oil refineries. The results suggest that the income from biofuel sales is enough to cover the expenditure on commodities, thus all the pathways has a positive specific investment margin. 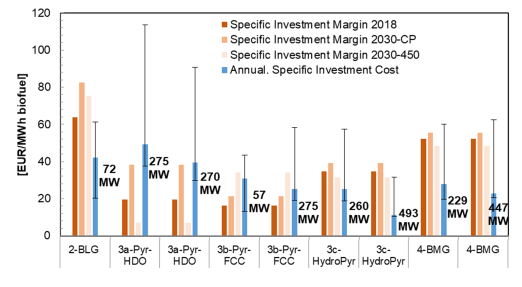 When comparing with investment cost estimates, both gasification-based and liquefaction-based pathways demonstrate relatively robust profitability for both current and future energy market scenarios and for different production scales.

Substantial total capital requirement for new biofuel production investments is needed, but alternative required industrial investments at the host sites can dampen the effects. The cost of biomass and the biofuel plant capital cost generally dominate the biofuel cost, but the cost for biomass transportation and biofuel distribution can also have a significant impact. Economy-of-scale and high biomass-to-biofuel conversion efficiencies provide the largest potentials for decreased production costs, which benefits large-scale gasification based biofuel production. This stands in contradiction against the current actual development regarding investments in biofuel production, where the trend is towards less capital intensive technology tracks, as well as towards drop-in fuels that can be upgraded in existing refinery infrastructure.